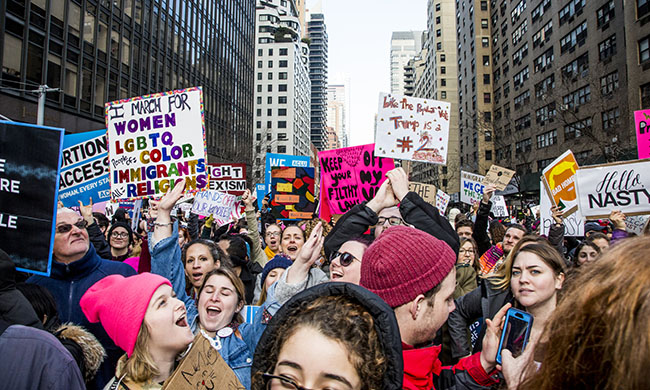 By a 38-point margin, millennials nationwide believe Trump should resign from the presidency because of sexual harassment allegations, five times the margin among older ages.

There’s a growing fear that angry divisions between Americans are driving the country toward uncharted danger. There’s evidence this fear is well-founded, but there’s a more hopeful pathway. Taking it requires rethinking one of our most ingrained prejudices: that the old are always wiser than the reckless young. Consider last week’s Alabama Senate election, whose results reiterated both the apparent gender and racial gaps liberal and left-wing strategists understand well and the generational split we have difficulty accepting. Voters ages 18-29 in deeply conservative Alabama rejected the candidacy of backward, slavery-supporting, accused sexual predator Roy Moore by 22 points, while voters 65 and older supported Moore by 19 points. On full display was the vast gulf dividing mostly older Whites whose tribalist views have changed little in 150 years from the urban-centered, younger multi-culture that embraces diversity and global connection.

Moore’s voters, like those of President Donald Trump, consist overwhelmingly of White men ages 25 and older and White women 40 and older. Every other demographic group, including young Whites and non-Whites of all ages, is going the other way.

In addition, the proportion of young women ages 18–24 who enrolled in or graduated from college rose from 49 percent in 1990 to 58 percent in 2016, outpacing young men. At the same time, rates of rape and violence victimizations have been declining, down 75 percent since 1994. These liberalized attitudes and massive behavior improvements occurred as the millennial generation became more racially diverse (half of them are expected to be of color by 2020) and young women gained education and status. These are exactly the developments progressives should be celebrating as proof that today’s divisions are just the difficult transition to a sunnier future. More important, they should be seen as a call to invite young people into genuine leadership roles, not just as token “junior” members of society, but as full equals.

Bring young people into the political process by reducing the voting age to 16.

One powerful innovation to bring young people into the political process is by reducing the voting age to 16, as Scotland, Austria, several Latin American countries, three Maryland towns, and Berkeley, California, already have done. Scholarly research supports this as rational and successful where it’s been implemented, and also a matter of fairness, because teens pay taxes, too. There are starker issues at work with adolescent voting and leadership. Youth in general are more adaptable and acclimated to a modernizing society, and as such are a vital antidote to older adults’ resistance to change and diversity. That dichotomy dominated the four-hour hearing in 2016 in front of the San Francisco Board of Supervisors on the proposed charter amendment to lower the city’s voting age to 16. Supervisors appeared surprised by the vehemence and variety of issues raised by young testifiers who vented their frustrations with disenfranchisement and clichéd odes to youth.

Many progressives remain mired in self-superior hostility to young people.

Despite the measure having support from local leaders, schools, civic groups, and voters of color, older White people were opposed, and that caused the amendment to fail 52–48 percent. The issue is expected to return in 2020, helped along by the city of Berkeley’s decision to let 16- and 17-year-olds vote in school board and bond elections. A major barrier to generational inclusiveness is anti-youth prejudices among the very progressives using the same negative stereotypes and generalizations they condemn when conservatives deploy them to voice racial, gender, and lifestyle bigotries. Many progressives remain mired in self-superior hostility to young people, led by liberal intellectual authors and editors in the Atlantic, Harper’s, New Yorker, New York Times Magazine, and others. Their authors regularly feature crude anti-youth regressions: Modern adolescents and college students are suicidal, crazed, hookup-obsessed, mean girls, appallingly greedy, brutally murderous, just all-around “terrible,” and on and on. It’s an irrational anger stemming from the “family values” playbook pushed by centrist Democrats like former White House advisor Rahm Emanuel and his Third Way program, which seeks to lure conservative White votes by summarily blaming young people for social ills.

Many elders are as ready for change, as are young people.

Cultural anthropologist Margaret Mead forecast today’s turmoil at the end of her long career. Traditional ethnic nationalism is in increasingly bitter conflict with emerging global diversity, she wrote in Culture and Commitment (1978). “It is only with the direct participation of the young” and their “new experiential knowledge … that we can build a viable future.” Forty years after Mead lamented “the alienation of the elders,” White alienation is driving bitter political crises so severe they threaten cohesive society. Tens of millions of far-right Americans actively seek authoritarian dictates and to harm entire populations because of their color, nationality, and lifestyle. Protecting threatened subgroups by developing more varied, inclusive cultures should be a central goal of progressive advocacy today. A dynamic new paradigm is needed that rejects youth-bashing among liberal/left commentators and broader right-wing bigotries. Mead was exuberant about the possibilities. “We can change,” she insisted, “… consciously, delightedly, and industriously.” Many elders are as ready for change, as are young people. That evolutionary tendencies favor the young invites long overdue intergenerational power-sharing to create local support for diversity, and usher in, as Mead said, “open systems that focus on the future.”

Mothers Dying After Childbirth Is a Medical Issue—But Cultural, Too

Why Science Says You Should Be Reading Small Independent Media