Sustainable food and farmingMindfulnessAging and dying 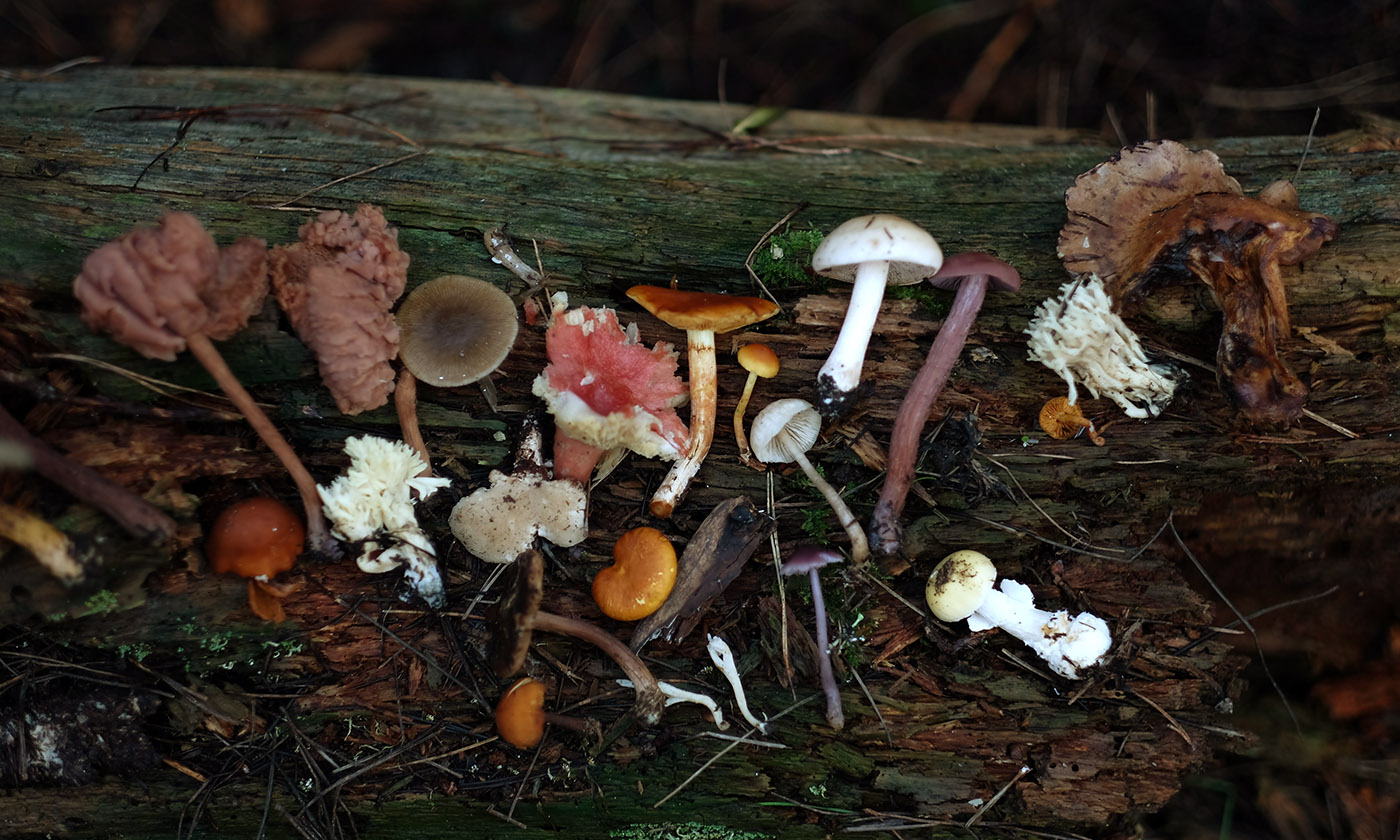 If there were fungi, and there always were, Patience was drawn to them.

Foraging for weeds and mushrooms with a visionary of the sustainable food movement.
By Adam Federman
5 MIN READ

In the 1960s, Patience Gray and her partner, the sculptor Norman Mommens, traveled across Southern Europe in search of stone quarries and a simple life unspoiled by industrialized modernity. Along the way, Gray learned how to cook, grow, produce, and forage traditional Mediterranean foods. The book based on her travels, Honey From a Weed, established her as a sustainable food visionary, an early advocate of cucina povera and the slow food movement. In this excerpt from his biography of Gray, Fasting and Feasting, Adam Federman describes how she expanded her knowledge of traditional foods while living at La Barozza, a rundown country house near Carrara, Italy.

Patience continued to study the edible plants and weeds of the region as well as the cultivated vegetables available in the marketplace—many of them new to her—supplementing what she had learned in Castelpoggio, Italy, and Apollonas, a village on the island of Naxos, Greece. Her friend, composer Alvin Curran, who sometimes wandered the hillsides with Patience, said that she was always scouring the landscape for plants or fungi. “She had this animal instinct that was absolutely astounding,” he said.

Although they had returned to Carrara and were just a few miles as the crow flies from Castelpoggio, the plant life of the sparely cultivated vineyards surrounding La Barozza presented an array of new species. As she had done on Naxos, she learned from children, old peasant women, and the occasional cook or innkeeper. She befriended Eugenia, a young girl with “an amazing weed vocabulary,” whose father worked one of the local vineyards and who served as her guide.

“She had this animal instinct that was absolutely astounding.”

According to Patience, Eugenia divided her plants into two categories: those that were cooked and those used in salad. Inspired by dandelion salads she’d eaten in Paris, Patience wrote to Tania that she was making her own salads using a variety of vineyard weeds. “There are kinds you cook,” she wrote, “and kinds for salad,” including the flowers of borage, wild rocket [arugula], white wall rocket, wild radish, burnet, and fronds of wild fennel. The plants and weeds near La Barozza tended to be more delicate—“small, perfumed, and crisp”—than those she was introduced to in Castelpoggio, where the hillsides were largely shaded by dense chestnut groves.

Unlike Naxos, however, Carrara also had a thriving open-air market that Patience visited nearly every day before heading to her workshop. In Honey From a Weed, she offered a eulogy for this market, which sometime after they left, “in the name of progress,” was removed to the town’s periphery. The market, near a 12th-century church, was “ruled by very old ladies” and crowded with pork butchers selling blood sausage, hams, and blocks of lardo; there were poultry farmers with guinea fowl, quail, and game; and fishmongers located in an alley at the bottom of the market, which “resounded with frenzied shouting.”

Most alluring to Patience were the vegetables displayed in the heart of the market: small winter artichokes, salsify, and the black roots of Scorzonera; spinach, cabbage, and wild chicory; white, green, and purple cauliflowers; and orange winter pumpkins. Retired quarrymen sold bunches of wild herbs gathered on nearby hillsides. There was a shepherd who brought fresh ricotta wrapped in beech or bay leaves down from the mountains to the city. “In those days,” Patience wrote, quoting Lady Blessington, “it was still possible to feel that the Carraresi were definitely in touch with the ‘earthly paradise.’”

If there were fungi, and there always were, Patience was drawn to them.

Identifying mushrooms remained a constant throughout her travels. If there were fungi, and there always were, Patience was drawn to them. On a visit to the birthplace of Michelangelo—“a pilgrimage inevitably offering a disappointment,” Patience wrote—they stayed at an inn where the evening meal was composed of three different fungi dishes: polenta served with a sauce made from the pared stalks of porcini cooked in veal stock; pork chops topped with the porcini caps, lightly floured and deep-fried; and large orange milk caps (Lactarius deliciosus) dressed with olive oil and roasted at high heat in the oven. The following day Patience accompanied the cook and innkeeper on a search for fungi, which resulted in a large jar of porcini sott’olio (fungi conserved in oil). A careful observer, Patience was also adept at extracting recipes from complete strangers. One afternoon in the mountains above Carrara, considered some of Tuscany’s best mushroom country, she came to a seemingly deserted hamlet.

Every ramshackle habitation was shuttered, the stone cobbles of the paths were rank with grass, the church roof had caved in; it was invaded by the stillness of the surrounding mountains. Turning a corner I came upon an open doorway and the stooping form of a very old peasant woman carrying a large curved and blackened frying pan in which were a heap of fungi.

I greeted her and asked how she was going to cook them. “In the usual way,” she replied reprovingly. She invited me into the kitchen, a space so bare it reminded me of Naxian rooms. All it contained was a small table, two broken chairs and a black cast-iron stove with pipe in the center of the room, a pile of sawn-up chestnut wood beside it. She began to slice up the boletus heads.

Only then does Patience come to the recipe:

She sliced them fine like tripe, simmered them in oil with garlic, mountain savory, thyme, parsley, seasoned them with salt and black pepper, added a spoonful or two of tomato sauce she had bottled and a little stock from boiling the carcass of a scraggy hen. This was simmered and reduced. When fairly dense, some grated pecorino was added—her lunch, eaten with some slices of rough bread.

It’s unclear if Patience joined her, invited or not, but one gets the sense that she did.

Patience still took great pleasure in the diversity of plant life around her.

Patience called the dish “Funghi Trippati, boletus cooked like tripe,” and the description illuminates how much her approach to cooking and recipe writing had changed in the years since Plats du Jour. It was now her larger experience, and not the many books she’d studied and, of course, still loved, that informed her outlook. The place, the people, and the methods of preparing a dish were all of equal importance.

The outline of a book based on those experiences, one that would be both a collection of recipes and field guide to the edible plants and weeds of the Mediterranean, was beginning to emerge. Indeed it was in Carrara during the latter years of the decade that she began to revise, expand, and prepare for publication Honey From a Weed, which was originally titled Fasting and Feasting. In a 1968 letter Patience described it as a book “about the approach to cooking experienced in all the wild places we have been living.” Even then she imagined it being much more than just a book of recipes. “I feel I have an experience to communicate,” she wrote.

Patience still took great pleasure in the diversity of plant life around her and was always identifying new species, edible or not, and making drawings or sketches of them. In a letter to Olive [her mother] in early spring 1966, she sent a watercolor of Arisarum vulgare, a member of the Araceae family and commonly known as Friar’s cowl. The arrival of spring, she wrote, had filled the mountain valleys with purple crocuses, flowering heather, and an abundance of salad plants. “Nature’s arrangements!” Patience wrote. “How wonderful. Makes gardening seem like knitting.”

This lightly edited excerpt is from Adam Federman’s book Fasting and Feasting: The Life of Visionary Food Writer Patience Gray (Chelsea Green Publishing, 2017) and is reprinted with permission from the publisher.

6 Simple Ways to Preserve Foods From Your Garden