Wealth and inequalitySustainable food and farming 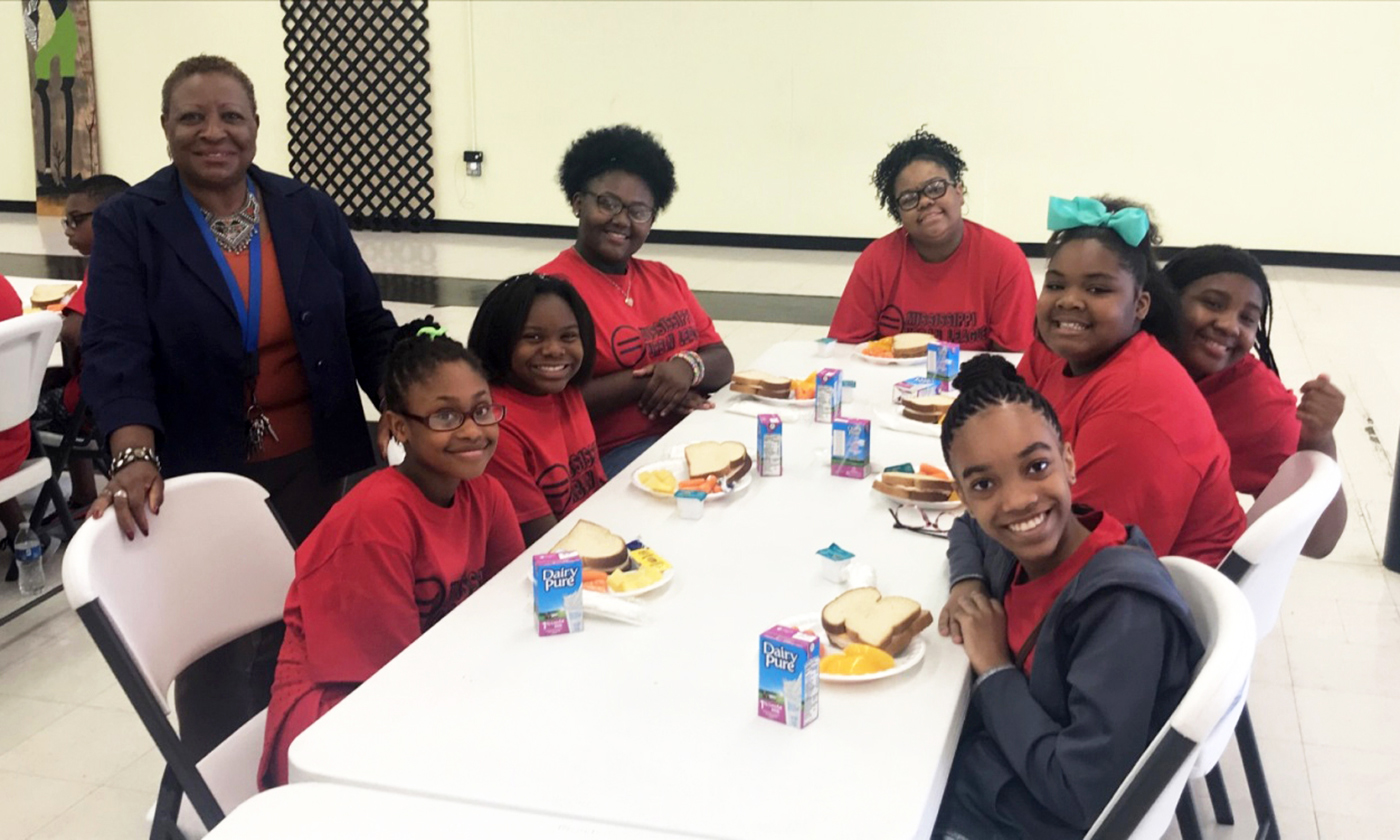 Photo from the Mississippi Urban League

Without free and reduced school lunch programs during the summer, many children go hungry. Local organizations and churches are stepping up to help to narrow the food gap.
By Tina Vasquez
6 MIN READ

Jasmine Caston’s weekdays begin before the sun rises. A single mother of two daughters, Caston works full time and goes to school. Every day is a juggling act. To be sure it goes well, she and her children need to be out of the house no later than 6:20 a.m. Nine months of the year, this isn’t a big problem. The girls are in school. But summertime? That’s a different story. A mythology surrounding school’s summer vacation days is that they’re fun and restorative for children and their families. But this mythology has rarely applied to low-income families of color, especially across the American South, where the rates of poverty and food insecurity in the country are highest. “As a parent at work, you worry about your children,” Caston says. “I have to work to maintain the bills, but it’s a struggle, especially to make sure the children are safe and taken care of. I get paid every two weeks and I make minimum wage.” After paying rent, bills, and transportation-related costs, not much is left, she says. Caston has spent her life in Jackson, Mississippi, a state that has the highest rate of child poverty in the nation at 30%. That number surges for African American children in the state, 46% of whom are in poverty.

The mother of two says she’s lucky. Her extended family helps out some. Last year, her parents assisted her with the $80/week fee for a local summer program. These programs can be a huge added expense for families, especially during the summer, when many families struggle with food scarcity. Breakfast and lunch are provided during the school year, but during those three months of summer, many parents struggle to find the funds for these meals. “When they’re at home all day during the summer, it takes extra money and extra food,” Caston explains. “When I was growing up, I remember my mom going to the grocery store three to four times a week. When growing kids are at home all day, they’re constantly opening the refrigerator. Breakfast, snacks, drinks, lunch, it adds up so fast. It’s such a struggle for parents.” The summertime meal gap is the result of access barriers experienced by families like Caston’s, including limited resources when schools are closed. During the school year, 22 million children receive free or reduced-priced meals through the National School Lunch Program, according to the organization Feeding America. When school is out during the summer, however, only 3.76 million receive free or reduced-price meals through the U.S. Department of Agriculture’s Summer Food Service Program. The SFSP is a federally funded, state-administered program that reimburses providers who serve free meals to children and teens in low-income areas during the summer months.

The summertime meal gap is the result of access barriers, including limited resources when schools are closed.

Many families, however, don’t know about the program. Other inefficiencies, such as the “the congregant feeding requirement,” which necessitates the children eat at designated locations, make the program less effective in some communities, according to the No Kid Hungry Campaign. But Feeding America, a nationwide network of food banks, operates several summer food service programs, with the help of SFSP funds, to assist low-income families who face hunger during the summer months. Last year, they served 10 million meals to more than 269,500 hungry children. And some churches and community organizations across the South are forming their own networks to try to end the summertime food gap, with funding from the state and local nonprofits. In Jackson, leaders make sure healthy and nutritious meals come with mentorship and educational opportunities for young people. This includes a free summer camp through the Mississippi Urban League. Caston’s daughters are enrolled in the camp, and she calls it “a blessing.” Beneta Burt is the president and CEO of the Mississippi Urban League, which for 15 years operated as the Mississippi Roadmap to Health Equity. Burt’s primary goal has been addressing health and food disparities in Jackson. While the Mississippi Urban League has long provided summer programs, only recently did the organization partner with the Mississippi Food Network to launch a food pantry, which feeds as many as 50 children breakfast and lunch during the summer.

Scholars are usually appointed to start the morning by leading group exercise activities. Photo from the Mississippi Urban League.

Burt says it would have been a missed opportunity not to include academic, cultural enrichment, and health and wellness activities as well. “As part of our program, we want young people to also learn important core values. So while it’s very important to us that they have two good meals a day, the other major component is academic and making sure we prevent learning losses during the summer months,” she adds.

Church members want to establish a relationship with all the children, and to let them know they are cared for.

This year, part of the summer program is being funded by 100 Black Men of Jackson, an organization that provides educational opportunities to young African Americans. Members of the organization have taught Caston’s daughters how to plant seeds and grow a garden. In previous summers, mentors with the program also took children in the camp to see the home of Medgar Evers, the civil rights activist and organizer who was assassinated at his home in 1963. Longtime Jackson residents whose children participate in the Mississippi Urban League’s summer programs said they weren’t aware the programs existed. By the time some learned about it, the programs were full. Capacity is an issue, but the Urban League helps the number of children it can. Burt says that if it weren’t for the program, dozens of kids would go hungry and would spend the summer months sitting at home, unsupervised, while their parents work. “We are lucky to offer all of the programming that we do,” she says. “It makes a huge difference in the lives of children.” In Atlanta, Radcliffe Presbyterian Church members have spent the past five years trying to address food insecurity in their community. Beginning in 2014, the church partnered with other congregations and organizations to serve dinner to families in need at a local apartment complex. A year later, Radcliffe began working with Georgia Nutritional Services, which receives USDA funds, to offer summertime lunches to children in the area. This means that each day, from 11 a.m. to 1 p.m., children under 18 from all over Atlanta can go to the church for lunch. After they eat, they can also play games and work on arts and crafts. Iris Wallace has been a member of Radcliffe for 25 years and assists with much of the food programming, including a “backpack program” during the school year that provides children with shelf-stable food items to take home in their backpacks for the weekend. These programs were born out of necessity, Wallace says.

Scholars participate in Agriculture Day where they learn about the importance of agriculture and even get to pick their own vegetables. Photo from the Mississippi Urban League.

When the church launched its food programs, the USDA reported that almost 25 percent of the children in metropolitan Atlanta were considered food insecure. Now, about 25 children use the summer lunch program at Radcliffe. Although some are from surrounding neighborhoods, most of the children are picked up by church vans from nearby apartment complexes. If more families dropped in for food or expressed interest in having their children picked up, Wallace says, they would expand the program to meet the needs of the community. As the kids file in the church’s door, Wallace and other members of the congregation greet the children and ask them how they’re doing. They want to establish a relationship with all of the children, and to let them know they are cared for. Doing this is just as important as the food, she says. While Radcliffe’s summer lunch program doesn’t require children to be members of the church or identify as any particular faith, the church uses Luke 14:12-14 as the “guidepost” for its lunch program, Wallace explained. “This [Bible verse] says that when you host a meal, you don’t invite your friends or your relatives or rich neighbors so that they will in turn invite you and you will be repaid. Instead, when you give a meal, you invite the poor… and you will be blessed,” Wallace said. “We are filling these food gaps, and it doesn’t matter what color you are, what language you speak, none of that matters. If you’re a child who is hungry, we will feed you.”

The Kitchen as Classroom: How Food Helps Students Learn Leadership