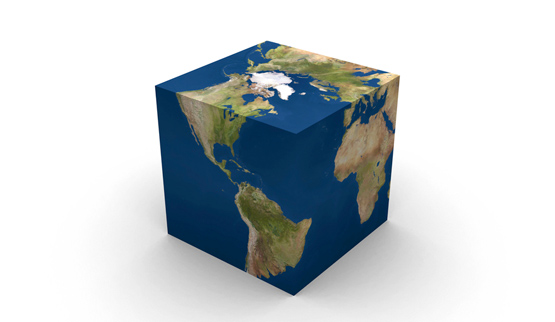 The attempt to solve our ecological and social crises through economic growth is a fool’s task, because both crises have a common cause: an infinite-planet, perpetual-growth economy has met the limits of a finite planet.
By Eric Zencey
3 MIN READ

OP-ED: This article is presented as part of New Economy Week, five days of conversation around building an economy that works for everyone. Today’s theme is “Expanding How We Think About What’s Possible.”

What is the core, the essential nub of the new economy movement that should be central to all of our messaging? I think it’s the clear, simple idea that our planet is finite and therefore it can’t long support an economy designed for an infinite one.

The old, infinite-planet, infinite-growth economy has met its limits and must change.

Infinite planet thinking has a long pedigree: from John Locke toward the end of the 17th century to Adam Smith in the middle of the 18th, the planet seemed capable of supporting expansion of the human estate for untold generations to come. In their world, vast reaches of the globe had yet to be mapped by Europeans. Humans everywhere were relatively scarce, their powers not yet global in scale, not yet amplified by extraordinary energies of coal and oil.

The 7 billion of us who are alive today live on a different planet. We need a new economy suited to the planet we have, not the one economists thought we had 200 years ago. We need an economy respectful of  the notion that there are ecological limits to economic activity.

But the new economy movement is about more than ecological sanity. We seek other practical and desirable outcomes, like:

We seek, in a word, economic justice.

That seems a very different goal than sustainability. But it isn’t, and conservatives recognize that the two goals are interrelated. The remedy they offer for economic injustice is the remedy they offer for environmental problems: more economic growth. Only if we are wealthier, their argument goes, will we be able to afford environmental reforms or solve the problem of poverty.

On a finite planet, an economy eventually encounters the source-and-sink limits of ecosystems.

The new economy movement must show—must insist—that the attempt to solve our ecological and social crises through economic growth is a fool’s task, because both crises have a common cause: an infinite-planet, perpetual-growth economy has met the limits of a finite planet.

When a financial system designed for infinite growth hits a local or planetary limit, it becomes a pump that sucks money from those who have less and then gives it to those who have more. On a finite planet, a perpetual-growth economy eventually encounters the source-and-sink limits of ecosystems, either transgressing them and causing species loss, climate change, and ecosystem failure, or crashing because the limit can’t physically be broken.

On a finite planet, population growth degrades our quality of life, further increases our economy’s ecological footprint, encourages technocracy, and produces an oversupply of labor that drives down wages, diminishing the middle class and dividing us into rich and poor, captains and serfs. The full range of new economy initiatives can be presented as stemming from one central fact: The old, infinite-planet, infinite-growth economy has met its limits and must change.

With repeated and creative messaging, the phrase “infinite planet thinker” will come to sound as outmoded and ridiculous as “flat earth theorist.” And when that happens, the principles and programs that the new economy movement seeks to advance will be on their way to general acceptance.

With an Economy that Worked for All, Mike Brown Would Still Be Alive

Welcome to Commonomics: How to Build Local Economies Strong Enough for Everyone

Day 2 of New Economy Week: Expanding How We Think About What’s Possible