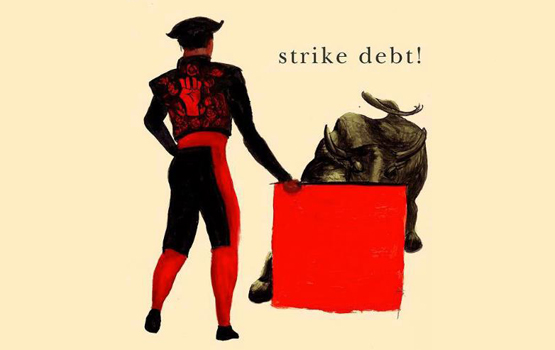 “It’s not about freeloading. It’s about what we’re willing to extend to each other as a society.”
By Araz Hachadourian
3 MIN READ

On Monday, 35 protesters from around the country marched on the annual conference of the National Association of Student Financial Aid Advisors (NASFAA) in New Orleans to bring attention to the issue of student debt—and the possibility of eliminating it with free higher education at the national level. The protesters collaborated with local Louisiana artists to intercept the NASFAA parade and force the advisers into a conversation about the student debt crisis.

Marchers were part of the group Debt Collective, an organization of debtors working to reform the system. Earlier this year the group organized a strike of 15 students who refused to pay back federal loans from the now bankrupt Corinthian Colleges, Inc. The campaign has since grown to 200 strikers in addition to students from other colleges like ITT Tech and Art Institutes. (On June 8, the Department of Education announced it would forgive the debts of Corinthian students who believed they were defrauded by the schools, a deal Debt Collective continues to challenge.)

“We don’t want to mortgage our future just to access education.”

In 2013, 69 percent of graduating college seniors in the United States had debt that averaged more than $28,000—and the number is on the rise, according to the most recent report from The Institute for College Access & Success. According to Debt Collective, at issue is the government’s focus on helping students pay for college instead of bringing the costs down. The group believes that if students who would not otherwise be able to go to college graduate into debt and a poor job market, loans are not helpful to them. “There’s a reasonable solution,” said Debt Collective organizer Laura Hanna. “We don’t want to mortgage our future just to access education.”

Beth Maglione, the NASFAA vice president of communications, said in an email that while the Association didn’t see why it was targeted, attendees were pleased to see grassroots advocacy for reducing debt. “NASFAA is proud to be one of several partner organizations working with displaced students from Corinthian Colleges to help them find a pathway forward” said Maglione. “Financial aid administrators across the country have been working to make sure no qualified student is denied access to a postsecondary education due to a lack of money.”

But according to Hanna, Debt Collective was not protesting NASFAA itself. She said protesting the conference was a chance to highlight the relationship the Department of Education has with groups that profit from student loans, like banks and collection companies. She described the financial aid industry conference as a “trade show” with booths sponsored by private businesses like Wells Fargo. “People are profiting and calling it aid,” she said.

Free tuition, according to Strike Debt, another organization that opposes the student debt system, would cost an additional $15 billion, or 1 percent of the federal budget (others put the estimate closes to $62.6 billion).

The issue is the government’s focus on helping students pay for college instead of bringing the costs down.

Free higher education is already a reality for most of the European Union—with varying levels of assistance—as well as in Mexico and Brazil. Some countries, like Iceland, charge small registration fees but cover tuition. Others, like Denmark, offer living stipends for students. In the United States, Tennessee and Oregon have passed laws making two-year colleges free for residents, and President Obama has vocalized his support for free community college.

The protesters in New Orleans were met with a few hecklers yelling, “Pay your fucking debts!” as well as advisers who don’t believe student debt is a crisis. But Hanna captured what countries that have already adopted universal education seem to agree with: “It’s not about freeloading. It’s about what we’re willing to extend to each other as a society.”

Debt Collective plans to continue the Corinthian debt strike and further educate students about their loans through debtors workshops.

Students for Climate Justice: We’re Not a Single-Issue Movement

Learning From Debt: How It Strengthened My Dreams and Brought My Family Closer