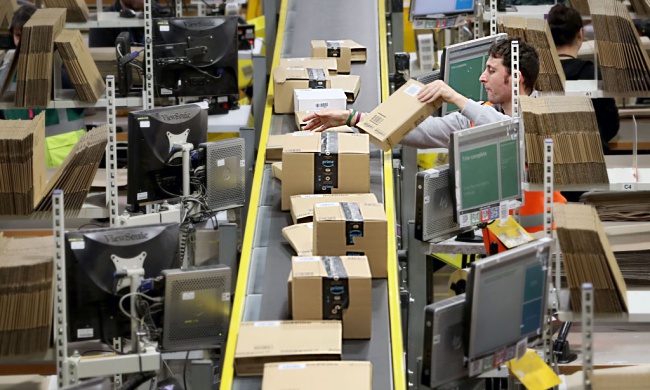 Amazon shares reached a record high of $1,213.41 on Nov. 27, and CEO Jeff Bezos became the only person in the world with a personal fortune of more than $100 billion.

Roughly 20 percent of U.S. workers are in a high-paying finance, technology, and electronics sectors. The other 80 percent face a daily struggle to survive.
By David Korten
4 MIN READ

As 2017 draws to an end, it is perhaps fitting that Congress chose to close out the year with the passage of a tax bill that does more to redistribute wealth to the already wealthy than any other piece of legislation since the Gilded Age.

The tax bill, as regressive as it is, isn’t new, but simply the logical outcome of our current economic system. In recent months, we’ve seen many examples of how this end-stage capitalistic system is playing out.

Forbes reported that the three richest Americans now are wealthier than the combined bottom half of the U.S. population. Amazon shares reached a record high of $1,213.41 on Nov. 27, and CEO Jeff Bezos became the only person in the world with a personal fortune of more than $100 billion.

At the same time, McKinsey Global Institute estimated that by 2030 automation likely will have destroyed up to 73 million U.S. jobs, and—not unrelated—the price of a Bitcoin hit $17,900, with the total market value of the electronic currency in circulation now reaching $300 billion.

These stories broke as I was pondering the message of Peter Temin’s recent book, The Vanishing Middle Class: Prejudice and Power in a Dual Economy. Temin examines the structural forces behind the deteriorating economic circumstances experienced by most Americans even as financial markets hit new highs and official unemployment statistics suggest the economy is thriving.

Temin notes that the U.S. economy has fractured into two sectors rather like the split between capitalist and subsistence sectors in traditional developing economies. Roughly 20 percent of U.S. workers are now employed in a high-paying finance, technology, and electronics sector. The other 80 percent face a daily struggle to survive on insecure, low-wage jobs in an everything-else subsistence sector.

When I was growing up in the 1950s, we assumed that a middle-class family could be supported by one adult with a secure 40-hour-a-week job. The family owned a home and a car, met daily expenses without consumer debt, expected its children would graduate debt-free from trade school or college, and looked forward to a secure and comfortable retirement. That lifestyle, once enjoyed by most white families, now requires an income at least twice the current median U.S. family income of $57,617.

It is striking how well the names “capitalist” and “subsistence” fit the two sectors of the current U.S. economy. Capitalism has always been about concentrating power to enrich the already rich. In capitalism’s latest iteration, the ideal is to make money without the inconvenience of producing anything of value or the need to pay anyone a living wage. This brings us to Bitcoin and Amazon—each an iconic expression of this ideal.

A current star in finance, Bitcoin’s only evident function is to create new fortunes based solely on a belief that the price of a computer-generated number will keep rising in a financial bubble. What differentiates Bitcoin from other financial bubbles based on more familiar fictional assets—like derivatives that simply mirror the price of real assets—is that it requires massive computer power—consuming more electricity per year than the whole of Ireland. Its success inspires other capitalists to invest real resources, including human talent, in creating ever more bizarre crypto currencies based on nothing but faith, all while the economy ignores the essential needs of the billions of people capitalism has consigned to the subsistence sector.

Amazon is another star in capitalism’s pantheon of concentrated power. While we may think of it as a convenient online retailer, it is actually a technology company that is rapidly monopolizing control of producer-consumer relationships. Its success rests on highly advanced forms of automation that strip retail transactions of most human interaction. This video of machines at work in an Amazon warehouse depicts a strikingly humanless future. At the least, as described by Wired magazine, it’s a world in which machines are in control:

“Entering the [Amazon] fulfillment center in Phoenix feels like venturing into a realm where the machines, not the humans, are in charge…. [T]he place radiates a non-human intelligence, an overarching brain dictating the most minute movements of everyone within its reach.”

We are dealing with the consequences of a collapsing system that puts the future of all at risk.

The pieces are fitting together. The financial and technology sectors are concentrating power by controlling our access to a means of living, the avenues by which we obtain the goods and services we need and desire, the instruments of our communications, and the news sources that frame how we interpret the events transforming our lives.

People with specialized skills remain essential to the sector’s ability to concentrate power. They are the ones in the 20 percent of the economy with pay and benefits that make for a comfortable life. But the number of well-paid jobs for that group of people will likely further decline as technology advances and capitalists further consolidate their power. The high-skill workers no longer needed by the economy will be relegated to the subsistence economy in which there is no middle class.

The process understandably angers the white people who once enjoyed a middle class lifestyle and the people color who for a brief time were assured that they soon would share in the American Dream. Both rightfully feel betrayed—a situation ripe for exploitation by Trumpian demagogues who empower themselves by turning the rest of us against one another.

We are dealing with the consequences of a collapsing system that puts the future of all—including Jeff Bezos—at risk. It cannot be fixed simply by increasing opportunities for a few women and people of color to briefly become equal opportunity exploiters.

As YES! Magazine recently reported, people across the United States and around the world are mobilizing across lines of gender, race, and class to grow solidarity economies. They are finding ways to earn their living by producing and exchanging goods and services that meet their needs while rebuilding community relationships to care for one another and their place on Earth.

These economies reduce our dependence on money while securing the well-being of those who do the real work of growing and preparing our food, educating our young, caring for our elders, and maintaining the systems that provide us with essential services such as housing, water, electricity, communications, and transportation.

It is an early step beyond both rapacious capitalism and repressive socialism as we begin the transition to a truly democratic society that functions in a balanced co-productive relationship with living Earth. A fitting project to unite us all in the new year ahead.

When Buying Nothing Gives You More of Everything