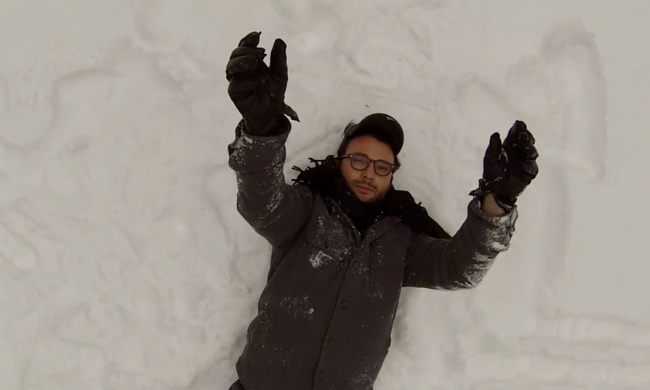 Josh Fox in How to Let Go of the World and Love All the Things Climate Can’t Change.

In his new documentary, Josh Fox says we can use love to push aside the fear and hopelessness that comes with climate change.

Why you can trust us
By Yessenia Funes
5 MIN READ

China’s smog-ridden skies have driven some people to rebel in the streets—even if their communist government punishes them severely for doing so. This is a country, after all, where Facebook is blocked and Google is censored.

Director Josh Fox discovered this first-hand when he headed to Beijing for his latest film, How to Let Go of the World and Love All the Things Climate Can’t Change.

“Human rights is the air that we breathe.”

“Even the nicest hotel room can turn into a prison,” he said in the film as a guard stood outside his hotel room at 4:30 a.m. Even on the streets in broad daylight, he and his crew were tailed by secret police who drove behind them in a white car. The film’s producer was detained, and the team nearly lost its footage. A trip that had set out to cover the polluting effects of coal quickly evolved into a segment on political repression and human rights.

“Human rights is the air that we breathe,” Fox says.

Three years after his Gasland series showed viewers the detrimental effects of fracking, Fox explores the hard truths of climate change and, recognizing the immensity of the struggle we confront, challenges us to let go of what can’t be helped.

Climate change has already set irreversible change into motion. Even if we cease extracting and burning fossil fuels immediately, untold damage has already been done. Fear, hopelessness, and apathy would seem to be reasonable reactions to this knowledge, but Fox suggests that we push those aside. He’s touring his film across the country, reminding people of a better option: love.

YES! sat down with Fox in Seattle to talk about democracy, civil disobedience, and, of course, love.

Yessenia Funes: In the past, you’ve done films on fracking, specifically. What got you interested in wanting to do a film on climate change?

Funes: How did you choose the film’s locations?

Fox: Well, the movie takes me all over the world. We went to six continents, all the continents where there are people. Some of that was very much intentional. Other parts we were just following the trail. This was a movie where I thought I was doing one thing, and, in the middle, it completely changed. I thought I was making a movie about climate change, and then I quickly discovered that climate change is in such a bad state, that we are so far beyond where I thought we were in terms of action, that I had to make a movie about what it’s like to understand that it’s too late in many ways to stop the most difficult and uncomfortable parts of climate change.

“We have to start to deal with the fact that very, very extreme changes are on their way.”

So we have to start to deal with the fact that very, very extreme changes are on their way and that the way we’ve set up society does not deal with that type of cataclysm in a way that is conducive to us not making it worse. Our system right now is based on greed. It’s based on competition. It’s based on violence. It’s based on consumerism. If we’re going to survive this climate catastrophe with any shred of human dignity, we have to start to change our values and base our civilization on different things: on resilience, on love, on community, on human rights, on democracy, on equality. Those are the things that the movie points to.

Funes: How do people go about doing that, though? In the film, you highlight some of the direct actions that frontline communities are engaging in.

Fox: Direct action is the most important tool we have right now. If all of us individually start to think, “Oh, I’ll put solar panels on my roof, I’ll do this, I’ll do that, I’ll change my light bulb,” that’s not adequate at this point. It’s too late for that. We actually have to have real systemic and real political change, and I think we’re seeing a lot of that in all sectors in America.

Funes: In the film, you take part in kayaktivism with Pacific Islanders. When was the first time you took part in something like that?

Fox: The very first time I was ever arrested, I think, was in 1999 or 2000 with the Rainforest Action Network. We were protesting Citibank’s loans to companies that were deforesting the Amazon. But I’ve always been a person who showed up to the protest rally, whether that was anti-apartheid rallies in 1985 when I was 13 years old or protesting the Iraq War.

“Direct action is the most important tool we have right now.”

If you don’t participate in those types of protest actions, don’t kid yourself that you’re actually a participant in our democracy because we don’t live in a democracy right now. We have seen that the oligarchs have so much influence over our politicians right now; only a groundswell of political action on the ground will start to take back our power in that system. So voting is not enough right now. You have to participate in other ways.

Funes: You end the film on a very heartfelt note: “I don’t know how to save the world, yet I must save the world. I don’t know how to save myself, yet I must save myself.” You give us the message in the film that there are things we must do, but ultimately there’s still that sense of hopelessness. How were you hoping that would resonate with people?

That’s the lesson I’m trying to say to people—not only fall in love with what you’re doing, but do what you love in the first place. And that’s what we need if we’re going to rebuild our civilization in the face of climate change.

My Climate Journey: Rebuilding Our Systems

The Language of the Climate Movement