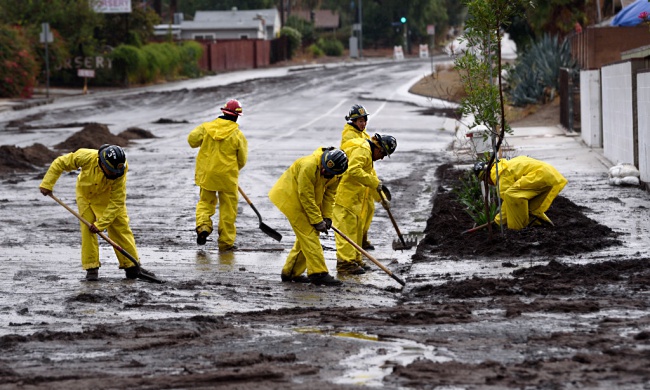 Firefighters clear debris from a mudslide in Los Angeles, California on January 9, 2018. The deadly rain storm claimed the lives of 13 people in Santa Barbara County. Flash flooding also occurred in the recently burned areas of Ventura and Los Angeles counties.

The Trump administration, and its allies in Congress, are fighting a losing war. They continue to press forward for the development of oil, gas, and coal when the rest of the world understands the implication of that folly. Global warming is the most pressing issue for our time. Period.

The thing is governments really have two choices when it comes to managing the impact on its people from global warming: spend money on trying to reduce the problem or spend money on cleaning up the catastrophes.

The Trump administration is on the hook for the catastrophe. A report released Monday by The National Centers for Environmental Information pegged the total cost this year at $1.5 trillion, including estimates for Hurricanes Harvey, Irma, and Maria. (And that doesn’t even begin to count the human toll, lost lives, lost jobs, lost opportunity.)

I witnessed firsthand the impact of Hurricane Maria on the island of Dominica last month. We keep hearing stories about the power grid being down (similar to Puerto Rico) and you think, Why? It’s been months. Why aren’t the lights on? Then you see nearly every electrical pole on the island sideways. The entire grid needs to be rebuilt (or better, rethought) and that’s decades of infrastructure. So the figure of $1.5 trillion is far short of what will be needed. Nearly every electrical line, every other house, the damage was so widespread it’s impossible to overstate. And that’s just one island. Multiple the effect across the region. The planet.

Even the United States.

The Centers for Environmental Information says there were 16 weather and climate disasters with losses exceeding $1 billion each across the country last year. These events included one drought, two flooding events, one severe freeze, eight severe storms, three cyclones, and one extraordinary wildfire. These “events,” as the center defines them, resulted in 362 deaths.

Turns out 2017 was a record-breaking year. “In total, the U.S. was impacted by 16 separate billion-dollar disaster events tying 2011 for the record number of billion-dollar disasters for an entire calendar year,” the report said. “In fact, 2017 arguably has more events than 2011 given that our analysis traditionally counts all U.S. billion-dollar wildfires, as regional-scale, seasonal events, not as multiple isolated events. More notable than the high frequency of these events is the cumulative cost, which exceeds $300 billion in 2017—a new U.S. annual record.”

A similar report was published by the Government Accountability Office, including a recommendation that Executive Office of the President “identify significant climate risks and craft appropriate federal responses.”

But instead of trying to reduce the impact—and the costs of weather-related catastrophe—the Trump administration continues on course for new development of oil and gas. The Interior Department announced new rules that, if enacted, will open up nearly all of the United States coastal waters to more oil and gas development beginning next year.

“By proposing to open up nearly the entire OCS for potential oil and gas exploration, the United States can advance the goal of moving from aspiring for energy independence to attaining energy dominance,” said Vincent DeVito, counselor for Energy Policy at Interior, in the news release. “This decision could bring unprecedented access to America’s extensive offshore oil and gas resources and allow us to better compete with other oil-rich nations.”

Or as Interior Secretary Ryan Zinke put it: “The important thing is we strike the right balance to protect our coasts and people while still powering America and achieving American Energy Dominance.”

Dominance is such a funny word. How can any nation be dominant in the face of hurricanes that are ever more powerful and destructive? How does energy dominance work when tens of thousands of Americans will have to move because their homes are no longer there because of fire or storms? What happens if that number grows into the hundreds of thousands? Millions? How can we afford to spend trillions of dollars rebuilding what we have now?

A group of elders on the Bering Sea immediately condemned the Interior Department’s offshore drilling plan. “We told them that in person last October and again in writing, that there were 76 tribes in these regions opposed to this,” said the statement from the elders. “The draft plan implies that Bering Sea communities were ‘generally supportive of some’ oil and gas activity. This is not accurate and there is no evidence of this from Bering Sea communities. For decades, our people have opposed oil and gas activity and we continue to oppose it today. The northern Bering Sea is a very fragile ecosystem. The marine mammals that we rely on use it as their highway and they follow specific migration routes. That is how we know when and where to find them. The noise and vibration associated with drilling will interfere with their sonar and disrupt their migrations. Then we the coastal people will lose our primary food source.”

There is a connection between developing oil and gas and paying the high costs to clean up after a storm. One side of the ledger goes to a few; the oil and gas “industry.” The folks who bought and paid for this administration.

The other side of the ledger is the rest of us. The taxpayers who will foot the bill for this continued folly.

And on the Bering Sea? The folks who live there are one storm away from a tragedy. As the elders put it: “Our people and our way of life are being exposed to danger and we do not understand why.”

Editor’s Note: This article was originally published with a headline stating the cost of climate change is $1.5 billion. The actual figure is $1.5 trillion. Corrected January 12, 2018.

The Ways Gratitude Can Also Make You Physically Healthier

How a Black Commons Could Help Build Communal Wealth

10 Things You Should Know About Socialism

Are Asian Americans White? Or People of Color?

After Thousands of Years, Western Science Is Slowly Catching Up to Indigenous Knowledge