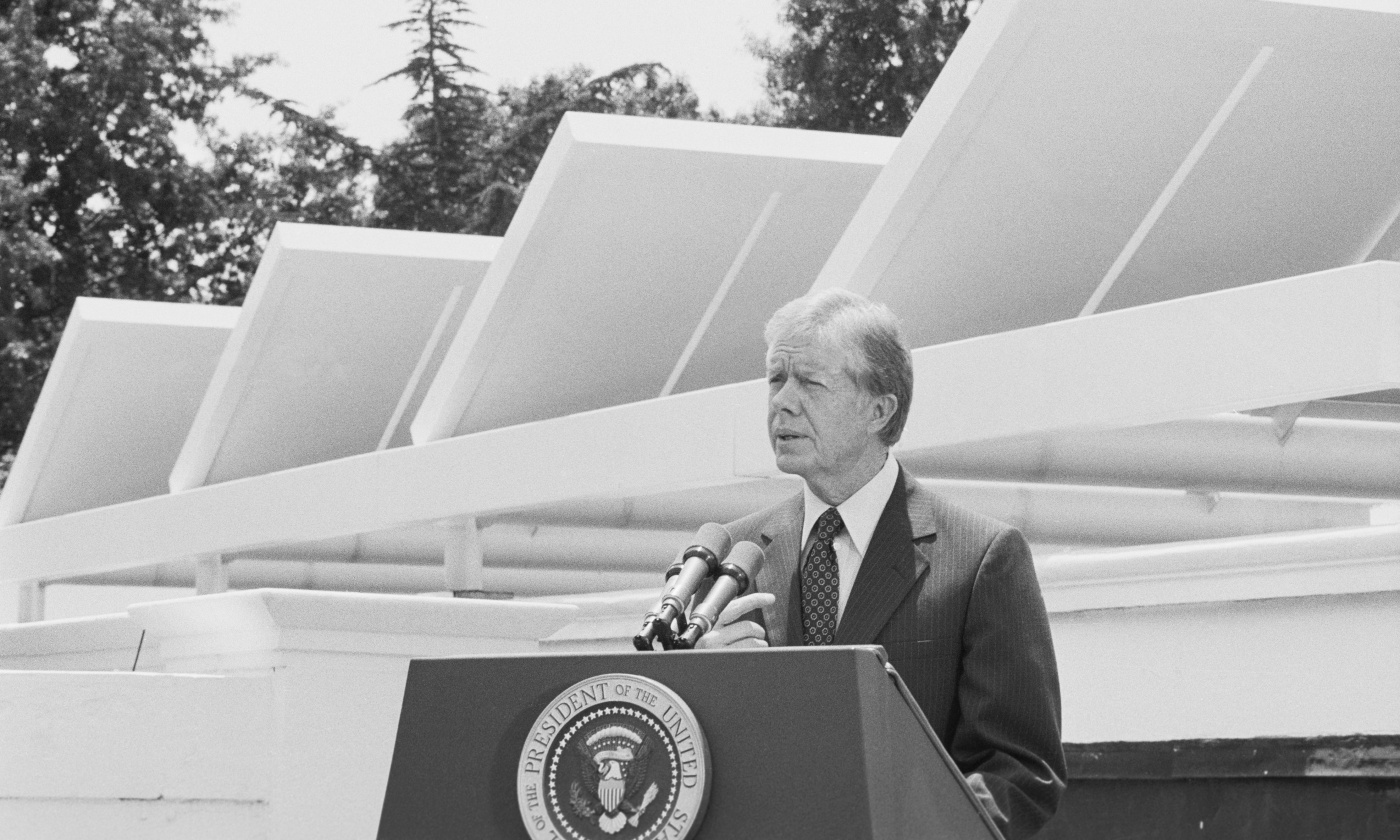 President Jimmy Carter believed in an energy future that was primarily one of renewable energy resources with a sharp increase in energy efficiency and conservation.

Policy expert Gus Speth talks about Our Children’s Trust’s lawsuit, explaining the U.S.’s longtime knowledge of climate change even as it pushed fossil fuels. But now we've got a fighting chance.
By Fran Korten
7 MIN READ

In 2015, 21 young people sued the U.S. government for promoting the fossil fuel industry even when it was aware of the dangers of climate change. In Juliana v. United States, the youths accused the government of endangering their future well-being thereby violating the government’s public trust responsibility and their constitutional rights.

The U.S. government has repeatedly tried to stop this case from moving to trial. Courts, including the U.S. Supreme Court, have denied or refused to rule on government challenges. The case is currently before the U.S. Ninth Circuit Court of Appeals on yet another motion to dismiss.

The suit centers on whether the government actively promoted the use of fossil fuels despite being aware of evidence that such action endangered the future of the planet. The youths, represented by the nonprofit Our Children’s Trust, retained experts to contribute supporting reports for the suit, including from environmental lawyer and climate policy expert James Gustave Speth. He reviewed what each administration from Carter to Trump knew about climate change and alternative energy and what actions were taken. Speth concluded in his report, which was filed in 2018, that every administration “continued full-throttle support for the development and use of fossil fuels.” This pattern is “the greatest dereliction of civic responsibility in the history of the Republic,” he wrote.

Speth’s advocacy for alternative energy pathways spans four decades. Under President Jimmy Carter, he headed the U.S. Council on Environmental Quality, which recommended pursuing renewable energy and energy conservation as means to reduce the threat of climate change. He is a founder of the Natural Resource Defense Council and the World Resources Institute and served as administrator of the United Nations Development Programme. He is currently a senior fellow at the Vermont Law School, the Democracy Collaborative, and the Tellus Institute, and a former dean of the Yale School of Forestry and Environmental Studies.

This interview has been condensed and edited for clarity.

Fran Korten: The U.S. government seems very intent not only on winning the youths’ lawsuit, but also on the trial not moving forward at all.

Gus Speth: The whole strategy of the government now for three years has been to prevent the trial from happening. I think they don’t want the spotlight put on all this information or on the threats to the well-being of this new generation, which is going to absorb all the shock of our neglect. It is important that the lawsuit is brought by young people, because it really makes everyone face the reality of the challenge. I just hope and pray that the case gets to trial. I think it will be a landmark in public education. And it could lead to a decision that would really galvanize action.

Korten: As you reviewed four decades of government knowledge and action on climate change, what did you conclude?

Speth: Every administration I looked at did a great deal to promote the continued use of fossil fuels at a very high level. No president has looked at that fossil fuel use curve and said, “You know, we have got to bend it down and get out of this business.” The percentage of U.S. energy that fossil fuels provides only went from about 90 percent with Carter to about 80 percent today.

Korten: You led the U.S. Council on Environmental Quality under Carter. Many of us remember Carter advocating turning down the heat and wearing sweaters. And he put solar panels on the White House. Do you feel Carter was personally convinced of the dangers of climate change way back in the late 1970s?

Speth: I think he believed that the federal government had to assert itself as a leader in energy policy and energy directions. He felt he had to reduce oil imports, which had skyrocketed in the period before him. That led to a whole series of actions to promote alternatives to imported oil, including greater use of domestic coal. But he repeated over and over that the long-term solution depended on developing renewable energy. He championed our Council on Environmental Quality report about what the U.S could do on solar and other renewables. And he set a national goal for the year 2000 of 20 percent of energy coming from renewables. He deeply believed in an energy future that was primarily one of renewable energy resources with a sharp increase in energy efficiency and conservation.

I know from speaking with him personally and from his public remarks that he understood the risks of climate change.

Korten: Let’s turn to Reagan. What happened to concern about renewables and climate change when Reagan came in?

Speth: Well, there really were two Reagans in this era. One was the initial Reagan, in which he had a very antienvironmental crew—James Watt at the Interior Department and Anne Gorsuch at EPA, among them.

The country was not crazy then, and there were good Republicans as well as good Democrats. People like John Chafee, a great Republican senator from Rhode Island. They pushed for the appointment of credible people—Bill Ruckelshaus at EPA and then his successor, Lee Thomas. Throughout much of the later Reagan administration, EPA and others put out numerous reports on the seriousness of the climate issue. Really good reports. The Department of Energy had a strong research program on it.

But Reagan didn’t pay any attention to them. His administration just went full bore for more fossils fuels. The ’80s were also the time when we first had compelling scientific evidence linking the theory of global warming to changes actually happening on Earth. This was brought forth in the testimony of [NASA scientist] James Hansen in 1982, 1986, and 1988. Three times he went to the Hill and testified, each time with more alarm that the Earth was changing due to the carbon dioxide buildup.

Korten: When did serious government opposition to action on climate change develop?

Speth: The opposition began to form during President George Herbert Walker Bush’s administration. It didn’t have to be too overt at that time, but it was very successful. It had top people within the White House who ensured that almost everything Bill Reilly at EPA would try to do on this issue would get squelched. Around this time, Exxon began its shift away from being a source of credible information on climate to supporting climate change denial, as documented by InsideClimate News in its report The Road Not Taken.

Korten: And when did climate change become so divisive in the broad public?

Speth: Ironically, an important shift occurred during the Clinton-Gore administration. They came in with a determination to make the issue a public concern. Al Gore had been a leader on climate. The polling suggests that their efforts tended to increase Democratic support slightly but that Republican voter support for climate action went in exactly the opposite direction. The Democrats and the Republicans diverged further, and that increased over time, driven by several factors, including a well-funded disinformation campaign taken from the tobacco playbook.

Behind all this is ideological opposition to government action, the great power of the fossil fuel industry, and America’s vast economic insecurity.

Korten: What president do you feel did the most to act on climate?

Speth. I think Obama did the most. His policymakers were developing regulations about methane that Trump quickly axed. They had a clean power plan that Trump’s been trying to get rid of. They put in fairly aggressive fuel economy standards for automobiles. But even if you add up the things that Obama was doing toward the end of his administration, they still would do less than the cap-and-trade plan that passed the U.S. House in the early years of his administration but failed to pass in the Senate.

Korten: Writing your report for the young people’s lawsuit forced you to reimmerse yourself in years of data about the increasing urgency of climate change accompanied by very little action. How was it emotionally for you to review all of that history of missed chances?

Speth: It was a very hard thing to deal with. I have said to people that this is the saddest story ever told, because the consequences are so huge and so long-lasting and so devastating. And we knew what we should have done. There were people in every administration who knew that what they were doing was wrong. So it made me sad, and it made me mad. It was also sobering in the sense that the climate activists had tried, we really tried.

Thousands and thousands of the smartest people in our country have pushed hard for 40 years, and to see so little actually accomplished is disturbing. We’re up against the huge power of the fossil fuel industry; the extraordinary ideological opposition to the federal government doing anything important; money going into disinformation campaigns that people readily bought into. And it’s still going on.

It is a sure sign in my view that we need to change the system of political economy in which we are struggling. It’s sobering, as I say. But not discouraging, because we’re still fighting.

Korten: Where do you think we are now on this issue in terms of public sentiment?

Speth: I actually believe that in terms of public awareness and getting something moving finally, we may have turned a corner.

It’s going to be a hard slog. But with all the events that have brought public awareness forward—fires and floods and much more—and the number of cities and governors who are now acting, something has changed within the past year or two. Progressive momentum on the issue has begun. But it has a long way to go. We are in such a hole and have so much power arrayed against action. There’s still so much misunderstanding and manipulated denialism.

Korten: What do you think ordinary citizens can do to help address climate change?

Speth: The important thing is for people to redouble their efforts. Now that we’ve got a fighting chance, we really have to fight.

We all should be engaged with a Green New Deal. I think one reason the idea is getting so much attention is that it is not just about climate and the environment. They are seeing the connections with other issues—the need to deal with impacted communities and create a huge new jobs programs and have a major infusion of finance into renewables and efficiencies and all kinds of retrofits. Bringing these issues together has created some real momentum.

Among other things, Green New Deal proponents see no problem with the government having the capacity to spend money into the economy to get these things done—quantitative easing for the planet, not just for the big banks. Lord knows where it’s all going to go. Opposition is already building.

Above all, to deal with the climate issue, we need a powerful movement of movements. And we need to get a lot more “in the streets” about it—a fusion of progressive forces that is activist and rambunctious and full of spunk and determination.