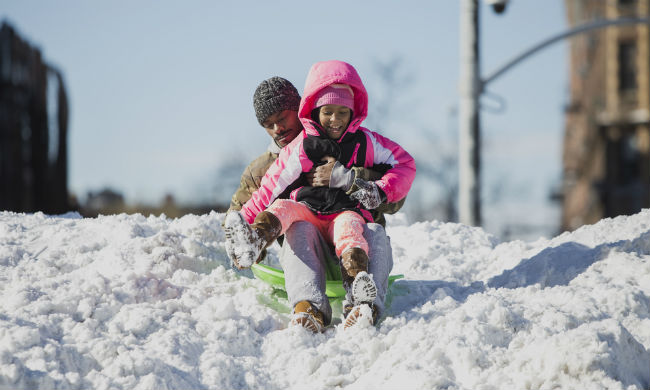 Photo by a katz / Shutterstock.com. Brooklyn residents on January 24, 2015, after a record-breaking blizzard.

Having fewer and slower cars on the streets where we live encourages neighborliness, makes us not only feel safer but actually be safer.
By Colin Beavan
3 MIN READ

Suddenly, what we all notice before even looking out the window is what isn’t there. No police sirens. No roar of garbage trucks. No rumbling cars. The cacophony of the internal combustion engine is gone. It is an incredible hush, except for the sounds you don’t normally hear so well in New York City: birds chirping, children shouting and laughing, neighbors talking.

If only it could snow more everywhere and bring us all to a stop to enjoy each other.

I open the front door of my Clinton Hill, Brooklyn, home, and everything is a blanket of white. Neighbors are helping dig out each other’s stoops from the 25 inches of snow that has fallen in this January storm, the third largest dump on record. I step out bundled and scarfed and walk down the middle of the road pulling behind me my daughter’s sled to meet her at her mother’s house.

Strangers huddle together over hot drinks they have brought out of their houses, just to be among other people. Neighborhood kids dig out people’s cars for $20—not that the cars will be going anywhere for a day or two. People walk around in sneakers and topsiders—New Yorkers aren’t geared up for this weather.

Something profound has happened. My friend’s 6-year-old son turns to her and says, “Mom, this is the first day I have ever really felt safe in New York City.” You might smile wistfully. Yes, snow is the answer to what ails us. If only it could snow more everywhere and bring us all to a stop to enjoy each other and connect with what’s around us.

But why wait for snow? What if I said we could have this visible community in the street, or some version of it, in any of our cities and suburbs and even during the hottest days of summer? What if it wasn’t necessarily the snow alone that turned New York City into a real-life version of Bedford Falls after Clarence gave George Bailey his life back in It’s a Wonderful Life?

What if it wasn’t the addition of snow, but rather the subtraction of cars?

What if it wasn’t the addition of snow, but rather the subtraction of cars?

Research tells us that in the United States, people on streets and sidewalks are killed by cars once every two hours and injured once every seven minutes. And 73 percent of the fatalities occur in cities. Meanwhile, streets with more cars traveling on them have higher violent crime rates because there are fewer eyeballs—people don’t hang out on trafficked streets. For that same reason, people who live on busy streets have fewer friends.

No wonder my friend’s 6-year-old felt safe for the first time when cars were—literally—buried. Or, as my own 10-year-old daughter put it, “Dad, I think people are happier when there aren’t cars driving around. They just don’t realize it.”

And of course, the data supports this. Train and bus riders are happier than solo-car commuters. Car ownership burns a yearly $12,000 hole in the average American’s pocket—money that could stay at home and be spent within our local communities. Obesity, heart disease, and diabetes are all correlated with car ownership. Not least of all, a transportation system centered on cars makes one of the largest contributions to the destruction of our planetary habitat’s ability to support us.

So here is my point: Snow days have more to tell us than that city-dwellers like snow and enjoy a day off. They demonstrate that having fewer and slower cars on the streets where we live encourages neighborliness, makes us not only feel safer but actually be safer. Streets without cars or at least with cars moving more slowly are better for everyone.

How do we get there? The reality is that not everyone can forgo cars. Rather, I am suggesting we let our elected officials know that we want the best of modern transportation technology—like the on-demand public transit Helsinki is instituting. We don’t want public money spent on perpetuating the old-fangled, 19th-century technology known as the car. We don’t want money invested in “smart car” technology, more roads, more parking. We want the money spent on a transportation system based on mass transit, walking, and biking that is so good we would gladly leave our cars behind.

And then every day could be like one perpetual snow day full of community connection. Or at least, we would be one step closer to it.

In Photos: 50 Years in a Housing Project Through the Eyes of Kids Who Lived There

Is Cooking the Future of Medicine?