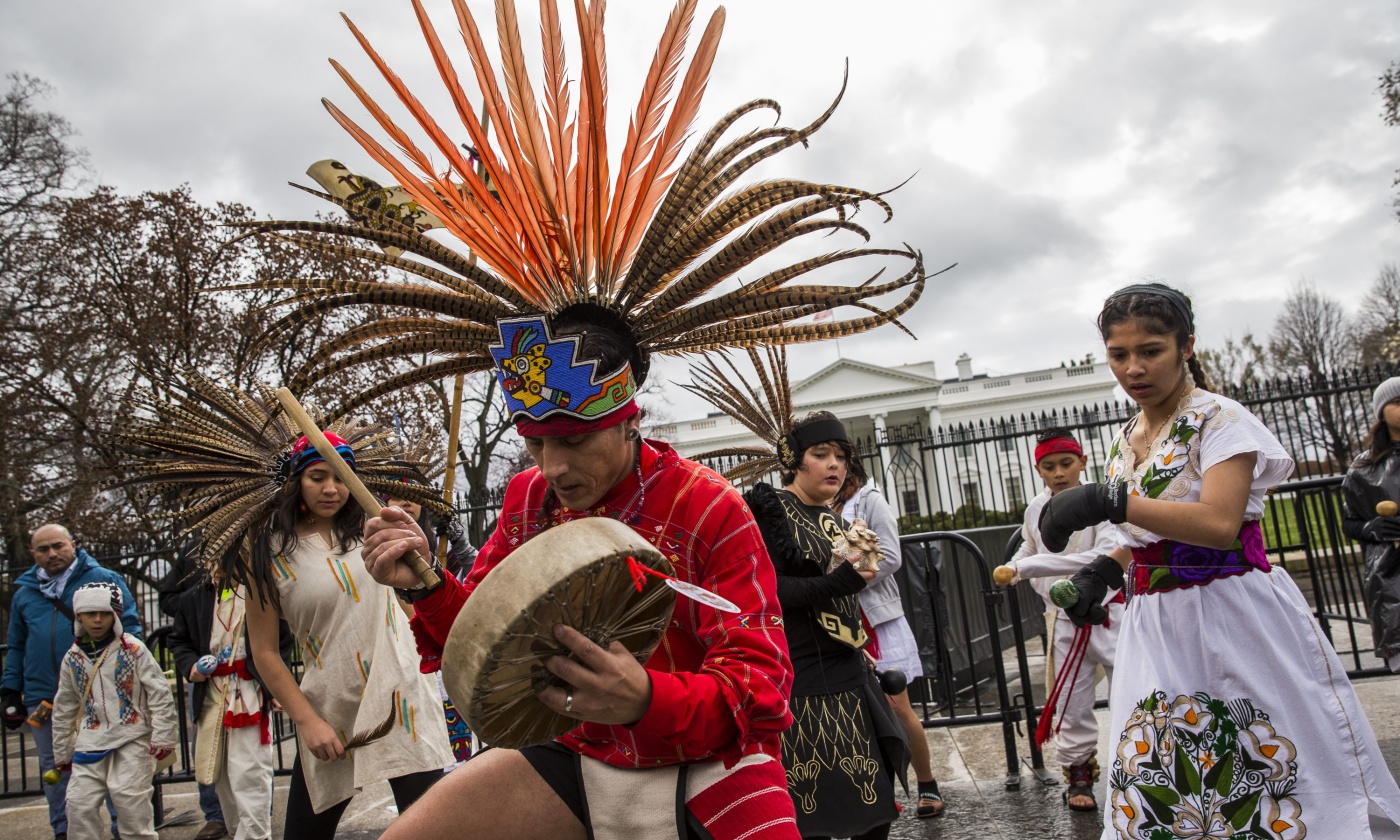 A group of Native Americans perform a traditional dance in front of the White House while protesting the construction of the Dakota Access Pipeline with members of the Standing Rock Sioux Tribe.

We must look at the roots of capitalism, white supremacy, heteropatriarchy, and anti-Blackness to leave settler colonialism in the past.

I am interested in freedom, not survival, and as kwe, I understand my freedom is dependent upon the destruction of settler colonialism.

I understand settler colonialism’s present structure as one that is formed and maintained by a series of processes for the purposes of dispossessing, that create scaffolding within which my relationship to the state is contained. I certainly do not experience it as a historical incident that has unfortunate consequences in the present. I experience it as a gendered structure and a series of complex and overlapping processes that work together as a cohort to maintain the structure. The structure is one of perpetual disappearance of Indigenous bodies for perpetual territorial acquisition, to use Patrick Wolfe’s phrase. I think the insight that settler colonialism is formed and maintained by a series of processes is important because it recognizes that the state sets up different controlled points of interaction through its practices—consultations, negotiations, high-level meetings, inquiries, royal commissions, police, and law, for instance, that slightly shift, at least temporarily and on microscales, our experience of settler colonialism as a structure. The state uses its asymmetric power to ensure it always controls the processes as a mechanism for managing Indigenous sorrow, anger, and resistance, and this ensures the outcome remains consistent with its goal of maintaining dispossession. It can appear or feel as if the state is operating differently because it is offering a slightly different process to Indigenous peoples. Goodness knows, we’d all like to feel hopeful. We’d like to see a prime minister smudging or acknowledging he is on Indigenous territory and have that signal a significant dismantling of settler colonialism. This is attractive to us because we know we experience colonialism as a series of entrenched processes and practices, particularly in our local place-based realities, and within our own thought systems we know that we can create change by shifting the practices with which we are engaged. If we experience settler colonialism as a structure made up of processes, when the practices of settler colonialism appear to shift, it can appear to present an opportunity to do things differently, to change our relationship to the state.

The structure shifts and adapts, however, because it has one job: to maintain dispossession by continually attacking Indigenous bodies and destroying Indigenous families. Neoliberal states manipulate the processes that maintain settler colonialism to give the appearance that structure is changing. They manipulate Indigenous emotional responses, for instance, to get us to support these slight shifts in process by positioning those who critique the state-controlled processes of reconciliation or the national inquiry into missing and murdered Indigenous women, for instance, as angry radicals who are unwilling to work together for the betterment of Indigenous peoples and Canadians. Colonialism as a structure is not changing. It is shifting to further consolidate its power, to neutralize our resistance, to ultimately fuel extractivism. Our history and our intelligence systems tell us we need to see this in the present.

Indeed, settler colonialism as a structure necessarily has to shift and adapt to meet the insatiable need of the state for land and resources. The processes of colonialism don’t necessarily look and feel the same every time, but we can’t be tricked. Intent matters within Nishnaabeg thought. Over and over again we watch our elders pray and explain intent to the spirits so that they will help and support them. The intention of the structure of colonialism is to dispossess. We cannot allow our processes, our emotions, or our intelligence to be co-opted and processed into the structure that is at the root of all of our problems, even if at the outset these processes appear to be kinder and gentler than those who have experienced in the past.

When I first began thinking about the Radical Resurgence Project, I struggled in considering whether resurgence was still a relevant and useful lens to frame the interventions I wanted to think and write about. On one hand, resurgent thinkers are a small group of Indigenous scholars and organizers, mainly West Coast based, who continue to write and think about resurgence theory. Few of us have taken up what resurgence looks like within nation-based thought systems. A lot of Indigenous scholarship ends with resurgence as the mechanism to move forward without adding substantively to the conversation of how to do this, and still others have talked about nationhood, nation building, and a recentering of Indigenous political thought without mentioning resurgence to any degree. There are some valid critiques, although rarely written of resurgence, particularly regarding gender violence and queerness. At one point, I considered if it would be relatively easy to write the same book without mentioning resurgence, just grounding my work more deeply in Nishnaabeg thought. The aftermath of Idle No More, and the election of a liberal government changed my thinking. I see a critical need for Indigenous organizing and mobilization more now than I did under Harper because of the subtle, yet powerful forces of neoliberalism demobilizing movements of all sorts and pulling Indigenous peoples into state-controlled processes to a greater degree. I see the natural world, one that I’m entirely dependent upon and in love with, crumbling beneath my feet with the weight of global capitalism. I see a radical transformation that has to occur not just for the Nishnaabeg but for other Indigenous nations as well. I wanted to find a respectful way of talking and thinking about issues that are difficult for us to talk about.

Resurgence has come to me to represent a radical practice of Indigenous theorizing, writing, organizing, and thinking, one that I believe is entirely consistent with and inherently from Indigenous thought. Radical means a thorough and comprehensive reform, and I use the term to mean root, to channel the vitality of my Ancestors to create a present that is recognizable to them because it is fundamentally different from the one settler colonialism creates. I am not using the term to mean crazy, violent, or from the fringe, nor do I think a trapper’s critique of colonialism by setting their traplines is a radical act. It’s also normal. It’s a valid critique based on direct experience with the system.

I am also not afraid to be radical, because when I hear stories of my Ancestors praying to the water every single day, before they had experience with pollution or with how bad things could get, I see these practices in my current context as a radical act of love. I think the epic nature of settler colonialism requires radical responses. Radical resurgence requires a deeply critical reading of settler colonialism and Indigenous response to the current relationship between Indigenous peoples and the state. Radical requires us to critically and thoroughly look at the roots of the settler colonial present—capitalism, white supremacy, heteropatriarchy, and anti-Blackness. Radical requires us to name dispossession as the meta-dominating force in our relationship to the Canadian state, and settler colonialism as the system that maintains this expansive dispossession.