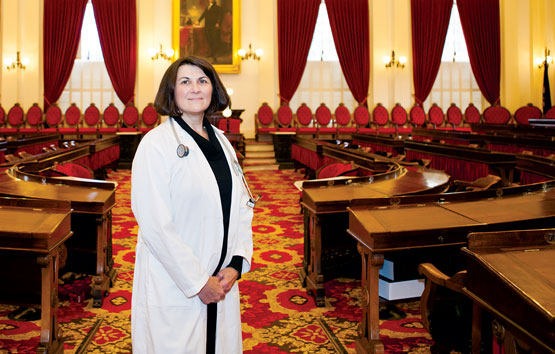 HOW TO BREAK THROUGH:
“I never felt like I had a choice about getting involved in this struggle … I couldn’t stop and I never will.”
Dr. Deb Richter

Meet the doctor who uprooted her life to bring universal health care to Vermont.

Deb Richter resolved to fix the health care system almost as soon as she began practicing medicine more than two decades ago in inner-city Buffalo. “I was very naive, I guess,” recalls Richter. “A lot of my patients didn’t have insurance. I would prescribe medicines for patients but they wouldn’t be able to afford them, and then they would just get sicker. I was mortified.”

It was the tragedy of a brother and sister who had been diagnosed with juvenile diabetes that brought things sharply into focus. “They kept up with their insulin and needles, but they often couldn’t afford the 50-cents-apiece test strips when they didn’t have insurance,” says Richter. By the time they became her patients, the siblings were in bad shape. The boy lost his vision, his health declined, and he died at 21. His sister had a fatal heart attack at 25.

Richter realized that she was facing a turning point. “I didn’t want to change where I practiced just so I wouldn’t have to witness this. I knew I couldn’t continue to practice if this situation continued. I didn’t want medicine to just be for wealthy people.”

Instead of hanging up her stethoscope, she joined Physicians for a National Health Program, a leading doctors’ group that advocates for universal health care coverage with just one insurance provider—the government. “What they had to say made sense to me—24 percent of health care was spent on paperwork and transaction costs. Other countries didn’t spend that.” She eventually served as the group’s president.

Richter became convinced that the likeliest route to a national single-payer system would be state by state. She and her husband and two young boys moved to Vermont in 1999, where they bought a house just two blocks from the statehouse in Montpelier. It suited a physician-activist who was raising a family. “I could testify before the legislature and walk home to do the laundry.”

Richter kept up her medical practice three days a week, while lobbying for a single-payer system the other two days. She cornered politicians, wrote editorials, spoke to Rotary clubs, and gave hundreds of talks. In 2005 the legislature passed a major health care reform bill, but the governor vetoed it. “That was one of my lowest points,” recalls Richter. Work and advocacy were taking up all her time. “I was hardly seeing my family. If we couldn’t get it done in Vermont, where was it ever going to work?”

Then Vermont voted in Governor Peter Shumlin, who recognized that skyrocketing health care costs had reached a crisis point for businesses and the middle class. The iconoclast Vermont politician Bernie Sanders moved from the U.S. House to the Senate, and was in a more powerful position to clear roadblocks at the federal level. Grassroots advocates focused their energies, as did Richter. This May, Vermont became the first state in the nation to pass a single-payer health care plan.

Richter is proud of the achievement, even though she concedes that Vermont’s health care bill is not quite comprehensive and could still get derailed before it’s fully enacted over the next six years. She continues giving public talks, shepherding the Vermont bill and lobbying for a national health care plan, as well as practicing medicine.

“This will be an enormous change for people without insurance,” says Richter of the Vermont bill, which will guarantee every resident an essential health benefit package from birth. “Now that we have this in Vermont, we need to make sure it happens everywhere.”