A Passion for Peppers: The Movement to Save New Mexico’s Treasured Chiles 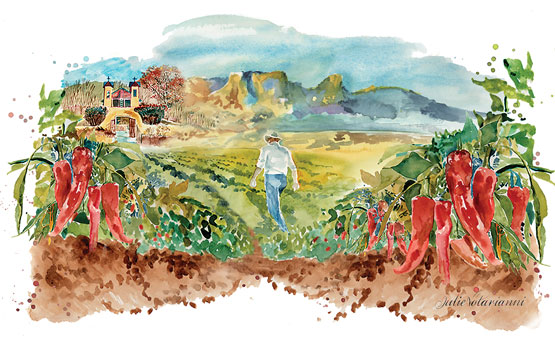 A Passion for Peppers: The Movement to Save New Mexico’s Treasured Chiles

Here in New Mexico, autumn starts with the smell of roasting chile. In parking lots and on roadsides, aproned vendors turn the cranks on rotating gas-fueled drums filled with fragrant chile peppers. Even as a young child, before I could get through a whole plate of my aunt’s spicy enchiladas, before I enjoyed my father’s piquant chile caribe, before undergoing the New Mexican rite of passage from tender-tongued child to ardent chile-eater, I savored the wafting smell of chile that enveloped my hometown every harvest season. It was then, and always will be, the smell I associate with shorter days, returning to school, wood-gathering time, and most of all, home. For New Mexicans, chile is more than just a food: it is an icon, a passion, a tradition.

Worldwide, we are losing traditional, local varieties of domesticated plants at an alarming rate.

But New Mexico is losing its traditional landrace varieties of chile, due largely to modern agribusiness and the societal shift away from small farms. “Landrace” is a term for domesticated plants and animals that have been raised in a specific area for long periods of time and have adapted to a particular region. They have a much broader genetic spectrum than modern hybrids, which are bred for a narrow range of specific traits. These older landrace varieties are remarkably resilient and their DNA is a valuable genetic resource, especially as we face climate change and increasingly unpredictable weather.

Worldwide, we are losing traditional, local varieties of domesticated plants at an alarming rate. The Food and Agriculture Organization of the United Nations reports that “Since the 1900s, some 75 percent of plant genetic diversity has been lost as farmers worldwide have left their multiple local varieties and landraces for genetically uniform, high-yielding varieties.”

Chile was first cultivated in Central and South America—the word chilli is from the Aztec language, Nahuatl. Spanish Captain General Don Juan de Oñate, who colonized the Rio Grande, is generally credited for bringing chile seed from Mexico in 1597. Since Oñate’s arrival, successive generations of Native and Hispanic farmers in New Mexico have been selecting and planting chile that exhibit characteristics favorable to their particular locale. Dozens of distinct chile landraces have developed along the Rio Grande Valley, each named for the place it has been cultivated: Cochiti, Escondida, Jemez, Puerto de Luna, and so on. And in the higher altitudes of northern New Mexico—where summer afternoons that soar to the 90s are often followed by nights that cool to the 50s—local varieties cope much better with the temperature range than lowland varieties.

It’s not just about survival. “The cool nights and hot days are what give our chile its incredible flavor,” claims farmer Matt Romero, dangling a specimen of his family’s Alcalde chile variety between his thumb and forefinger. He adds, “This chile is ready to harvest in 70 days.” I met with Romero at his farm in the village of Alcalde on a hot late-August morning. The Rio Grande rumbled just a couple hundred yards away, beyond an impressive stand of cottonwood and locust trees. Romero’s lush fields of cauliflower, eggplant, squash, and chile contrasted with the dry, naked bluffs rising across the river.

High-desert mountains, like the Sangre de Cristos that surround my hometown of Santa Fe and the Romero family farm in Alcalde, offer conditions that can augment greater levels of genetic diversity. I learned this one fall afternoon while I sat underneath a narrow-leafed cottonwood tree. I had taken my two daughters to Little Tesuque Creek so they could play on their favorite swing, a tire suspended by a thick rope from a large limb of the cottonwood. The creek is dry in early October, and autumn leaves filled the narrow creek bed. The girls shrieked in delight as they swung over the silent stream of leaves, golden in the glow of late afternoon, while I sat nearby in the sun and read.

I had taken along Gary Paul Nabhan’s book, Where Our Food Comes From: Retracing Nikolay Vavilov’s Quest to End Famine. Nabhan, a farmer, seed conservationist, and ethnobiologist, expands on the pioneering studies of Nikolay Vavilov, a Russian botanist and geneticist renowned for identifying the centers of origin of domesticated plants. In his global travels from 1917 to 1933, Vavilov discovered that semiarid, mountainous regions were ideal for fostering reticulate evolution, a process that requires a delicate balance between isolation and hybridization.

Nabhan explains that when seeds are dispersed into distinct watersheds, they become isolated from others of their own species by the harsher, non-arable terrain surrounding the watershed. This microclimate, with its various “bugs, birds, and microbes, places new selection pressures on the plant population, and it sooner or later diverges from its source population.” Seeds and pollen from other locations make their way into each isolated valley either by human hands or carried by animals, floods, fires, and high winds, providing a limited, but crucial, source of novel genes.

That golden afternoon, I put my book down and looked across the dry creek. I realized my girls and I were playing and reading in the very kind of watershed Nabhan describes. His description of reticulate evolution gave me a new understanding of the relationship between food and place. When Hispanic and Native farmers began planting the Aztecs’ chile seed, each watershed and valley was isolated enough that in the ensuing four hundred years, under the influences of both natural selection pressures and human cultivation, each landrace diverged from the original seed stock and each valley developed a slightly different landrace from the next.

Chimayó chile has adapted to cope with the diseases, pests, and drought patterns specific to the Chimayó valley; Jemez chile has the genetic information to survive conditions in Jemez, and so on. This diversity is valuable for sustaining our future food supply. Paul Bosland, Regents Professor of Horticulture at New Mexico State University (NMSU) and director of the Chile Pepper Institute, emphasizes that “the genetic diversity found in these [landrace] varieties will be very useful as the climate changes,” especially as we experience drier, more volatile weather.

Traditional New Mexican farmers are aging, and younger generations are abandoning farming. Those who do still farm find it hard to resist the higher-yield crop varieties that can bring in more revenue. But because modern hybrids like Big Jim or New Mexico No. 9 are selected for specific traits like thicker, straighter fruit or higher yield, they lose the complex genetic makeup of their progenitors. Homogeneity provides a more consistent crop, but increases a crop’s vulnerability to disease and difficult growing conditions.

But landrace crop varieties are going extinct, too, and just like the Dodo, once lost they’re gone forever.

Landraces are “fading fast,” explains Kraig Kraft, co-author (with Nabhan and Kurt Michael Friese) of Chasing Chiles: Hot Spots Along the Pepper Trail. “The problem is that, with the declining number of growers for each of these types, each population or variety of chile has fewer and fewer plants out in the field, reducing the genetic diversity in each.”

When modern hybrids cross-pollinate with landraces, the resulting seed is contaminated with some of the genes of the hybrid. A study by Bosland and his colleagues at NMSU explains that the landraces that made the newer New Mexico chile cultivars a commercial success have already been lost. Farmers either stopped growing them in favor of the new varieties or crops were “genetically ‘swamped’ through uncontrolled outcrossing” with hybrids in neighboring fields.

Extinction is often associated with undomesticated species—frogs from the Andes, birds from the Solomon Islands, medicinal plants from the Amazon. But landrace crop varieties are going extinct, too, and just like the Dodo, once lost they’re gone forever.

There are probably more landrace chiles growing in Chuck Havlick’s little experimental plot than in any other single location in New Mexico. As we walked along ridges and furrows, Havlik, an NMSU graduate student, pointed out the subtle differences between varieties with the tenderness of a loving parent. He hopes his studies will eventually help chile farmers “find more economic value” in their local varieties and that awareness of the landraces will help communities protect them for future generations. Havlik is hopeful; he believes there is a burgeoning market for place-specific food.

“These varieties have become cultural markers for small communities within the state,” he says. “There is passion in these communities for the chile they grow. There is pride.”

Even conventional farmers are slowly beginning to respond to the consumer trend toward local varieties. John Bunker, owner of Fedco Seeds in Maine, has made a name for himself in the last forty years saving old apple varieties and has developed a large and diverse following. He has even, as he puts it, “wormed his way into the hearts” of nearby conventional orchardists, even though they initially thought his obsession with old local varieties was crazy: “I got to know a few commercial apple growers over the years. They would frequently say that the old varieties were just yuck and that we should just get rid of them. Now my commercial orchardist friends say, ‘Hey, I sold all the heirloom varieties I had today. I could have sold twice as many!'”

When we support farmers by buying their local varieties, they have more economic leverage to continue their work.

This is the good news about preserving heirloom and landrace varieties—we have power as consumers and eaters. Whether we’re chile-eaters, apple-eaters, endive-eaters, or all of the above, we can seek out varieties specific to our region. Farmers markets and CSAs are gaining ground, and any eater should be able to be part of the Slow Food movement.

Matt Romero is proud of the Santa Fe Farmers Market’s robust food stamp program. He feels that many of the folks shopping at his stand know they could make their penny or food stamp go farther in a big box grocery store, but they choose his food because it’s local, fresh, tastier, and more nutritious. When we support farmers by buying their local varieties, they have more economic leverage to continue their work and plant the crops that can help carry us to a safer, more sustainable, more stable, more satiating food future.

It’s an especially cold, wet December. I trudge through ten inches of snow to the extra freezer we keep out in our shed for a bag of Romero’s Alcalde chile. The smell of it defrosting in the sink brings warm October afternoons into my kitchen.

As I watch my husband chop green chile with garlic and then add salt, much the way his mother did and his grandmother before her, I think of the stories behind this ancient food: how it was first cultivated alongside avocado and beans, how the Aztecs perfected the art of chile domestication and had markets filled with dizzying arrays of different varieties, how the Spaniards, not wanting to live without this new, adored food source, brought seed north with them to New Mexico, and how it has been shaped both by the people who have grown it and by the high-desert-mountain valleys that have sheltered it for the last 400 years.

This food has traveled thousands of miles, endured tens of thousands of fall harvests, and fed generations. This is one of the many ancient stories that accompany the food on our table. As my daughters, my husband, and I sit down to eat, I wonder: Will we continue to plant, eat, and save these old varieties? Will we honor their stories?