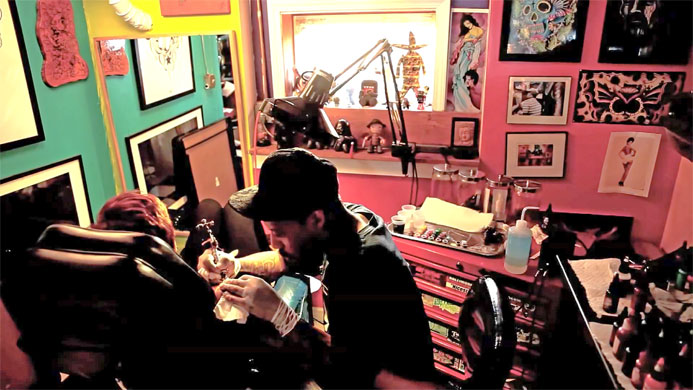 Still from the documentary Color Outside the Lines. Courtesy of Miya Bailey.

There are new ways to think about ink.

When most people think of veganism, tattoos aren’t top of mind. But many of the ingredients that make up tattoos are full of animal products: Inks can contain glycerin from animal fat as a stabilizer, animal bone ash for dark lines, and, in some cases, gelatin from animal hooves and shellac from beetle waste as binding agents.So when longtime vegan James Spooner opened his tattoo shop in Los Angeles seven years ago, he wanted to offer a service consistent with his political and ethical choices. Monocle Tattoo is believed to be the first and only 100 percent vegan tattoo parlor in Los Angeles, using animal-free alternative products in every step of the process. Spooner uses plant-based inks and animal-free aftercare soaps and lotions. “Being vegan is like breathing,” says Spooner. “It’s what I do.” and as a tattoo artist, he believes he’s leading by example, raising awareness, and offering a service that allows other vegans to, literally, embody their values.

Bringing out the beauty of healing

As a tattoo artist, Friday Jones is a kind of symbologist. She brings an education in philosophy, religion, and art to the craft, enabling clients to imagine and wear their internal narratives. Today, after more than 20 years in the business, Jones focuses on a specific client base: breast cancer survivors. Jones, based in New York City, and scores of other tattoo artists across the country partner with Personal Ink, a Colorado nonprofit that connects breast cancer survivors with professionals who specialize in post-operative tattoos. Jones aids in reconstruction by tattooing breasts to have the natural shape, color, and, with shading techniques, three-dimensional effect of a real nipple. She also tattoos full illustrative coverings over survivors’ scars, transforming one of the darker chapters of their lives into art. “These women want to look beautiful again in whatever form that takes for them,” says Jones. There is a certain healing through the process of getting a tattoo, Jones says. And for her clients, those designs turn a narrative of trauma into one of strength.

In the early 1990s, Miya Bailey was trying to make it as a tattoo artist in Atlanta. At that time, he said, he was one of only a few African-American tattoo artists working professionally in the United States. Amid police harassment and violent biker gangs, Bailey struggled to convince other African Americans to participate in the art form. It was “a hard time for Black tattoo artists,” he says. Bailey’s career took off at age 19 when he started an apprenticeship at West End Tattoo—known as the only parlor in Atlanta to hire African-American artists. Inspired by a new wave of tattoo artists who were bringing the world of fine art to a canvas of skin, Bailey developed techniques to make color inks visible on dark skin. He brought the basic principles of tattooing—“clean line work, smooth shading, and solid color”—and mixed them with a painter’s vision for Black clients. Today, Bailey is the co-owner of City of Ink, a tattoo shop and gallery with two Atlanta-area locations. He’s also a cultural force in his community: He produced the 2012 documentary Color Outside the Lines, chronicling the history of African-American tattoo artists. He has made his stores hubs for creativity, sponsoring monthly art walks.