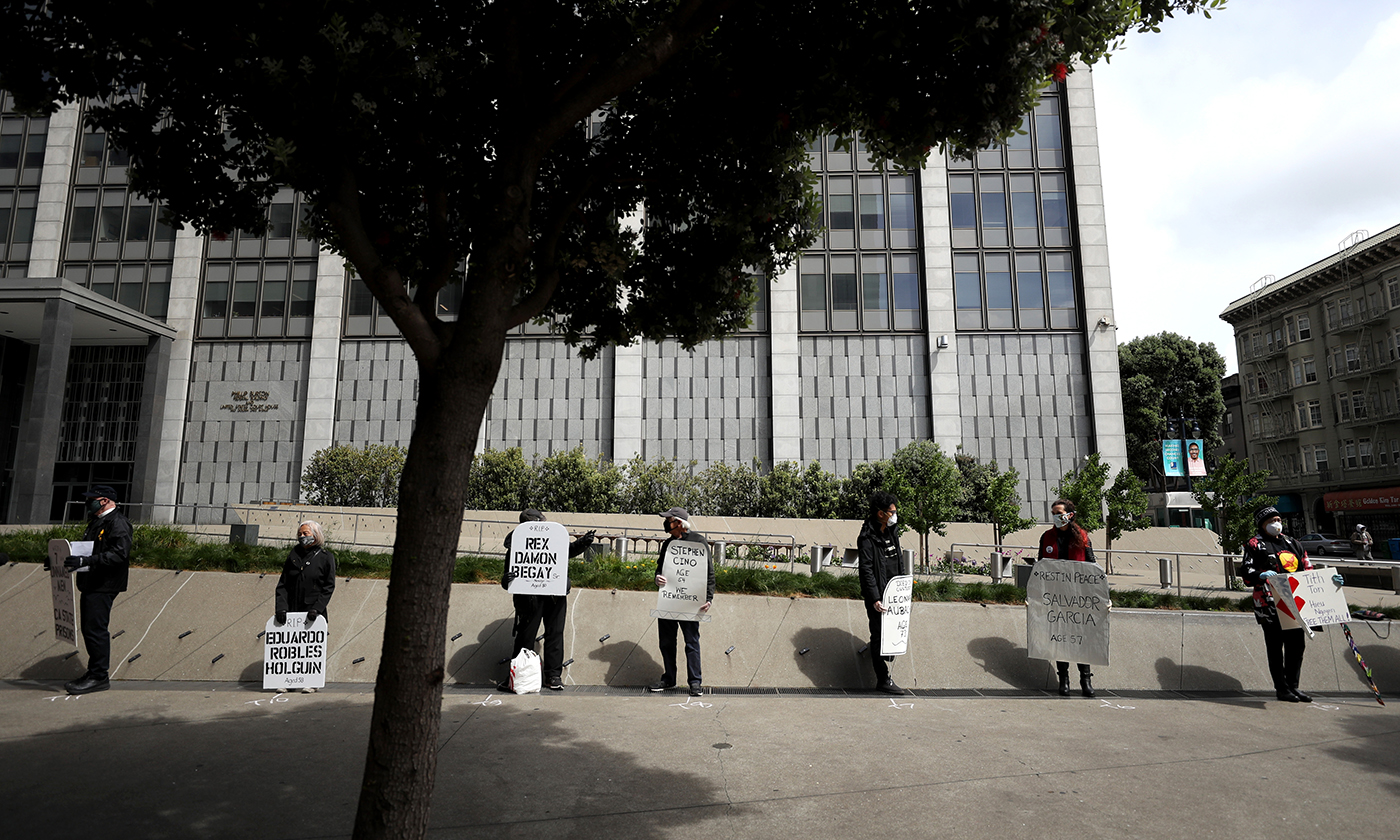 Faith leaders and activists hold signs and tombstone shapes as they hold a public memorial on May 12, 2020, in San Francisco, in front of the Phillip Burton Federal Building and U.S. Courthouse to honor victims of COVID-19 who have died while incarcerated.
Photo by Justin Sullivan/Getty Images

Here at the Washington State Reformatory in Monroe, four living units—each housing roughly 200 prisoners—share one recreation yard. And around this time of year, I could watch as teams gathered almost daily to compete on the soccer field or practice around the baseball diamond, as countless residents strolled the quarter-mile track, which surrounds both.

Outside the track, some played horseshoes, bocce, handball, basketball, and used the array of pullup and dip bars, while others sat at cement tables slapping cards and banging dominoes. Needless to say, our yard isn’t small.

All this changed in early April, after news that the first cases of COVID-19 inside a state prison had been confirmed at Monroe Correctional Complex, where the reformatory is. Courageous fellow residents, refusing to be bribed into appeasement with fast food, staged what would become the first protest at a U.S. prison over staff negligence amid the pandemic.

The incident on the evening of April 8 gained national attention as guards deployed nonlethal weapons against demonstrators in our minimum-security unit after they refused to return to their living quarters. It resulted in a mandate that staff be required to wear face masks while at work.

It felt like a victory to those of us who had lost our right to liberty. And though I didn’t participate, I was grateful to those who did, because, like them, I don’t want to die.

However, it was short-lived. The Washington State Department of Corrections responded by implementing restrictive measures under the pretense of promoting social distancing, and the number of bodies allowed in the recreational areas was drastically reduced.

Now three times each day, hundreds of us, desperate for fresh air and to bask in the sun’s rays—which we believed might neutralize this deadly virus, based on scientists’ claims we saw on television—sprint through the halls and crowd at the turnstile. We press into each other’s backs while a guard uses a handheld device to count us through. Once 150 of us have passed, the turnstile locks, leaving those of us not lucky enough to exit gazing out at our massive yet eerily desolate yard, before trudging back to the much smaller living units, which have remained perpetually crowded since these regulations were put in place.

The reformatory is more than 100 years old and was clearly not designed with the intention of protecting its occupants from the spread of a contagious illness. So the volume of residents packed indefinitely into such sparse units has made social distancing, for us, impossible.

We wear masks, but alcohol-based hand sanitizer has been refused, despite repeated requests.  Each living quarter has 10 phones and two kiosks, which provide access to email and video visits. The areas designated for waiting to use these devices are woefully inadequate, so crowds stand elbow-to-elbow waiting to make contact with loved ones.

Others, not wishing to spend all day in their 6-by-9-foot cells, flock to these areas to socialize. Arguments and fights have broken out over who’s next in line; more often than not, the phones and visit stations don’t work because the providers have become overwhelmed with more business than they can handle.

To date, at least 18 residents and nine staff members here at Monroe have tested positive for the virus, and one correctional officer has died.

It’s worrisome to think administration officials somehow don’t comprehend that the solution to crowding is spreading out. And it’s distressing, as well, to anybody taking Centers for Disease Control and Prevention’s COVID-19 guidelines seriously, because essentially the Department of Corrections has interpreted them in such a way that allows them to be weaponized and used as retaliation for having been protested against.

Whether or not their intention is to kill the population they’ve been entrusted to guard, their actions have clearly accelerated the spread of the virus in our community. Not long after they began implementing restrictions, coughs arose out of the crowds, units were temporarily isolated, and some of my neighbors disappeared. It was rumored—and later confirmed—they had been taken to segregation (the “hole”), and locked down with nothing but a couple of randomly chosen books to keep them company.

We later learned from an attorney on TV that the conditions our quarantined peers were living under were even worse than we had speculated. An ombudsman report revealed that residents had been forced to either drink mysteriously brown water from their sinks, or succumb to dehydration and possibly death. They had also been denied access to phones and showers, and provided with little to no information on whether or not their lives were in danger. Upon return—weeks later—those who tested negative claimed they would rather have been in the hole.

So as symptoms spread, my neighbors began concealing them. Most of us have experienced the psychological torture of segregation and have no desire to relive it for contracting a virus that was likely introduced into our home by DOC staff. At night, coughs still ring out, and during the day hoarse voices assert that they’re “just gonna ride out” the illness.

I recently listened to a reporter quote data from an Ohio state prison, where out of roughly 2,500 residents, about 1,800 tested positive for the coronavirus, and only about 150 experienced symptoms. These numbers have since been widely publicized and used to make politically charged points about whether or not it’s safe to reopen nonessential businesses. However, if what’s happening in my home is reflective of what’s happening in prisons across the country, then the number of symptomatic carriers is likely much higher, as prisoners are being motivated to hide their symptoms.

I can’t help but think that what’s happening here at the reformatory, and possibly in prisons across the country, stems from a mentality that places more value on power plays to keep us in line than on protecting human life. However, neither I, nor any of my neighbors were condemned to death (by any court) at the hands of angry prison guards. So if there ever was a time to have a conversation about this mentality, it’s probably now.

From Emergency to Emergence

Parenting During Coronavirus: Opportunities to Reconnect and Decolonize

Wave Goodbye to the Handshake

In Response to the Coronavirus, Governors Are the Real Leaders