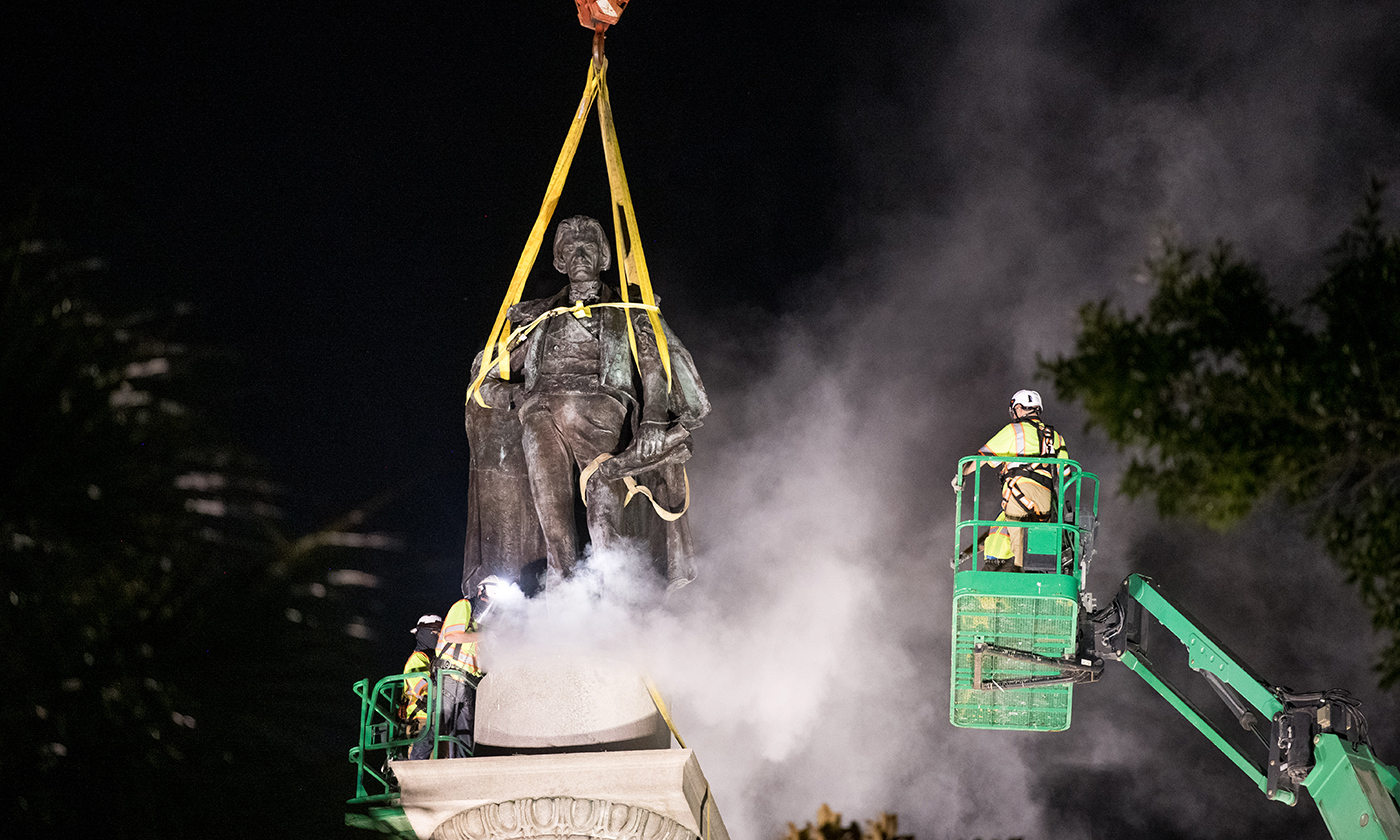 A worker uses a saw at the foot of the statue of John C. Calhoun atop the monument in his honor at Marion Square in Charleston, South Carolina. Work crews began taking down the monument on the evening of June 24, 2020.
Photo by Sean Rayford/Getty Images

When I toured the South Carolina Governor’s Mansion in 2019, I noticed the multivolume papers of John C. Calhoun on display. It struck me as remarkable that Calhoun’s ideas would be featured so prominently given his vigorous defense of slavery and his role in laying the groundwork for the Civil War.

But the reality is that Calhoun’s legacy until now has been quite prominent in American society—and not just in the South.

His statue stands between the two chambers of the House and Senate in the South Carolina Statehouse. However, a separate statue in Charleston has been removed from the town square after nationwide protests sparked by the killing of George Floyd during an encounter with police. The statue had stood for 124 years just a block from Mother Emanuel Church, site of the horrific shooting massacre in 2015 of nine Black worshippers by an avowed white supremacist. The church is also on Calhoun Street.

Despite his historic prominence, Calhoun’s days as a revered icon in the public sphere are gradually coming to an end.

Calhoun is all around us

Numerous cities and counties, streets and roads, schools, and other public places are named for Calhoun, a slaveholder who served as secretary of state, secretary of war, a U.S. senator, and two terms as vice president.

Counties are named for him in his home state, as well as Alabama, Arkansas, Georgia, and elsewhere in the South. There is even a Calhoun County in Michigan named for him.

Major streets in Columbia and Charleston still bear his name.

Despite his prominence elsewhere, Calhoun is about to become less prominent on the landscape of American higher education.

The board of trustees at Clemson University, a public university, announced June 12 that its Honors College would no longer be named after Calhoun.

South Carolina’s Heritage Act prevents renaming of buildings without legislative approval, but the honors college is an organizational unit, not a building.

This is a particularly significant development given that Clemson University sits on what was once Calhoun’s plantation, which his daughter and her husband, Thomas Clemson, inherited.

While public memorials of Calhoun appear to be on the decline, what I find more significant—and more troublesome—is the way that Calhoun’s ideology has been ingrained in the American culture and psyche—primarily because his ideas were embraced in U.S. institutions of higher learning long after his death.

I make this observation as a historian and author of a chapter for the forthcoming book, Persistence Through Peril: Episodes of College Life and Academic Endurance in the Civil War South.

Calhoun, who was born in 1782 and died a decade before the Civil War began, in 1850, was not only a slaveholder and an ardent defender of slavery, but a chief architect of the political system that allowed slavery to persist.

This idea is related to his belief in nullification theory, which is the idea that a state can void federal laws. Nullification made the idea of South Carolina seceding from the nation—and the creation of the Confederacy—a political possibility and then a reality.

Calhoun laid out his arguments for these ideas in his treatise “A Disquisition on Government.”

He held paternalistic views of Blacks as well as other nonwhites, declaring: “We make a great mistake when we suppose that all people are capable of self-government.”

Calhoun’s political doctrines were taught explicitly in college classrooms for decades after his death. Remnants are still in the curriculum.

His own views on nullification theory, states’ rights, and secession were formed when he studied at Yale University, where the college’s president, Timothy Dwight, introduced to him the espoused the idea that New England could leave the young nation and become a separate country. Yale named a residential college in his honor in 1931. It renamed it in 2017 after the intense pressure from students and alumni after the Charleston massacre at the Mother Emanuel Church.

In the chapter that I am writing for Persistence through Peril, I am explaining how Calhoun’s ideologies permeated Southern institutions of higher education. His views were taught at the Military Academy of South Carolina, before, during, and after the Civil War. When those cadets studied the U.S. Constitution, their professors and texts emphasized Calhoun’s interpretation of it.

John Peyre Thomas, a Citadel graduate and Confederate Army colonel who served as professor, superintendent, and later trustee at The Citadel, heaped praise upon Calhoun, having served as editor for The Carolina Tribute to Calhoun in 1857.

In a speech given at Clemson University on June 22, 1897, Thomas declared, “It is conceded that Calhoun’s standard in the science of government is so lofty as in some respects to be unattainable in our day and generation.”

Decades of teaching a particular doctrine do not fade easily or quickly. The United States is now witnessing another racial awakening with protests for social justice. Symbols of racism and white supremacy are being removed from higher education.

On June 17, the University of North Carolina-Chapel Hill Board of Trustees reversed its 16-year moratorium on renaming buildings, put in place after the statue known as “Silent Sam” was torn down in 2018.

After Calhoun’s death in 1850, his colleague in the Senate, Thomas Hart Benton of Missouri, remarked about him: “He is not dead. There may be no vitality in his body, but there is in his doctrines.” He was prophetic in his words.

Calhoun’s ideologies fueled the Civil War, gave comfort to those who believed in the “Lost Cause” (that is, to show the Civil War in the best light possible from the Confederate point of view), and perpetuated the teaching of racist and white supremacist attitudes.

Because the ideas he espoused have flourished, I believe that dismantling his legacy will take much more than just removing statues of his likeness or renaming buildings, streets, and other public places named in his honor.

As Non-Black POC, We Need to Address Anti-Blackness

Racial Microaggressions Are Real. Here’s How to Navigate Them