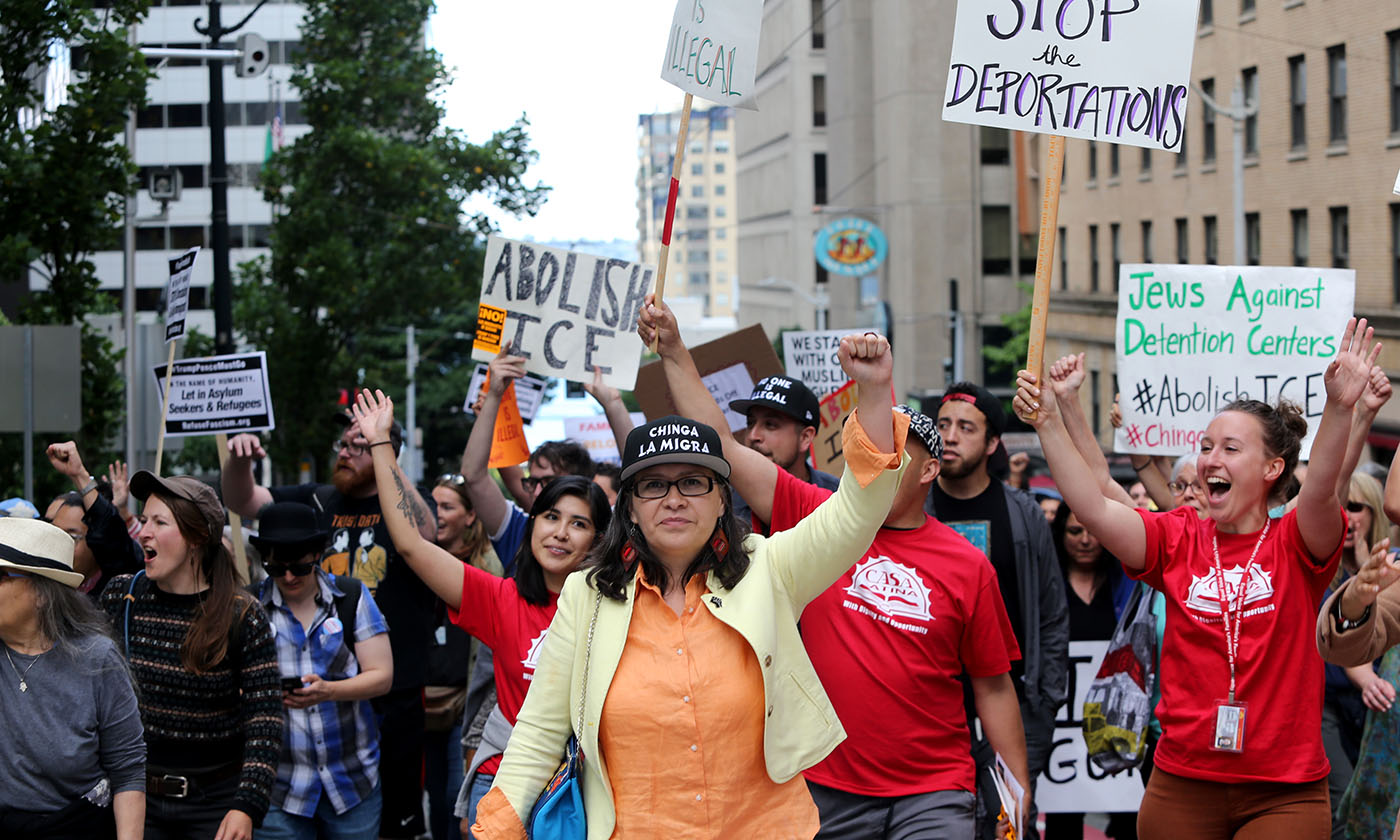 Immigration activist Maru Mora Villalpando marches with others after her second immigration deportation hearing on June 26, 2018, in Seattle. The judge decided to continue the case until January 2019.
Photo by Karen Ducey/Getty Images

Back in 2013, I started getting a deep, strong feeling that it was time to go public as an undocumented single mother. I was tired of the nightmare our communities were living day to day, feeling harassed and hunted like animals by U.S. Immigration and Customs Enforcement, ICE.

For a long time, I’d wake up every morning thinking, “It’s time, whatever it costs. It’s time to join the many other undocumented and brave people who have organized civil disobedience actions against deportations.” People spend weeks, months, and even years in detention—which is really a euphemism for imprisonment—before being deported to countries most of us were forced to leave in the first place. And every night I would tell myself, “I’m out of my mind putting my daughter at risk, putting the little I have at risk. I will lose everything.”

I kept seeing my community torn apart by ICE—La Migra, as we Latinx call them. I watched my people exploited while in detention, their families destroyed—the fear of what might happen growing, becoming the “wall” that prevents us from fighting back as a whole unit, as a community.

For years the rage built inside of me, transforming into an energy I could no longer contain. I had to find others who would agree to risk everything, risk our families if necessary, to say, “Enough! We are not going to let you make us afraid; we say no more!”

We choose this path, the difficult one, because it’s the one that would lead to real change and liberation of our people.

I couldn’t have known then that the action I was thinking of and organizing for months would lead to a larger movement in Washington state calling for an end to all detentions and deportations. The work of La Resistencia (formerly known as NWDC Resistance), has grown and morphed over the past six years as the needs of our detained community have changed. La gente del pueblo: grassroots with no class privilege.

We’ve supported hunger strikes and work stoppages inside and arranged video calls to prove the inhumane detention conditions people face. People detained have staged actions in the yard, such as spelling out SOS with their bodies for us to film. Of course, the ultimate goal is ending detention and deportations and ultimately shutting down the Northwest Detention Center, now known as Tacoma ICE Detention Center.

Now, in the midst of the global pandemic, our work has taken on a new level of urgency as we’ve joined ranks with other organizations across the country to demand a release of people in detention.

Organizing against detention in the U.S. state where the COVID-19 pandemic first emerged made us realize early that we faced a new emergency: Notorious for its unsanitary conditions, the Northwest Detention Center is a tinderbox ready to explode. My almost daily calls from inmates have become more frantic as people learn of positive COVID cases in detention centers across the country and within the detention center itself. They know there is no medical care at the facility, and now they are afraid of contracting COVID-19 and dying in lockup.

As organizers on the outside, social distancing presented many challenges: What do we do, now that we can’t gather in large numbers outside the detention center? How are we going to organize and use the only tool we have—public pressure—without being able to visualize public support? How do we bring media attention to this plight when the virus touches every single part of life, and as usual, most people want to forget about those imprisoned?

Early on in our work organizing around detention—stopping deportation buses and blocking the streets in front of the detention center—I imagined that I’d be detained for my activism and could then organize from inside. How arrogant of me to think people weren’t already organized inside—amazing and brave people willing to risk everything to bring attention to the violation of human rights occurring there daily. I learned to follow their lead and listen to their demands.

We are again following the guidance of those detained to learn how to respond to this crisis. We began putting pressure on local institutions and elected officials, but not surprisingly, were dismissed as a distraction. COVID-19 has exposed the lengths to which ICE will go to keep people in cages.

But anyone who knows our work knows we are relentless. We’ve held multiple “honk-in actions,” with car caravans more than 20 vehicles long to the center. We park in front of the detention center and, while remaining in our cars, honk nonstop for an hour. Drivers have signs all around their cars, reading: “Free Them All” and “NWDC is the public health emergency.” We documented deportations one morning that showed guards not keeping social distance, or wearing gloves or masks.

I could easily have been among the ranks of those detained. I’d been drawn to the U.S. by some of the same forces that drew many of them here—economic distress caused by U.S. policies in our countries, political unrest, and retaliation against those who dare speak up.

Arriving in the mid-1990s, I tried to survive as other immigrants do, taking odd jobs as a nanny, serving food, and working in retail stores. I gave birth to my daughter and shortly after began my activism work in the early 2000s.

I knew I was placing myself at risk, which is why I never publicly disclosed my status until 2014. In December 2017, I received a notice from ICE to appear before a judge—ostensibly beginning deportation proceedings against me. Two years later, I’m still facing deportation.

Through La Resistencia, I learned to fight back. The late amazing organizer, Don Cipriano Rios Alegria, who was detained at Northwest Detention Center, once told me when addressing retaliation by ICE and hunger strikes: “What are they going to do to us, deport us?” We laughed together, and I hold dear that lesson wherever I go.

We understood we were not there just to take a strong stand against detentions. We needed to address the daily emergencies that imprisonment generates: hunger, illnesses, despair. We began a long-term strategy combined with a short-term response: fight for the release of all people and shutdown of the facility while trying to address daily survival.

We began selling T-shirts to sustain our almost-daily actions outside the facility, and then switched to using that money to create a “community fund.” With that fund, we deposit money into the commissary accounts of people detained so they can call relatives, buy some decent food, or purchase other things needed and not provided by Geo Group Inc., which operates the detention center.

We also began creating individual campaigns for people with medical emergencies, working with their families and—in the rare cases when they have lawyers—working with their legal teams. We developed teams that are in daily contact with people detained to exchange information about what’s happening both on the inside and outside.

We institutionalized the now-monthly “solidarity days,” rallies or small actions right outside the detention center to let visiting families know we are here—and aren’t going away. Our work has included exposing and fighting against many parts of the deportation machine, including deportation flights.

In 2019, we began a successful campaign to end such flights from King County International Airport (Boeing Field) in Seattle. We collaborated with the University of Washington Center for Human Rights, which wrote a detailed report for us to use as part of the work. We also knew it was the appropriate political moment; the county agreed with us and stopped the flights from Seattle. Now as Donald Trump sues King County, ICE and Geo officials find themselves busing people to and from an airport in Yakima, either for deportation or for processing or incarceration at the NWDC.

We don’t compromise our abolitionist values when it comes to supporting detained people’s daily survival—we don’t pick and choose, we don’t ask about people’s past, and we don’t judge people. We only judge the system. We refuse to follow the easy path of prioritizing one community over the other; we refuse to foment the “good” versus “bad immigrant” rhetoric.

The immigration reform movement has proven unsuccessful because reforming the machine means buying into the lie that detention and deportation are OK. The system has been designed this way, as an extension of the mass prison system, and was created to control people of color—in this case, immigrants of color. From the very beginning, U.S. immigration laws were racialized to give preference to White Europeans. The history of immigration laws in the U.S. has been one of exclusion of those that are seen as not “worthy” of the U.S.

Our daily work is what Seattle University law professor Dean Spade calls “mutual aid,” and we must do this work with a long-term organizing strategy based on abolitionist values. Immigrants of color, low-income people, the proletariat—we have been ingrained with the idea that we must work hard, so hard we almost die every day, to earn a position in a place that rejects us as we are. We are told we must assimilate, leave our cultures behind, and be thankful for the crumbs we receive. It becomes imperative that we differentiate our work from charity and services that perpetuate the status quo and the oppression against us.

Mutual aid comes from a place that aims to change the entire system. We are changing the world we live in by choosing to defend and protect each other instead of using our misfortune to move some of us just a bit ahead of the rest. We organize because we know liberation can only come from us.

People have joked that the COVID quarantine has felt like being “imprisoned.” This pandemic is an opportunity to rethink as a society how we treat others. This is our opportunity to end the mass prison system in our country. Now is the time to push the conversations and creation of a society without cages that values human life. We don’t want saviors, we want accomplices; we don’t want charity, we want radical change. We want a world where no one benefits from other people’s suffering and misery. We choose this path, the difficult one, because it’s the one that leads to real change and liberation of our people.

Our Public Schools Are Still Separate and Unequal

Amid Coronavirus Outbreak, Social Distancing Doesn’t Have to Be Antisocial

Notre Dame and the Fight for Sacred Lands

Families Stay Connected When Separation Was the Only Choice