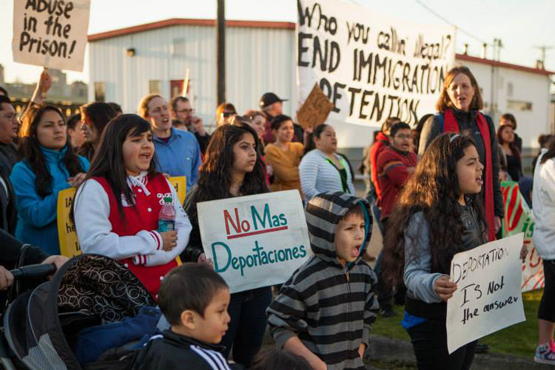 Supporters of people held at the Northwest Detention Center rally in Tacoma, Wash., on March 11, 2014. Photo by Alex Garland Photography.

A hunger strike in a Washington state detention facility draws attention to a facility where most U.S. laws don't apply.
By Ray Stoeve
3 MIN READ

Veronica Noriega stares through the chain-link fence at several buses with blacked-out windows parked outside the Northwest Detention Center in Tacoma, Wash. Her husband, Ramon Mendoza, is a detainee inside and helped to organize a hunger strike in protest of conditions at the facility. As a result, Veronica tells me, Ramon has been punished and isolated.

Chazaro sees the strikers as whistleblowers.

It’s March 11, four days after the strike began, and we’re outside the detention center with around 150 supporters. The crowd, among them many families with young children in tow, circles picket-style outside the gate, chanting “No estan solos!” (They are not alone!)

At this side of the facility, organizers say, the chants can be heard by those held inside.

The Northwest Detention Center is the only facility in Washington state that holds undocumented immigrants while they await adjudication of their case—a process that may result in asylum, deportation, or release.

The detainees are protesting their treatment and the conditions at the facility: a note, passed to one of their lawyers and published by Seattle’s alt-weekly The Stranger, asks for better food, lower prices at the center’s commissary where food and other items are sold, and higher pay for detainees who participate in the facility’s voluntary work program.

The detainees who work are paid just one dollar per day. According to the National Detention Standards—a set of operational guidelines drawn up by Immigration and Customs Enforcement and most recently updated in 2011—the work program lets detainees earn money and eases the negative impacts of detainment through “decreased idleness, improved morale, and fewer disciplinary incidents.”

The guidelines also point to another benefit: “Essential operations and services shall be enhanced through detainee productivity.”

There is just one domestic regulation that covers the treatment of immigrants in contract detention facilities.

“It’s a money-making operation,” says Angelica Chazaro, a visiting professor of law at the University of Washington who has been organizing with the local branch of the immigrant-rights campaign Not 1 More Deportation. The center in Tacoma is what’s known as a “contract detention facility”: the GEO Group, a private prison corporation that made $1.52 billion in revenue last year, was hired by ICE to run the facility.

According to Chazaro, the detainees are fed poor-quality food that doesn’t contain enough calories to live on, and as a result, many buy extra food from the commissary at high prices. In the end, she says, “all the money they make, they end up giving back to the facility.”

The current strike is not the first attempt to draw attention to problems with the Northwest Detention Center. In 2008, the Seattle University School of Law conducted an International Human Rights Clinic that assessed the facility and found that “conditions are substandard, and are not even in compliance with the National Detention Standards, much less international human rights law.”

Part of the problem, the authors of the study say, is that the National Detention Standards are “not legally binding and therefore are unenforceable.”

In fact, there is just one domestic regulation that covers the treatment of immigrants in contract detention facilities like the Northwest Detention Center. That’s in spite of several Supreme Court rulings that upheld the Constitutional protections of immigrants.

The exemption of detention centers from U.S. law is also noted in the National Detention Standards themselves, which state that “ICE/ERO affords working detainees basic Occupational Safety and Health Administration (OSHA) protections” even though it is “not legally required to do so.”

It is unclear how many out of the original 750 hunger strikers are still refusing to eat. Activists say as many as 12; ICE says the remaining strikers have all eaten . “The fact that it even happened is already a success,” Chazaro says.

She sees the strikers as whistleblowers drawing attention to an issue that, for most Americans, flies under the radar. “Part of how these facilities work is by isolation, and people not knowing it’s there or what happens inside,” she says.

But the strike has garnered local and national media attention, with solidarity demonstrations happening as far away as New York City. Ultimately, Chazaro hopes that ICE will investigate GEO Group for its alleged abuses—and, in turn, that the federal government will investigate both organizations.

Rights, Not Riots: What Seattle’s May Day Was Really All About