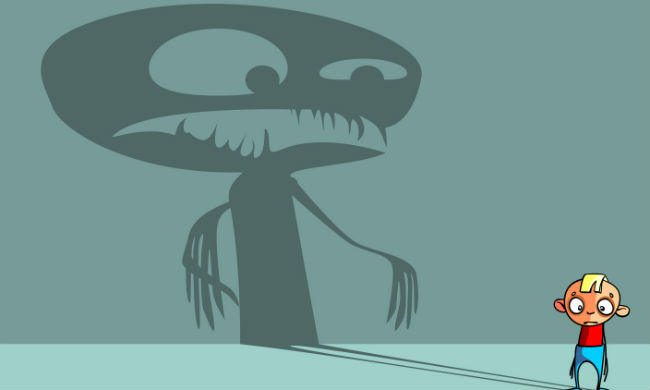 From strangers on the street to Muslim refugees—why we should embrace the humanity of people we may fear.
By Jeremy Adam Smith
5 MIN READ

I was riding the commuter train in September with my 11-year-old son. As we pulled into our station, a man followed us off the train and tried to throw me onto the tracks in front of an incoming train.

I was not seriously hurt, but my son was traumatized. In the weeks that followed, he had stomachaches and headaches. To this day, when he sees someone who seems homeless or schizophrenic—an everyday sight where we live—he gives them a wide berth, clings to me, hides.

This is what violence does: It burns fear into our brains, and the fear shapes our behavior.

I’ve thought about this a great deal in the wake of the terrorist attacks during the past few months in places like Paris, Beirut, San Bernardino, and Baghdad. The political responses to Paris and San Bernardino, in particular, have revealed a profound fissure in American life, one defined by fear.

Fear is always contagious, but what makes this fear especially resilient is the way it is becoming part of our online identities.

On one side of the divide stand 31 governors who immediately said they would refuse to accept refugees from Syria, fearing that some may be terrorists. One GOP candidate, Donald Trump, has even called for systematically spying on mosques and issuing special IDs to Muslims. On the other side stand leaders like President Obama and presidential candidate Bernie Sanders, who have both called for compassion for the refugees and alliances with Muslims.

This is not surprising. Fear of outsiders is a thread that runs through the history of this nation of immigrants, and it’s a fear we’ve seen growing since the destruction of the World Trade Center in 2001.

But what is new is the degree to which the fear is spreading over social media, with many people vicariously traumatized by pictures and video of the violence in Paris being shared and discussed, over and over again, on their Facebook walls. The terrorists themselves have fueled this fear by posting grisly, sharable videos and pictures online. Fear is always contagious, but what makes this fear especially resilient is the way it is becoming part of our online identities.

On a deep visceral level, images of violence in our Facebook feeds trigger raw physical fear for one’s own safety, which involves a fight-or-flight response. This I understand very well. When I was attacked, my body mobilized all its resources to survive, to which all other, more principled considerations took a back seat. If I could have shifted my weight to throw my attacker onto the tracks as he tried to push me off the platform, I would have done it, morality be damned.

But when we see images of political violence, we can add to this animal desire to live a special kind of fear—fear of out-groups, in this case Muslims of Middle Eastern origin. Just as my son’s fear is based in reality, so this fear is not without justification. Real people died in Paris and San Bernardino, killed by terrorists who called themselves (however wrongly) Muslims.

Indeed, fear exists for a very good evolutionary reason: It helps us to avoid threats. In the case of out-groups, we imagine that might entail the threat of disease or competition for resources, in addition to the kind of intergroup violence we’re seeing on social media and TV. No one in his or her right mind wants any of that coming home.

This is what violence does: It burns fear into our brains, and the fear shapes our behavior.

The trouble is that we have a natural tendency to exaggerate threats, a hard-wired psychological propensity called negativity bias. In experiments by researchers like Princeton’s Susan Fiske and NYU’s David Amodio, fear of out-groups specifically activates evolutionarily ancient brain areas like the amygdala. This is the most animal part of our brains, primarily concerned with our own selfish survival. This is the part of me that fought back on the train platform, the part that cared not a bit about right and wrong.

What happens when that amoral animal urge takes over groups? Susan Fiske once told me that human beings are extremely social animals who are very dependent on our group membership for food, shelter and security. As a result, “We care deeply about our in-groups. But the downside is that you’re then excluding people who are not in the in-group.”

This might have been necessary when our ancestors lived in small huddled bands of fewer than 300 people. But in a global civilization bound together by mass migration and worldwide communication networks, an unchecked in-group lens can distort reality, driving people apart who should be working together to reach common goals like stopping terrorism.

Research by C. Daryl Cameron and others finds that people will switch off their natural compassion and empathy when they feel threatened by the out-group. This is the mechanism that makes them seem less human—and permits us to refuse to provide help when it is needed.

Conservatives like the ones who are calling for mosques to be closed often do believe in compassion, charity, and generosity. In fact, their rates of charitable giving can be high relative to other groups. However, conservatives tend to conserve their compassion for in-groups, while liberals try to extend compassion and empathy to out-groups as well.

The political responses to Paris and San Bernardino…have revealed a profound fissure in American life, one defined by fear.

This brand of fear-based reasoning leads to huge distortions in public policy: The GOP mounted a campaign to bar 10,000 Syrian refugees from the United States because of the perceived terrorist threat. In a House vote last month, 242 Republicans voted to suspend the program allowing Syrian and Iraqi refugees into the United States; 47 Democrats joined them. At the same time, this GOP has defeated any efforts to control the flow of guns in the United States. As CNN reported in October, gun violence has killed more than 400,000 Americans since 2001, while terrorist attacks have killed just 3,380. This is a textbook example of how fear of out-groups can cause us to address the wrong problems.

Fear doesn’t just hurt the targets. Decades of research show that chronically feeling fear and stress is terrible for our physical and mental health. When media and politicians constantly fan fear, they may actually inflict profound harm on their audiences.

So how to overcome fear? The first step is to correctly identify it and to observe the fear without judgment. It’s perfectly normal to try to avoid threats. But human beings move toward threats every day, sometimes to defend the lives of other people. This is what we call courage—and courage very much depends on what you consider to be a worthy, meaningful goal.

Does courage consist of defying “political correctness” and attacking Muslims as a group? Or is it courageous to try to help refugees from war in the Middle East, even at a risk to ourselves? We’ll deem helping other people as brave if we are willing to see them as members of the human family. This is exactly what Obama tried to do in a speech at the G20 Summit last month.

“[Americans] don’t have religious tests to our compassion.”

“The people who are fleeing Syria are the most harmed by terrorism, they are the most vulnerable as a consequence of civil war and strife,” he said. “They are parents, they are children, they are orphans, and it is very important … that we do not close our hearts to these victims of such violence.”

He added: “When I hear folks say that, well, maybe we should just admit the Christians but not the Muslims, when I hear political leaders suggesting that there would be a religious test for which person who’s fleeing from a war-torn country is admitted … that’s shameful. That’s not American, it’s not who we are. We don’t have religious tests to our compassion.”

That is courage, in my view, and it echoes what I have tried to tell my son about the troubled street people we encounter every day: that they were children once, just like him, who were often afflicted by disease and abuse. I tell my son that most of them pose no danger to us.

In fact, they need our help—and sometimes, giving people help is the bravest thing you can do.

A different version of this piece originally appeared on the CNN opinion page.

Love in the Time of Mania: Six Ways Americans Are Defying Islamophobia