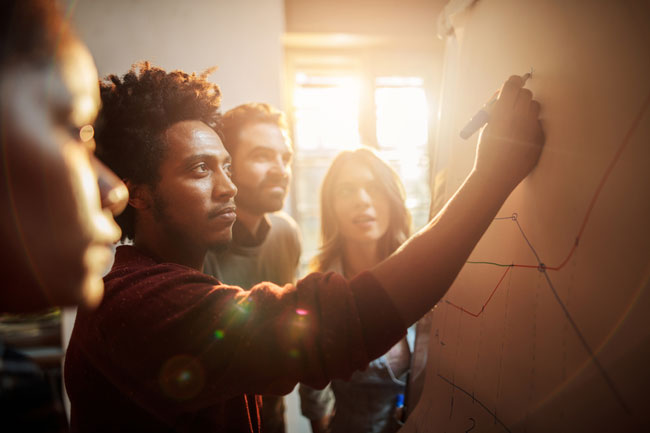 This article is the third part of a series of conversations with contributors to the demands of the Movement for Black Lives.

The amount of money spent on hiring sworn law enforcement officers to patrol public schools shot up nearly 40 percent between 1997 and 2009, despite the fact that crime in school has steadily declined for decades. A coalition of civil rights groups, including the NAACP, argues that this policy funnels kids of color into the school-to-prison pipeline.

But that debate doesn’t always make it into the process of setting the budget, which is where important decisions, like how much money goes to counselors in schools and how much goes to police, ultimately get made. Budgets are usually determined by elected officials and their advisers, while ordinary residents may only get a chance to comment at a public hearing.

Budgets are usually determined by elected officials and their advisors, while ordinary residents may only get a chance to comment.

Participatory budgeting offers an alternative: a democratic process where community members have a chance to directly decide how to spend portions of a public budget. The process of participatory budgeting is slowly catching on in the United States, and the Movement for Black Lives—a coalition of more than 50 racial justice organizations—saw it as so important that it’s listed among demands in a platform  released in August.

To write the participatory budgeting section of the platform, the movement recruited Catherine Albisa, executive director of the National Economics and Social Rights Initiative (NESRI). NESRI is a nonprofit organization that advocates for human rights and partners with community groups. Albisa, who is a mixed-race Cuban and identifies as Hispanic, says she was happy to help.

Here, she discusses connections between participatory budgeting and race, how doing budgets differently can transform our culture, and what a just and democratic budget process might look like.

This interview has been lightly edited.

Phelps: What are some of the ways current public budgeting and revenue processes have affected Black communities?

Albisa: You can look back several decades and you’ll notice that in our country we invest far more in harming people than in supporting people. So you have a lot more investment in things like separating families than providing housing that can keep them together; and it’s more expensive to do the former.

“We invest far more in harming people than in supporting people.”

And you could find a million examples like that. We have the privilege of anchoring something called the Dignity in Schools Campaign, and we’ve just made a call for getting all police out of schools, for example. The percentage of students who reported the presence of security guards and/or assigned police officers at school increased from 54 percent in 1999 to 70 percent in 2013. In the intervening years, what you’ve seen decline is counselors, social workers, guidance counselors—supportive people. Putting security in school costs money. Taking away supportive services is where we’ve shifted that money as a society.

Phelps: What are some examples of how existing participatory budgeting programs have been helpful to communities of color?

Albisa: I would start by saying that, unlike in some other countries, participatory budgeting in the U.S. is still at a very emergent state. But there are efforts. For example, parts of New York City will take a certain amount of discretionary funding and put it out to communities to decide what their priorities are. The advantage to that is twofold. First, you actually move the money to where people are experiencing need. And second, you build democracy; you build the sense of participation and agency in how we distribute and use our collective resources. It’s that faith in “we are the people and we run our government” that we need to rebuild.

Unlike in some other countries, participatory budgeting in the U.S. is still at a very emergent state.

Albisa: Federal funds that are released to states and municipalities could be released with a broad set of parameters that require a participatory-budgeting process. As a result, communities would become involved with federal funds.

Now, obviously you’re not going to have a country with more than 300 million people running a participatory-budgeting project. But what you can do is understand that the use of resources should be as democratic and participatory as possible. So if you are releasing funds to the state and local level, you should do so with priority given to projects and processes that involve the highest level of need.

Phelps: What are some of the challenges you anticipate facing in implementing participatory budgeting?

Albisa: One of the challenges is that we don’t have a practice. It’s literally building a new culture and practice around how we use our collective resources. And that’s something you have to be committed to developing over time.

The second is that we have to spend the time to say not only is the process participatory, but it’s intended to meet certain goals that reflect our values. That requires a certain amount of capacity building—a culture shift that’s worth our while, given how much social coherence has been lost in the last number of decades. What is the values framework, and can we build consensus around it?

The third challenge is that it’s not enough to create a participatory approach on the spending side of the budget process—it has to be connected to a revenue strategy that makes sense. Once the revenue has been raised, a number of assumptions and decisions have already been made. How do we step back to create a system where the revenue and the spending have a relationship to each other? What are our longer term goals and values, and how do we build a revenue system that can grow into a spending system that expresses those values?

How do we step back to create a system where the revenue and the spending have a relationship to each other?

Albisa: Right. It’s disconnected. It’s strange that we have our tax conversation weirdly separate from our spending conversation.

Phelps: The invest-divest section of the Movement for Black Lives platform would shift funds from policing and prisons to things like schools, health care, and employment programs. How would participatory budgeting help to bring about this change?

Albisa: It could help bring about these changes if you scale it up. Let’s say you scale it up to a full citywide budget and create a deeper understanding of how much you’re spending on things like criminalization vs. things like education, health care, and housing. And you allow for broader input on those big categories, vs. only within the small ones.

Once people understand that the reason that children are not getting technology or books in school is because we are putting up metal detectors in school, and we don’t need them, it’s going to cause them to reflect about our priorities.

Divest From Prisons, Invest in People—What Justice for Black Lives Really Looks Like

Meet the Citizens Who Helped Decide Their City’s Budget—and Got Better Buses, Benches, and Crosswalks