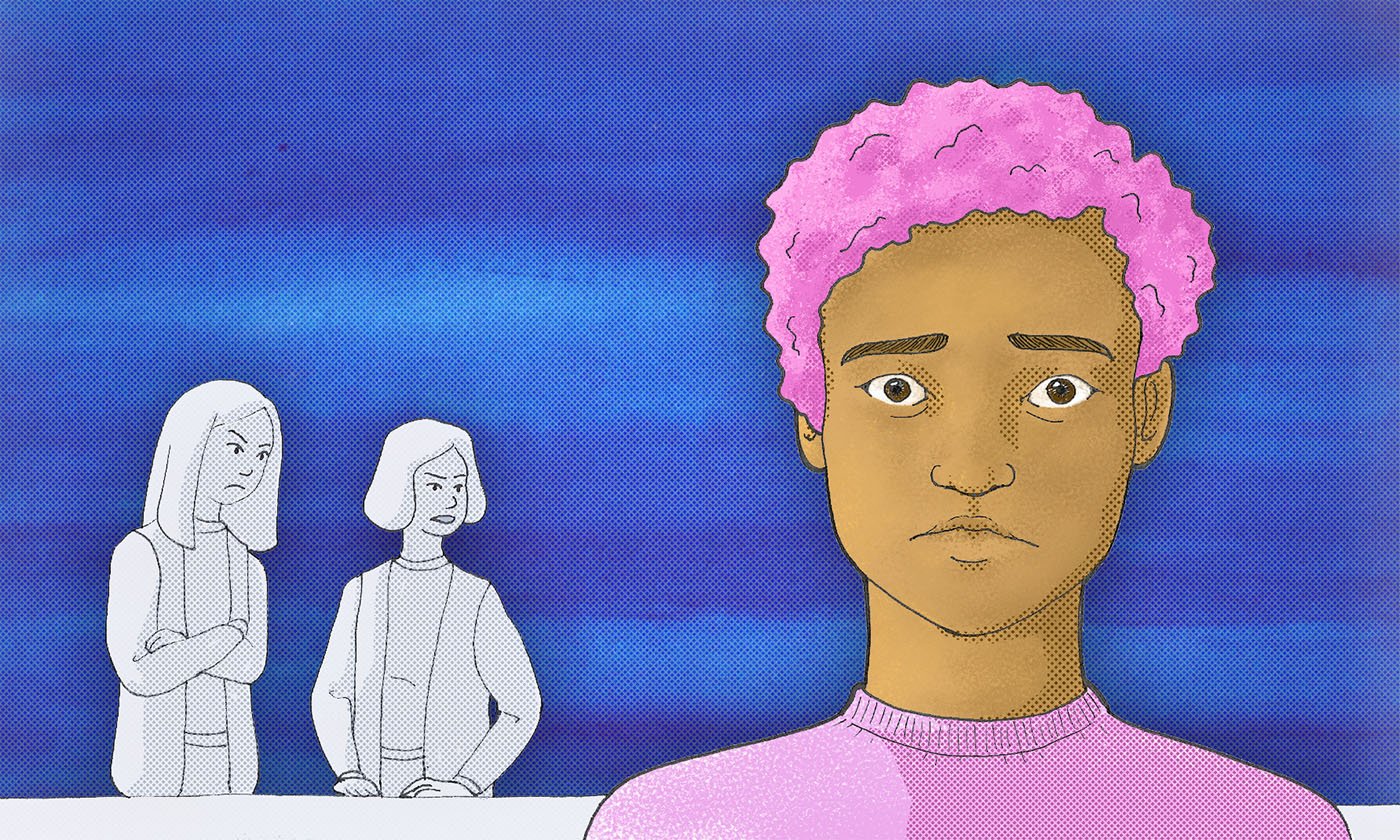 “Black people cannot and should not have to dismantle racism—or even confront racial profiling—alone.”

What happened to me goes much deeper than my own discomfort; profiling has been deadly for so many others.
By Bailey Williams
4 MIN READ

My weekday morning routine has become predictable: wake up, get dressed, ride the light rail to the Seattle ferry that will take me to beautiful Bainbridge Island, where I work at this magazine. While on the ferry, I have my usual breakfast sandwich from the galley.

But one particular morning in early February has left me troubled.

I had decided to forgo the breakfast sandwich for a bagel. Unsure of which kind I wanted, I walked around surveying the items, considering my choices. As I was inspecting a blueberry bagel, I caught a glimpse of two employees staring and pointing at me. The words “watch her” rolled off one of their lips quite casually.

“I can hear you,” I thought but felt too stunned to actually say. Also, it was apparent that she didn’t care whether or not I heard her.

I put the bagel down. Uncomfortable to purchase anything at that point, I started toward the exit. Their eyes made my skin crawl as I watched them watch me, with judgment, with every step I took. When I was out of sight I heard that same employee, laugh and say, “I have no tolerance for that.”

For what, exactly, she didn’t say. But it was clear to me they presumed I was trying to steal.

Oh, did I mention I’m Black?

It’s Black History Month, and instead of celebrating my Blackness, I have to defend it, not unlike my dad, who in the ’70s was bused to school in North Seattle, where the Black students were called names, spit on, and chased around the school.

“They didn’t like us out there, they didn’t want us,” he tells me.

It’s 40 years later, and although I’m not being spat upon, the profiling feels just as vile.

The bagel incident unfortunately wasn’t the first time I’ve been racially profiled, the national phenomenon of quick assumptions made based only on race. Sadly, I expect it won’t be the last. And I know that what happened to me goes much deeper than my own discomfort; profiling has been deadly for so many.

People still tend to think that just being a good person is enough to combat racism. But hear this: It’s not.

Last summer, Charleena Lyles, a pregnant mother, called to report a burglary at her Seattle apartment. With three of her four children inside the home, she was shot and killed by police officers for allegedly confronting them with a knife. Family members believed her race was a factor. They believed she was profiled.

The news of Lyles’ death shook me to my core. How could this happen in what I perceived as such a laid-back place like the Pacific Northwest? Call it naive, if you will. Or maybe it’s my young age—22—or that growing up in a mixed-race family I once bought into the post-racial myth.

But Seattle is full of racism as well as White progressives—many who consider themselves allies to people of color. Residents regularly hold marches in Westlake center to proclaim their wokeness. They put “Black Lives Matter” signs in their windows.

But if their allyship stops there, there will be no liberation for Black people.

Even in the age of Trumpism, people still tend to think that just being a good person is enough to combat racism. But hear this: It’s not. It takes recognizing the privilege you hold—whatever form it takes—and using it to eradicate centuries-old systems of oppression. Seek resources about what White allies can do for people of color and be proactive in your community.

Which brings me back to the racial profiling of a young Black woman trying to decide on a bagel while commuting to work. If you were there when it happened, would you have stepped up and said something?

You may ask why I didn’t stand up for myself. I’d like to blame it on the early hour and sleepiness, but that’s not the case. I turned around and left because I’ve become conditioned to hiding my anger, out of fear of being labeled the “angry Black woman.” But I have a right to be angry.

I did report it. I was given an apology and assurances about an investigation and racial sensitivity trainings. No one has followed up with me, and I haven’t stepped in the galley since.

Seattlites, predominantly White and good-hearted, we can do better.

Black people cannot and should not have to dismantle racism—or even confront racial profiling—alone.

My experience—although mild in comparison to those where people have been physically abused or killed—was a painful reminder that as a Black person, I’ll be judged by the color of my skin, and my character will continually be questioned, if not outright ignored. That is, until White people do more to interrupt racism in all the places it is. You don’t have to wait for another viral video or hashtag to take action—death and physical violence should not be the catalyst for acting.

Dear White People, Stop Making Racism All About You