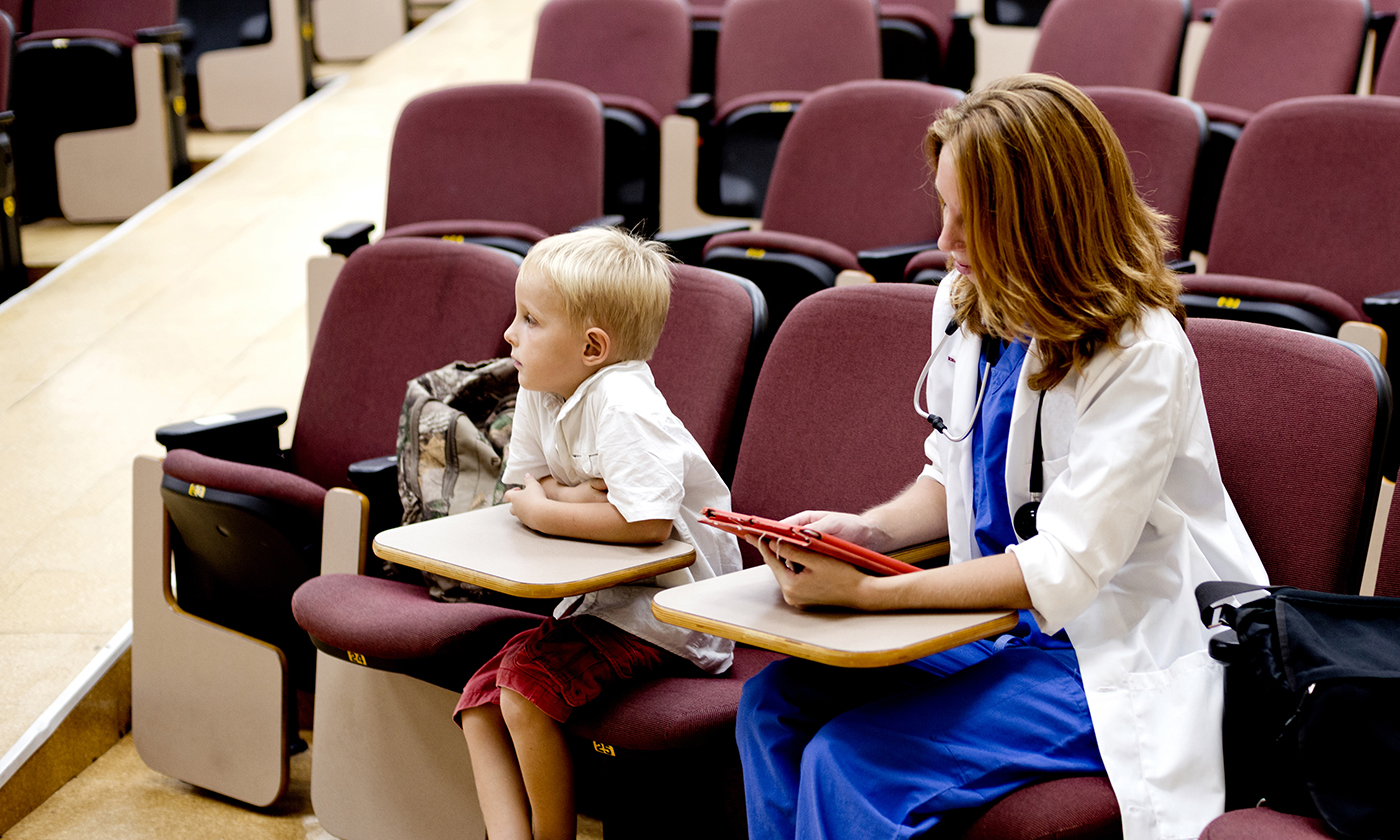 “Letting kids in class is a welcoming gesture that can set the stage for or accompany the more systemic and substantive supports that student parents need for success.”

Educators across the country are adopting a policy to allow children in classes, and allowing more student parents to stay in school.
By Lornet Turnbull
5 MIN READ

What are the options when child care suddenly falls through and your next class starts in 15 minutes?

Take your baby to class with you?

Kylee Barnes tried that a few years ago when her son was 2 and she was enrolled in community college in Albany, Ore. “We hadn’t been there three minutes when the professor said, ‘I’m sorry that’s not going to work out,” she says.

Now a graduate student in Oregon State University’s master’s program in applied anthropology, Barnes had the opposite experience when she returned to class in January, two weeks after giving birth to her second child. Not only was her newborn welcomed in all her classes, she also was able to breastfeed her child without having to miss any lessons.

Eight years ago, one of her professors, Melissa Cheyney, had created a written policy that permits student parents to bring their breastfeeding babies to class on an unlimited basis and their older children on those occasions when child care unexpectedly falls through. Cheyney’s policy has been adopted by educators on her campus and across the country, as well as in Canada.

“It’s not just a matter of letting me bring my child; my professors aren’t just dealing with it,” Barnes says. “They are encouraging it. They recognize it’s important for me to follow through with my passion, outside of being a mother.”

Student parents represent about one-quarter of all U.S. undergraduates—about half of them single parents, according to the Institute for Women’s Policy Research.

And while their ranks have been growing, the number of two- and four-year colleges with on-campus child care declined more than 5 percent between 2005 and 2015, according to the research institute. On campuses where child care does exist, students and educators say it’s seldom adequate—often cost-prohibitive, with long wait lists.

At the same time, campuswide policies that allow students to bring their children to class in a pinch are practically unheard of. Far more common are arrangements where professors use their own discretion and build permission into their syllabi or make case-by-case allowances for students.

A medical anthropologist and a licensed midwife, Cheyney says she wrote the policy around a time OSU was examining overall student retention rates across campus. At the same time, student parents, those of color in particular, she explains, were struggling with degree completion.

“I started thinking, ‘What is the big problem with having children on campus?’ I knew what it was, everybody was worried about them being disruptive. But it seemed that was just a problem to be solved.”

“While students might occasionally want to bring a child to class, in itself it doesn’t constitute a solution.”

Without seeking university permission, Cheyney created a policy, included it in her syllabus and began telling her students about it.

“The students we don’t want leaving university are the very students, who as parents, are going to have a lot of economic needs,” she says. “If they can complete their degree, their earning potential is going to rise,” she said.

A 2016 analysis by Women’s Policy Research found that single-mother poverty rates declined with each additional level of education. Some 13 percent of single mothers with a bachelor’s degree were living in poverty, compared to 41 percent with only a high school diploma.

“Letting kids in class is a welcoming gesture that can set the stage for or accompany the more systemic and substantive supports that student parents need for success, such as child care or lactation rooms, financial support or housing,” Barbara Gault, executive director for the research institute, says. “While students might occasionally want to bring a child to class, in itself it doesn’t constitute a solution—but it sends an important message.”

Cheyney says she’s had children and babies in every class—graduate-level and undergrad. There’s the occasional dad, but it’s usually mothers. She reserves a seat near the door for parents so they can slip out easily if they need to.

“A lot of my colleagues have asked, ‘Aren’t you afraid students will use this as an excuse not to get child care? “I say, ‘Are you kidding me? No student wants to bring her child to class,’” she says. “They are mortified the whole time that the kid’s going to make a sound. And kids get it that this is not a place for them to be disruptive.”

Not only has she never had a student complain, Cheyney doesn’t even know if the university is aware of her policy because no one has ever said anything to her about it.

“Students, especially mothers, should never have to choose between getting an education and caring for her child.”

She has fielded emails from educators across the country and in Canada who have copied the policy into their own syllabi.

Shiri Pasternak, a professor of criminology at Ryerson University in Toronto, is one of them.

Cheyney’s policy, which Pasternak adopted two years ago, had triggered her own earlier experience as a new mother completing her doctorate degree at University of Toronto. To break the isolation, she said, she’d sometimes attend lectures relevant to her research and take her baby with her, remaining in the back for an easy escape.

While some people showed kindness, others “were clearly annoyed,” she said. “They made me feel that somehow having a child was antithetical to a learning space and that space wasn’t for me.”

Students, especially mothers, should never have to choose between getting an education and caring for her child, she said.

“Having children is so difficult when you’re a student, and especially if you’re a woman, because most of primary care can fall on you,” she said. “This policy is an important signal to students that says having children is not outside the realm of possibility for people interested in getting a higher education,” Pasternak said.

In a conversation thread on Facebook, women raved about the policies, with some saying they planned to adopt them for their own syllabi.

Some admitted the language brought them to tears. One woman wrote: “Isn’t this what teaching and meeting the needs of students is all about?”

Another said: “The amount of money that goes into tuition and materials, there’s no excuse—whatsoever—to not have day care faculties on campus.”

But not everyone was onboard. One person said she would not want a kid in her class. “Like one peep, and I’m distracted … toys banging… just no.”

Susan Warfield, program director of the Student Parent Help Center at University of Minnesota-Twin Cities, says colleges became more restrictive about having children on campus after the Jerry Sandusky sex abuse scandal at Penn State University broke in 2011: “Some campuses even banned children … completely as an extreme form of protecting them, and it made colleges focus on children as legal liabilities.”

Not unlike having children in the workplace, Warfield says, no one-size-fits-all policy  can be applied to kids on campus and may always have to be done case by case, depending on the type and size of the class. Do you have 30 students or 300 in that class? What about children in labs?

Warfield says, “What I think is needed are overarching family-friendly campus policies that say children are part of the community, parents will be reasonably accommodated whether they are students or employees and that the institution expects staff and faculty to support a welcoming environment to families across campus.”

Barnes admits that without Cheyney’s policy she might have been forced to make different choices around child care. She probably would have had to take a leave of absence, not the best option for a graduate teaching assistant on a stipend.

The child care facilities on her campus have long wait lists and are costly even if she could get in.

She recalls apologizing to Cheyney once when her toddler son had been slightly disruptive at an off-site event she’d brought him to. “She told me, ‘Children need to be in places where important things are happening.’ All these years later, that has stayed with me.”

Why Childbirth and Abortion Are Not Separate Issues

Reproductive Freedom Depends on Where You Live. How Does Your City Rank?

What the Abortion Bans Have to do With Poverty and Race