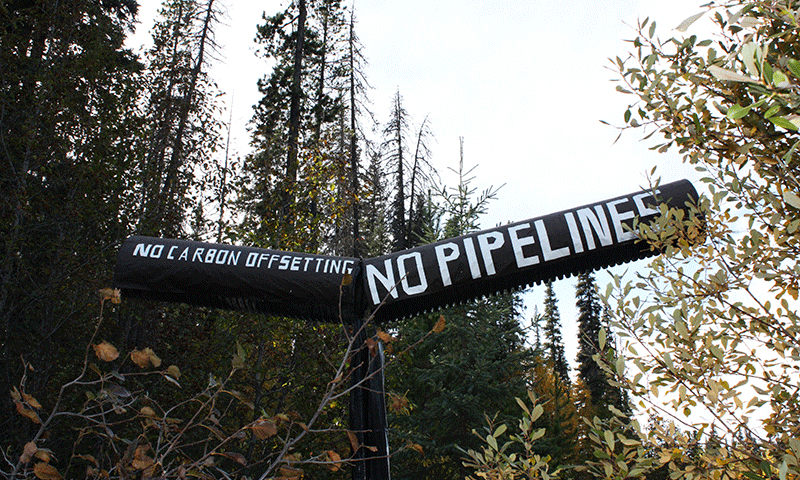 For nearly 10 years, the Unistoten camp has occupied hereditary lands directly in the path of the pipeline.

Since 2010, the Unist’ot’en have fought the transit of fossil fuels through their hereditary lands. In the last few days, police finally moved in. Here’s how we got to this point.
By Zoë Ducklow
6 MIN READ

Where is the Unist’ot’en blockade, and what’s it about?

The gated checkpoint is on a forest service road about 120 kilometers southwest of Smithers in Unist’ot’en territory at the Morice River Bridge. Two natural-gas pipelines are to cross the bridge to serve LNG terminals in Kitimat. Unist’ot’en is a clan within the Wet’suwet’en Nation.

Wet’suwet’en hereditary chiefs claim title to the land, based on their pre-Confederation occupation and the fact that they’ve never signed a treaty. Their claim has not been proven in court.

The gated checkpoint is meant to control access to their traditional territory. A protocol for entry, based on principles of free, prior, and informed consent, is publicly available. While the first checkpoint was built by the Unist’ot’en clan, all the hereditary chiefs of the Wet’suwet’en Nation have affirmed that their consent is required prior to any development.

TransCanada’s Coastal GasLink pipeline will carry natural gas from Dawson Creek to Kitimat. It’s in the early construction phase. The proposed Pacific Trail pipeline, run by Chevron, proposes to transport natural gas from Summit Lake to Kitimat for conversion to LNG. This pipeline received an environmental assessment certificate, but the investment agreement has yet to be finalized. (The Northern Gateway pipeline, run by Enbridge, was also planned to go through the region, but was scrapped in 2016.)

Hasn’t the Unist’ot’en camp been around for years now? Why is it suddenly the center of attention?

Yes, the checkpoint was established on April 1, 2009. Since then, annual work camps have added a cabin, healing lodge, pit house, and bunkhouse for visitors. The camp is used year-round for healing retreats, culture camps, and living.

Coastal GasLink applied for an injunction in November 2018 because workers have been unable to cross the checkpoint to start clearing the pipeline route. The B.C. Supreme Court issued a temporary injunction in December, prohibiting anyone from blocking the bridge. The court also ordered the checkpoint to be dismantled within 72 hours.

A few photos from #Gidumten a few hours ago as RCMP moved in to enforce the injunction for Coastal GasLink #bcpoli #Wetsuweten pic.twitter.com/DCa3ZpYP4l

It’s in the news now because not only did Unist’ot’en camp refuse to take down the checkpoint, but their neighboring clan, Gidimt’en, established a second checkpoint. (The injunction was expanded on Jan. 4 to include that checkpoint.)

Throngs of people are traveling to join the camp in solidarity, and on Monday the Royal Canadian Mounted Police mobilized to enforce the injunction. Rallies are planned in over 30 cities around the world today.

Who called in the RCMP to raid the camp?

The RCMP’s job is to enforce the injunction on behalf of the court, and it’s not necessarily raiding the camp. On Monday, tactical teams began to dismantle the Gidimt’en checkpoint. Last evening, RCMP reported 14 arrests of people who refused to comply with the court order. The individuals were taken to Houston, B.C.

As of Monday night the RCMP had breached the Gidimt’en blockade but had not reached the Unist’ot’en blockade or camp. The Unist’ot’en camp beside that blockade, which has been in operation for nearly 10 years, is not part of the order, and because it’s not in the way of construction access, can likely remain as is.

Today was a difficult day to witness. RCMP enforced an injunction to force them to give access to the Coastal GasLink pipeline that would deliver natural gas to the $40 bill, under construction expansion terminal in Kitimat. #wetsuweten #aboriginaltitle #pipeline pic.twitter.com/JC6Ikr3O2F

How is the B.C. government, which supports the LNG export terminal, reacting to the raid?

The government has not made an official statement, but Stikine MLA Doug Donaldson, minister of forests, lands, natural resource operations, and rural development, visited the Gidimt’en checkpoint Sunday. He arrived with a box of food in hand as a show of support and was admitted into the camp after going through the entry protocol with a Gidimt’en member.

Premier John Horgan is an enthusiastic supporter of the Kitimat LNG project. He has also vowed to implement the U.N. Declaration on the Rights of Indigenous Peoples, which includes such principles as free, prior, and informed consent for activities on the territories of Indigenous people, the right not to be forcibly removed from traditional land, and the right to maintain connection to the land.

Aren’t the Wet’suwet’en among the First Nations who have approved the pipeline?

Who are the Wet’suwet’en Nation?

The Unist’ot’en clan is one of five clans that make up the Wet’suwet’en Nation. The camp is on their territory, and the injunction was initially filed against them, but five hereditary chiefs came to the checkpoint Monday to show their support and solidarity for resisting the pipeline. Wet’suwet’en traditional territory spans 22,000 square kilometers in northwest B.C. west of Smithers.

How are First Nations leaders in B.C. and Canada reacting?

Grand Chief Stewart Phillip of the Union of B.C. Indian Chiefs released a statement condemning the RCMP’s tactics of “intimidation, harassment and ongoing threats of forceful intervention and removal of the Wet’suwet’en land defenders from Wet’suwet’en unceded territory.”

What do the people at the checkpoint facing arrest say?

Freda Huson is one of the people named in the injunction. She works at the healing lodge at the Unist’ot’en camp.

“We didn’t agree with the injunction because they didn’t hear our side, and we have too much to lose. We don’t want them to say that we can be in a reservation and stay in my buildings here, but they can destroy the rest of the territory,” Huson said in a Facebook video on Monday.

“I’m here now because this is my home, this is where I live. This is an unjust system that we live in. My people have been pushed aside, pushed aside for hundreds of years. And it hasn’t stopped, it’s still happening right now. My people live off these lands.

“The gate is for our protection. We had racists coming in and shooting rifles, ramming my gate with vehicles, and using explosives to blow up my gate. And the police in Houston know, and they did nothing about it. They said not enough evidence.

“And now the state. I blame Justin Trudeau, John Horgan. If you guys are listening to this, you guys are behind this project. You guys are behind approving these police to come in and treat me like a criminal. And all I am doing is living on my lands that my clan has title and rights to. You say reconciliation? This is not reconciliation. You’re treating my chiefs and us as criminals. We’re not criminals. This is our land.”

When people say this could be “another Gustafsen Lake,” what do they mean?

The Gustafsen Lake standoff happened in the summer of 1995 in the Secwepemec (Shuswap) region. A Sundance ceremony, which takes a month to complete, was being held when relations with a rancher who claimed ranging rights over the land turned hostile.

The standoff began Aug. 18 and ended Sept. 17. More than 400 RCMP officers, supported by military advisers, blockaded the camp. Landmines were used to block access, police were heavily armed, and helicopters and airplanes were used for surveillance. The police operation cost more than $4.5 million.

No one died in the standoff, although tens of thousands of shots were fired and two people were wounded.

The Sundancers surrendered, and 18 people were charged with trespassing. RCMP tactics—including a smear campaign to spread misinformation about the Sundancers—were criticized during the court proceedings. Fifteen people were found guilty, mainly of tresspass, and jailed.

The fear in this case is that the RCMP will employ similar tactics. Officers have set up an exclusion zone around the area, as they did during Gustafsen Lake.

This article was originally published by The Tyee. It has been published here with permission.

Big Oil and Gas Want Them Out, But One Small Clan Is Standing Up to Pipeline Expansion

Special Report: The First Nations Blockade That Could Shut Down the Tar Sands