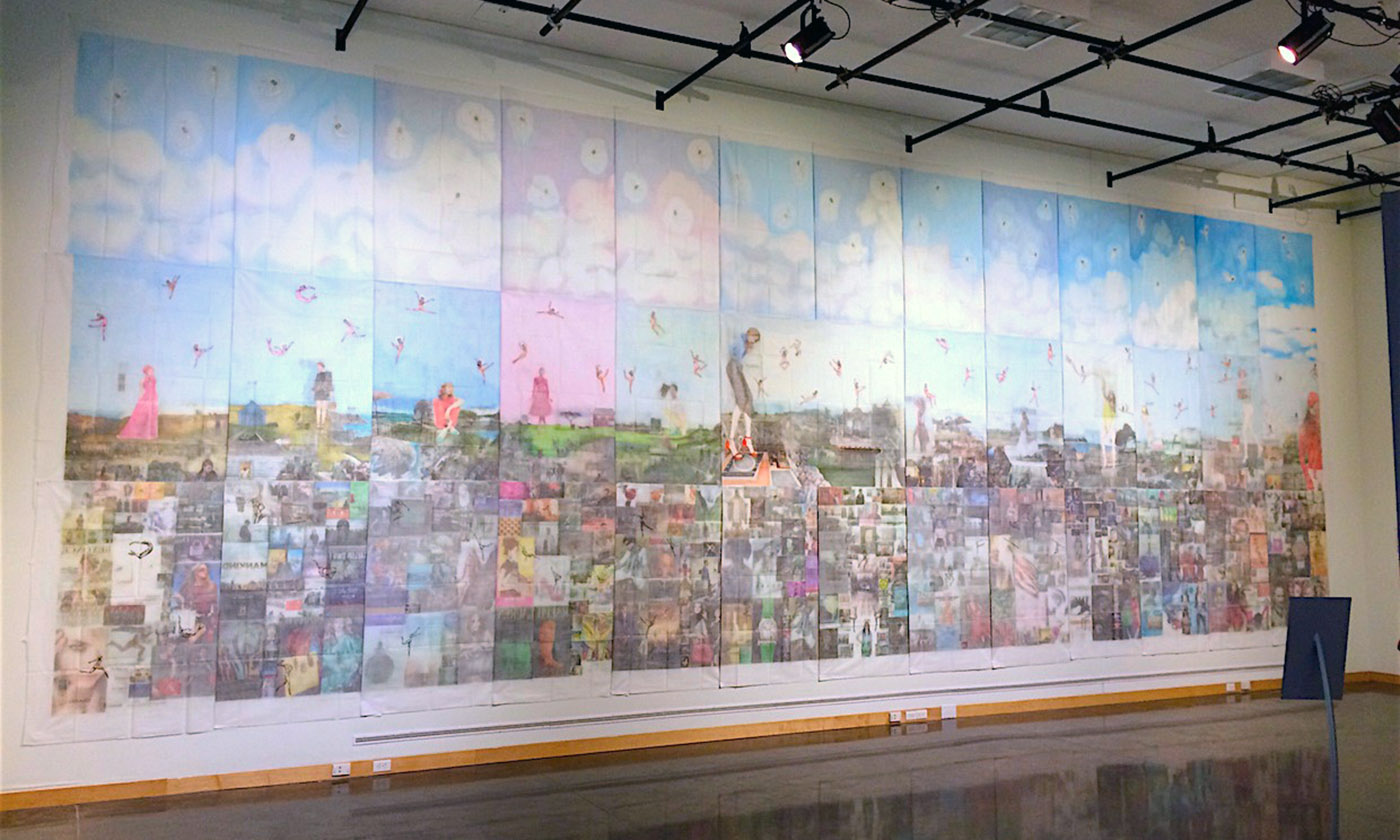 Apokaluptein by artist Jesse Krimes who created the work while serving a prison sentence. Krimes smuggled the contraband works out of the Federal Bureau of Prisons via the United States Postal Service, piece by piece, over a period of three years, never seeing the entire work until his release.

Photo from The O.G. Experience

One piece of art is a tapestry of 39 bedsheets that the artist smuggled from prison over the course of three years.
By Allen Arthur
4 MIN READ

The smell of cow’s blood made Russell Craig light-headed. He’d bought a few gallons of it from a butcher shop. Now here he was in a studio, painting it onto canvas, creating shapes that mimicked Rorschach tests he had taken as a child.

“I was being really, like, stressed out. [The blood] was affecting me,” Craig says. “Then some people was advising me to not work in this medium. Maybe I should be careful when I don’t really know what I’m getting into in the spiritual aspect and all sorts of levels I didn’t really understand.”

The piece should conjure up trauma, he thought, so he ignored the warnings. For Craig, the chance to shake up people’s thinking was worth it.

In the country with the world’s highest incarceration rate, Krimes and Craig hope the work on display helps people understand the individual and societal impact of incarceration, as well as the journey of reintegration.

“It seems like to me, in society a lot of people are becoming numb to these issues,” Craig says.

The show is a companion to a new HBO film, O.G., in which Jeffrey Wright plays a man about to return home after 24 years in a maximum-security prison, only to have his life complicated by the arrival of young man who mirrors his younger self.

Craig and Krimes want people to “wake up” to larger forces such as racism and poverty shepherding millions into prisons, the media sensationalizing of prison and the true struggles when returning home. By creating new artistic narratives, they say they want their art—and all the art of the O.G. Experience—to take people on a journey necessary to bring about radical, societal change.

Krimes’ stereotypes about the legal system crumbled during five years in federal prison on drug charges.

“I was born and raised in Lancaster, Pennsylvania, which is a predominantly white, conservative, rural community,” Krimes says. “My conceptions of what it means to go to prison or be someone who goes to prison were dictated, in a way, by things that I would see on TV. When I went into prison, those views were radically challenged.”

While incarcerated, Krimes says, he looked inward to examine his choices, but also outward at the societal conditions that lead to and prop up incarceration. With titles such as Coercion, Purgatory, and Entropy Rings, his art vividly explores how those conditions affect people.

Apokaluptein, perhaps his most sprawling work, is a 15-foot-by-40-foot tapestry of 39 prison bedsheets. Krimes had transferred New York Times images onto the sheets using hair gel and plastic spoons, then smuggled them out of the prison, piece by piece, over three years. He only saw the completed work once he returned home.

“My primary thing that I could push back against is this idea that some people are good and some people are bad,” he says. “Particularly here in the States, we have a very binary way of thinking. So if someone did something bad, made a bad decision, or did something that harmed others, that one singular decision ends up being how we see that person forever. And that’s not reality.”

Craig grew from what he calls a “petty drug dealer” to an artist creating work around systems of violence. He explained that the art he makes—which also focuses on victims of police violence—refutes how society sees people like him.

“The way it started was, Kendrick Lamar had this song ‘DNA’ that was out,” Craig recalls. “The idea came like, ‘Yo, I should make some art with some blood.’ Some people look down upon who I am, being a Black man, being a formerly incarcerated individual. But I know it’s greatness inside my DNA.”

Craig says he, too, never understood the systems at work in his life. As a child, he lived in foster homes. Then, he bounced in and out of jails and prisons for years. During his last stint, he says he had “an epiphany,” realizing he needed to break the cycle of his lifestyle.

He began taking art seriously—at great risk. Loading up on art books from the library, he started selling portraits for $40.

“I developed a business, which was forbidden to have a business inside, but I wasn’t getting [problems] from the C.O.s because I think even they appreciated the art.”

Self-Portrait by Russell Craig was painted on paperwork that the artist accumulated during the seven years he spent making his way through Pennsylvanias criminal justice system. It includes sentencing paperwork for a drug conviction legal documents from his parole hearing and documentation of his transition into a Philadelphia halfway house. Photo from The O.G. Experience.

Eventually, he attended a meeting in prison with Mural Arts Philadelphia, a public art program, using a pass that granted him permission to go only to the library. Had he been caught in the wrong place, he would likely have faced solitary confinement. He took the risk, he says, because previous releases taught him the importance of preparing while you’re inside or risk going back.

Both men say that reintegration after prison is one of the most misunderstood aspects of incarceration. Far from being the end, returning home introduces a host of new barriers to everyday things—from finding stable employment and housing to reconnecting with family.

“The biggest challenge of coming home is you’re removed from society for such a long period of time that when you come home everything’s changed,” Krimes says. “You’re just trying to do some very basic day-to-day things to catch up. It always feels like you have to catch up.”

Krimes found O.G.’s portrayal of the prison experience to be sensitive and thoughtful, something missing from most mainstream representations.

“It didn’t focus on the sensational elements of violence and all those things, which happen, but they’re few and far between. Mostly it’s just boring day-to-day bullshit and mistreatment by staff.”

By clearing up misconceptions of incarcerated and formerly incarcerated people, Craig and Krimes hope people will turn their attention toward the societal conditions that feed incarceration.

“Growing up, I wasn’t taught to be a real critical thinker,” Krimes says. “I just feel like as a country, we don’t do a great job of teaching our citizens to be critical thinkers, to understand bigger systematic structures that have very real world impacts.”

A Way to Talk About Race, 6 Words at a Time