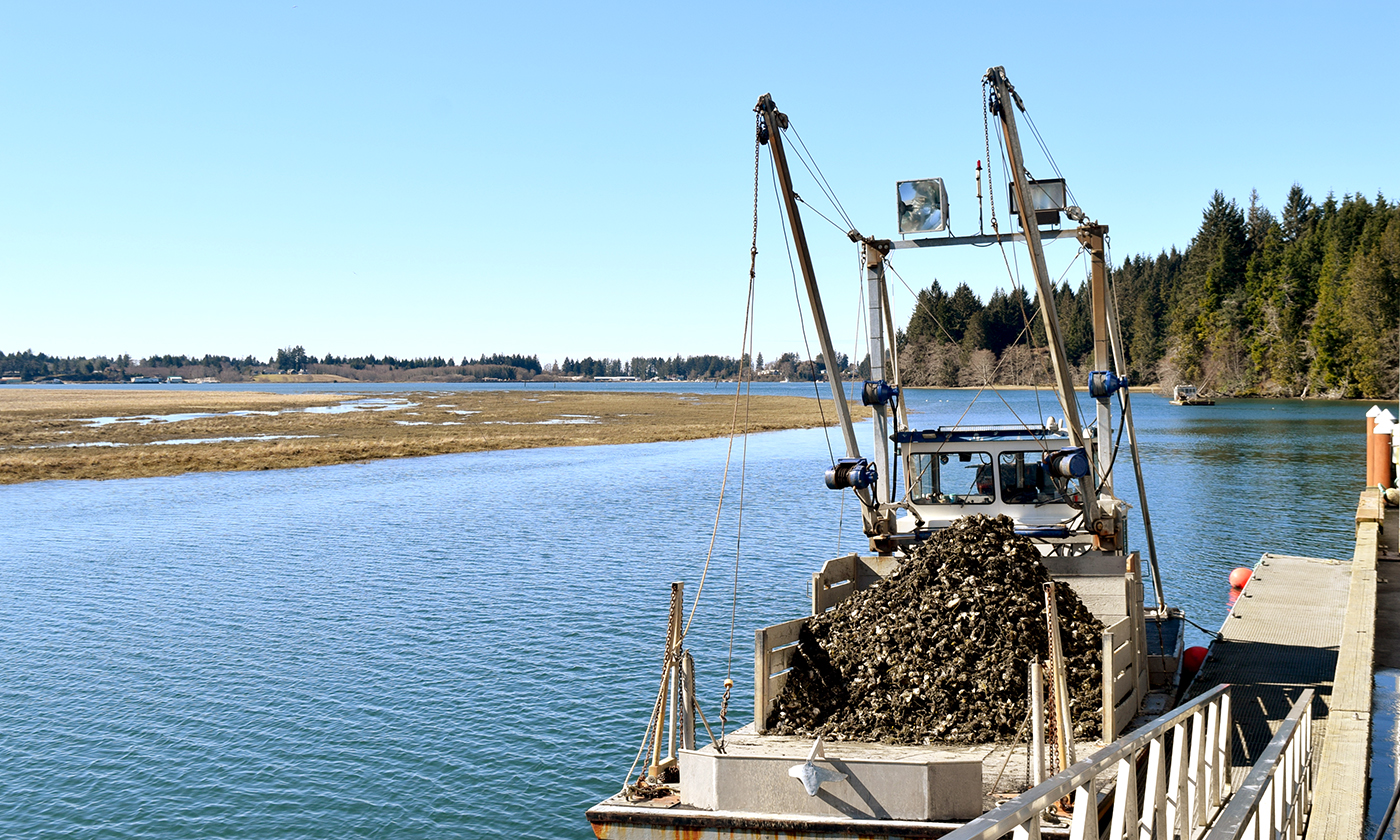 Many employers, like the owner of this oyster barge belonging to Goose Point Oysters, near South Bend, Washington, have come to depend on immigrant workers.

This rural community might have agreed with Trump’s anti-immigration policies on paper. But it could not abide their neighbors being taken away.
By Dori Cahn
6 MIN READ

Pacific County, in rural southwest Washington state, has the uncommon beauty of expansive coastal beaches and the spreading arms of Willapa Bay. Tidal sloughs, free-flowing rivers, and abundant wildlife provide a rich environment for shellfish beds and cranberry bogs, making Willapa Bay the largest producer of farmed shellfish in the U.S. The bay is nearly separated from the Pacific Ocean by the Long Beach peninsula, home to a thriving beachfront tourist economy. These industries are vital to the county’s economic health.

And they have all also grown to depend on immigrant workers.

The first wave, originally from Mexico, came in the late 1980s, many gaining legal status under Reagan’s 1986 amnesty program. Their numbers grew over the next two decades, stabilizing about 10 years ago. “There was a real thriving, really dynamic and unique immigrant community here,” says Erin Glenn, former director of Migrant/Bilingual programs for the Ocean Beach school district.

The small towns along the coast and Willapa Bay easily absorbed the families into their local communities. And workers became skilled at setting out lines of oyster seedlings, navigating tides to dredge shellfish beds and mastering the delicate work of flooding cranberry bogs for harvest. Local employers relied on their experience.

Then, about two years ago, they began to disappear.

Immigrants were being picked up at work, or U.S. Immigration and Customs Enforcement officers were showing up at their homes, as the Trump administration stepped up immigration enforcement. Fear spread among local immigrants who had been made to feel safe and welcomed.

Pacific County had just voted for a Republican presidential candidate—one who was elected on a platform of anti-immigrant rhetoric—for the first time since it went for Dwight D. Eisenhower more than 60 years ago.

And if locals were hoping that Trump would create jobs to offset the region’s declining timber industry, they instead got immigration policies that eroded the industries that are still thriving.

Oyster shell recycling process at Taylor Farms in Bay Center. Pacific County is one of the largest producers of farmed shellfish in the U.S. Photo by Stephanie Serrano.

Ann Reeves, a local activist who organized a workshop to help employers learn how to protect their workforce in the face of ICE raids, recalls one shellfish company owner who began losing thousands of dollars a day when ICE arrested three of his best employees. Another was considering closing down because he, too, had lost too many workers, she says.

Reeves got involved in the issue when she was organizing an ACLU People Power group early in 2017, and learned that Glenn was looking for others to help families disrupted by arrests.

A fourth-generation resident of the Long Beach peninsula, whose family owns a historic cranberry farm there, Glenn had watched the community grow and change over the years. She personally knew 30 people at that point who had been arrested by ICE and was doing her best to help them.

Together the women created a rough framework to help support those facing deportation, providing transportation and accompaniment to court hearings and letters of support for their cases. Their work attracted people from surrounding communities who were looking for ways to fight back against the administration’s hateful policies.

And it got a boost when a series of stories in the local newspaper showed that people being arrested and deported had strong ties to the community. They were neighbors, not the ugly labels the president had used.

Together the women created a rough framework to help support those facing deportation, providing transportation and accompaniment to court hearings.

The organization evolved into a formal nonprofit now called Pacific County Immigrant Support. They know of nearly 100 arrests but acknowledge that there could be many more they have not heard about.

Some volunteers work actively with affected families, or put on workshops to help community members and employers understand their rights in such circumstances. Others help raise funds, lobby legislators, organize public protests, or buy Christmas presents for children whose parents have been detained or deported. Immigrant support members have also met with local law enforcement to discourage their cooperation with ICE, an ongoing problem that has broken the community’s trust.

Sandy Nielson, who volunteers with the immigrant support group as a family advocate, began to learn more about the community after befriending her neighbors, Miguel and Maria and their three children. The retired teacher became part of their wide circle of friends and family who gathered each weekend for volleyball games at Miguel and Maria’s home.

In fact, they had been there, in the kitchen, joking about how Miguel could “get his papers” a few weeks before ICE came knocking at the couple’s door in spring 2017.

“It was a Thursday morning, there were a couple of men standing there. They asked for a name that neither Maria nor Miguel recognized,” Nielson says. They took Miguel instead.

Miguel had been a crew chief at a seafood company, and his detention and eventual deportation left his family struggling. The group raises money to help families like Miguel’s when a breadwinner is taken. “In the early stages we’d just pass a hat at meetings,” Reeves says. “People really care about their neighbors and want to help. That’s what gives me hope.”

As the support group’s main organizer, Stephanie Serrano does everything from coordinating with local allies and organizing fundraisers, to meeting with families soon after someone has been arrested to help them plan their next steps.

Recently, she helped Claudia’s husband find a lawyer after he and two co-workers were arrested as they left work at a shellfish cannery in September 2018. Then she went with a local council member into the cannery’s office to ask why the company hadn’t sent anyone to the group’s workshop on employers’ rights. They got no response.

Because her family’s situation is precarious, Claudia did not want her real name used in this article. She had crossed the border twice. The first time she nearly died during three days walking in the desert; the second time, traveling with her husband, they were robbed at gunpoint by accomplices of the coyote guiding them.

Several of the immigrants helped by Pacific County Immigrant Support are now volunteering as interpreters and serving in other support roles.

They’d come from Michoacán, an area rife with drug cartels and violence. A few years ago, her husband’s sister was taken from the family’s house there. The family was warned not to look for her, and they never saw her again. “In Mexico, nobody sees anything,” Claudia said. “They come to your house and take your kids or take you; next day, nobody knows anything,” she says. “She left two kids; my mother-in-law is taking care of them.”

Claudia’s husband hopes to get his deportation order waived on the basis of their three U.S.-born children. She doesn’t know what she would do if he is deported. “We are a really close family,” she said. “It will be a really hard decision. We have to be together.”

Her husband had admitted to ICE when he was arrested that he wasn’t authorized to work in the U.S. He didn’t know he had the right not to answer their questions. “Your silence is your best protection,” Serrano tells her.

Several of the immigrants helped by the support group are now volunteering as interpreters and serving in other support roles—building bridges between the organization and the Latino community.

Cranberry bog at Cranguyma Farms on the Long Beach Peninsula in Pacific County. The farm was established in 1940 by Erin Glenns great-grandfather. Photo by Dori Cahn.

One of them is Mario Rodriguez, an educator who worked with Glenn for 12 years in the school district’s Migrant/Bilingual program. He has been active in the community since he came to the peninsula, volunteering to interpret in hospitals and helping at community events. Everybody knew him.

That’s why his arrest in July 2017 was so shocking. Rodriguez had stopped at the post office to check for a package and was getting out of his truck when ICE officers approached him. His arrest stunned even supporters of Trump’s harsh anti-immigrant policies. “The outrage in this community when they took Mario was unbelievable,” Serrano says. “Everybody was like, ‘Mario? Of all the people! No way!’”

Rodriguez filed for asylum and his case is moving through the immigration system. “At first I said, I will fight until the last minute,” Rodriguez says. “But now that it’s a long time, it’s a nightmare.”

He’s channeling his energy into volunteering with the immigrant support group to help families going through similar experiences with ICE, and interpreting for the group’s advocates and lawyers. Grateful for all the support he has received from them, he recently joined the group’s board.

This Castle in the Desert Provides Respite to Asylum-Seekers

Grandmothers Bring Food and Comfort to Asylum-Seekers at Bus Stations