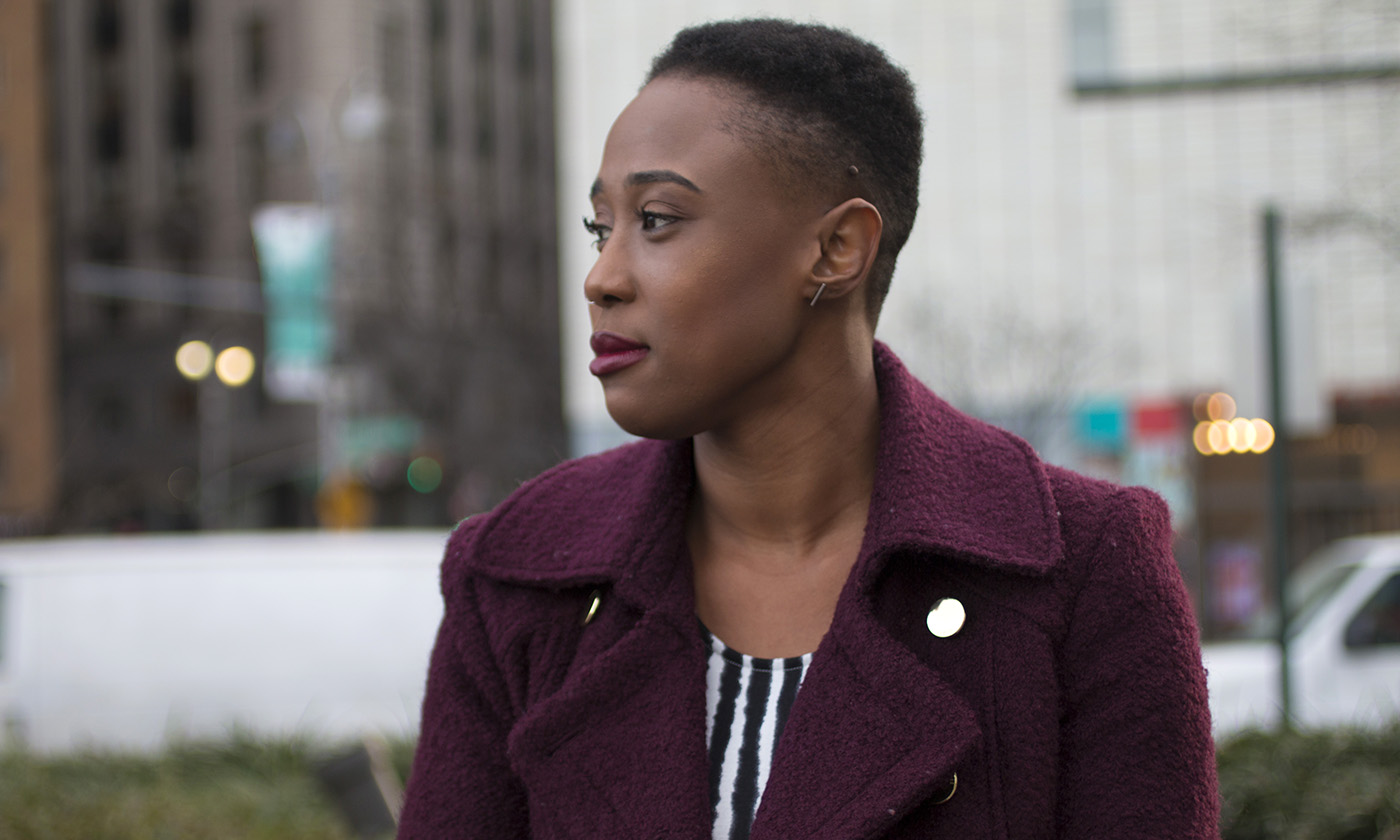 Deonna Anderson started her journey as a Black donor in 2016.

For Black people, whose donor pool is exceptionally small, addressing racism in the medical profession is crucial to finding solutions.
By Deonna Anderson
6 MIN READ

Every week for the past five years, Destiny Worthington has sat in a chair watching donated blood pump through narrow plastic tubing into her body. At the City of Hope Comprehensive Cancer Center in Los Angeles County, she spends up to six hours every week getting blood work done followed by blood and platelet transfusions.

When she was 15 years old, Worthington went to a required routine physical for her softball team. At the time, she had a lot of bruising on her body, so doctors ran blood tests for leukemia, various types of anemia, and other blood disorders.

“I actually wasn’t diagnosed back then. They just knew that something was wrong,” said Worthington, whose bruising and lack of energy was eventually explained by a diagnosis of severe aplastic anemia, a rare condition in which a person’s body stops producing enough new blood cells.

Worthington, 30, wakes up most days feeling tired and experiences fatigue and exhaustion when she does physical activities like hiking. She is one of thousands of patients looking for bone marrow donors through Be The Match, a registry operated by the nonprofit organization National Marrow Donor Program. Every year in the United States, about 12,000 people up to age 74 need bone marrow or umbilical cord blood transplants for survival.

Bone marrow donors go through one of two procedures when they’re found to be a match: a peripheral blood stem cell process, where the donor has a needle inserted into an arm that collects stem cells; or a surgical procedure, where the donor is put under anesthesia and then has bone marrow extracted from the lower back region. Most donors go through the first process. Each process often leaves the donor slightly bruised, but that’s about the worst of it.

The likelihood of a person matching with an available donor on the Be The Match registry ranges from 19 to 80 percent, depending on their ethnicity, according to worldwide data from the organization.

Worthington is mixed race; her dad is African American, and her mom Cuban. In recent years, there have been numerous reports that the number of Black bone marrow donors is too low. Black people seeking a bone marrow transplant have about a 23 percent chance of finding donors, compared to 41 percent for people who identify as Asian and Pacific Islander, 46 percent for Hispanic or Latino people, and 77 percent for White people. Mixed race people have the biggest challenge, because only 3 percent of registered donors identify as mixed race, according to Be The Match.

This is a medical problem because people tend to match with others in their ethnicity group. While more than 20 million potential donors are on the Be The Match registry and some communities of color are overrepresented when compared to the U.S. population, many patients have not matched with a donor because of the vast genetic diversity of each group.

For Black people, whose donor pool is exceptionally small, closing those disparities is crucial. But, advocates say, medical professionals must first acknowledge historical and current racism in the field.

Black people have been mistreated and abused for medical purposes since slavery. In the Tuskegee experiment, in which Black men with syphilis were deprived of sufficient medical care for decades, leading to serious complications like blindness and death. And before that, plantation physicians experimented on Black women, most famously the father of modern gynecology, James Marion Sims, who performed life-threatening experiments on female slaves.

That history of medical violence has resulted in a general mistrust among Black Americans toward health practitioners. For example, a 2017 poll found that 1 in 5 Black people avoided medical care because they were concerned about discrimination.

Despite the demand for Black bone marrow donors being high, awareness is low. For years, organizations weren’t committing enough resources to be present in Black communities to build trust and register them as donors. Only 4 percent of the roughly 20 million potential donors on the Be The Match registry identify as African American or Black. Only about 1 in 430 U.S. registry members donates to a patient, with matching potential largely predicted by a person’s tissue type, according to Be The Match.

“If you have a relatively common tissue type, you might be one of many who could match a searching patient,” wrote by email Kate McDermott, public relations specialist at Be The Match. “If you have an uncommon tissue type, you may never match a patient, or you might be the only one out of more than 20 million registry members who can be someone’s cure.”

That’s why Be The Match is “also communicating and educating people on myths or at least concerns with things that have happened in the past, how is it different now,” said Gift Matemba-Mutasa, director of donor recruitment at Be the Match. His job is to help increase the number of donors of color on the registry.

One way the donor organization is trying to educate is by hiring interns at Historically Black Colleges and Universities to host information tables at events and give classroom presentations about the bone marrow donation process.

Be The Match is now assessing the impact of its outreach initiatives.

“We’re seeing initial positive results, but, again, it is too early to say for sure what’s working [versus] what’s not,” McDermott wrote.

In 2016, I started my journey as a Black donor. At the Craig Newmark Graduate School of Journalism at CUNY, where I was earning my master’s degree in journalism, a Be The Match representative had a table in the lobby, and she asked me to fill out a card with my ethnicity and other background. I swabbed my mouth and registered to be a donor. The whole process took a little over 5 minutes.

Years prior, I saw a Facebook post where a friend talked about another friend who had donated bone marrow to his sister needing a transplant. My friend mentioned the low numbers of Black donors on the registry and urged others to register as donors as she had done. At that table on the CUNY campus, I’d already known about my potential impact as a Black donor, so I decided to add myself to the registry.

I didn’t think much of my role as a donor for the next few months. Then I got a call and a couple of emails from the organization. I was a potential match for a 44-year-old woman with non-Hodgkin lymphoma in need of a transplant. They asked whether I wanted to get tested to determine compatibility.

I agreed to get tested, and the donation process began. On a morning in May 2017, I traveled from Brooklyn to New Jersey for the procedure. An anesthesiologist put me under to extract bone marrow. For about a week, I was sore, but that pain is hard to compare to people like Worthington, who often has very low energy and doesn’t work as a result.

Worthington has been searching for a donor for about a decade and hasn’t found one who is more than a 50 percent match. (Anyone who is considered a healthy adult between the ages 18 and 44 can become a donor.) The blood and platelet transfusions she gets every week give her energy for about three days—then she’s back to feeling dizzy and weak. Finding a match and getting a successful bone marrow transplant would give Worthington more energy and, she said, she’d be able to enjoy life without those symptoms.

“If I was to take a 50 percent match, I would have like a 1-in-3 chance of survival,” Worthington said. “That’s why I didn’t take it when it was offered to me two years ago.”

When she was diagnosed with aplastic anemia, Worthington had to give up most physical activity. She said she’d like to have that part of her life back.

“I know it sounds weird, but my biggest joy would probably be to be able to run without getting dizzy,” she said. “Not anything over the top. Just getting a regular day.”

Editor’s note: A previous version incorrectly described the Tuskegee Airmen as being infected by doctors with syphilis. It has been corrected.

A New Food Court Offers a Leg Up for Local Eateries

“See You Yesterday” Filmmakers Use Sci-Fi to Discuss Police Brutality