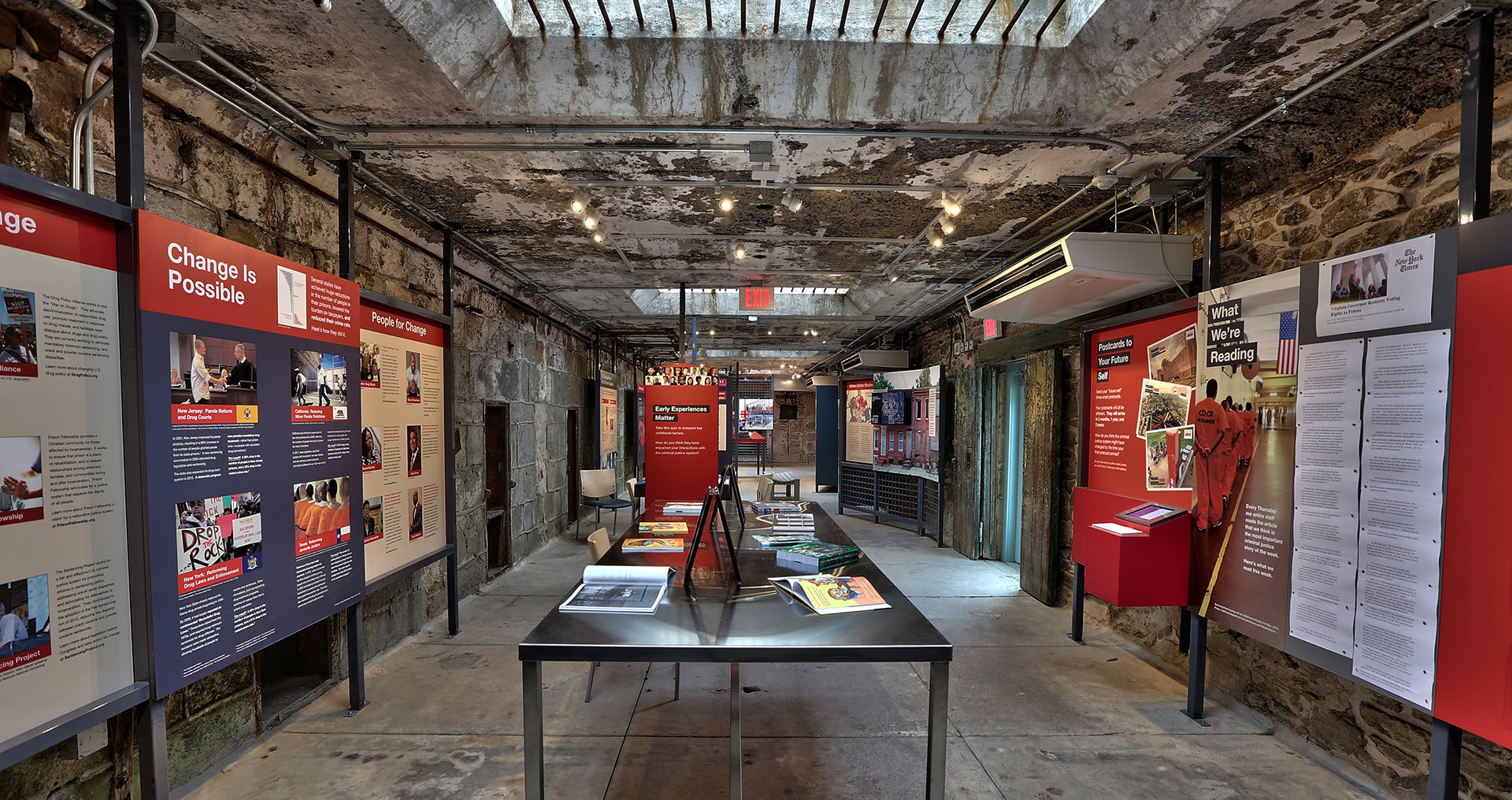 A 190-year-old prison complex in Philadelphia, once the largest and most modern prison in the world, is finding new life in the 21st century’s criminal justice reform movement.

The last inmate left Eastern State Penitentiary in 1971. Today, it’s a museum whose crumbling walls attracts history buffs, ghost hunters and amateur photographers. But its curators also use exhibits and displays within the sprawling 11-acre complex to challenge our thinking about how criminal justice is meted out in a country that locks up more people than any other and about the influence that race, power, and money can have on whether and how a person gets punished.

“With 2.2 million Americans in prison, this is a conversation we should be having,” says Sean Kelley, senior vice president and director of interpretation for Eastern State Penitentiary.

“With 2.2 million Americans in prison, this is a conversation we should be having.”

When Eastern State became a museum in 1994, its mission was to serve as a neutral public forum to discuss incarceration issues. But by 2010, as the U.S. prison population hit an all-time high, and politicians on the left and right began talking about the urgency of reforming the criminal justice system, staying neutral no longer seemed like the moral choice.

“We began to recognize our form of neutrality was mostly taking the form of silence,” Kelley says. “We weren’t saying much of anything.”

So Eastern State’s staff and directors added displays to show how America’s war on crime has resulted in skyrocketing mass incarceration rates, and to highlight how a national policy to prosecute people more aggressively and send them to prison longer has had no effect on the violent crime rate.

In the last 40 years, the number of people serving time in the nation’s prisons and jails has increased 500%. Disproportionately more of those behind bars are people of color, who make up 37% of the overall population and 67% of the U.S. prison population.

To dramatize those numbers, the museum commissioned a three-dimensional sculpture of a bar graph showing prison population growth. It’s on display in Eastern State’s courtyard, where inmates once played baseball in the shadow of the battlement-topped stone wall.

The staff calls it The Big Graph. It’s a 3-ton sculpture painted in tones of gray and fire-engine red, and it helps visitors visualize the statistics.

Kelley says the museum’s board took a big risk when it decided to abandon neutrality. The gamble has paid off, however, and attendance has more than doubled in the last eight years, to a quarter-million in 2018.

After The Big Graph was unveiled in 2014, the museum designed a new exhibit, “Prisons Today,” that asks provocative questions about who gets sent to prison and discusses the toll it takes on their lives. The museum also began employing people who had been previously incarcerated to lead some of the tours.

The “Prisons Today” exhibit poses this question: “Have you ever broken the law?” and asks visitors to consider the different types of crimes people commit all the time, such as driving under the influence. A display of letters written by people who were incarcerated, and those who got away with it, dramatizes how thin the line is between the two.

One writer described embezzling hundreds of dollars from the workplace – and never getting caught. Another wrote of shoplifting piles of clothes from a major department store – and getting away scot-free. The letters sit side-by-side with those of former prisoners who detail the mistakes that sent them to prison. The crimes are strikingly similar.

“Most of us define criminality by a conviction, but everyone knows that people get away with crimes all the time,” Kelley said.

One exhibit features a display that shows how in prisons across the U.S., a large number of incarcerated Americans come from just a handful of deeply impoverished neighborhoods. And research has found that it costs us as taxpayers more than $1 million a year to keep those residents imprisoned. The work, by Laura Kurgan of the Spatial Information Design Lab and Eric Cadora of the Justice Mapping Center, is highlighted in the exhibit, posing the question: Is this the best way to invest in America’s poorest neighborhoods?

After spending three years at the Pennsylvania State Correctional Institution at Muncy for retail theft, Marney Penn took a full-time job as a tour guide at Eastern State last year. She leads tours of the dining hall, and weaves in stories of her life at Muncy.

She tells stories of using items bought from the commissary to build a primitive cooker, called a stinger, to warm processed prison food and make it more palatable. For Thanksgiving one year, she smuggled turkey back to her cell and combined it with a bagel and cream cheese to make a kind of Philly cheese steak sandwich.

Penn, who is African American, says because of her race she fell at the bottom of the pecking order for work assignments. She ended up working in the kitchen, one of the prison’s toughest jobs, where she labored seven days a week, at 19 cents an hour.

“I share that experience because people really don’t understand what it takes for a person to live in a prison, and survive on prison food,” she says.

At Muncy, Penn experienced a system that turned a blind eye to mental health, or medicated people so heavily that they deteriorated under the drugs. She recalls shouting for help for nearly 20 minutes one day while witnessing another prisoner beat her head against the wall.

White prison guards often used their power to subjugate prisoners of color, she says. Early in her sentence, a guard barked an order at her that she didn’t understand. When she asked him to clarify, he said she was being insubordinate. Sent before the prison parole board for disciplinary action, Penn lost her case. Months later, the guard came up to her and apologized. But by then it was too late; Penn’s sentence had already been extended from one year to three.

The largest prison in the world

Eastern State was the largest and most modern prison in the world when it opened its doors in 1829. The building had running water and central heat at a time when even the White House lacked those conveniences.

Its cellblocks were designed so that each prisoner served his or her entire time in solitary confinement, locked away in a tiny cell. Its founders believed solitary confinement and strict disciplinary rules would inspire penitence, or true regret, in the hearts of its prisoners. Inmates had no contact with other people, not even the guards, who provided meals through a meal slot.

That novel – some would say cruel – approach to criminal justice drew visitors from around the world, including English author Charles Dickens, who visited Eastern State in 1842, interviewed some of the inmates and likened the prison’s harsh system to being “buried alive.”

In the 1900s, Eastern State moved away from solitary confinement to a system that allowed prisoners to live and work together.

For Penn and other formerly incarcerated individuals employed at Eastern State, working at the prison represents an unusual second chance.

In prison, Penn had taken classes in fiberoptics installation, and received certification in the field. But once she was released, she couldn’t get a job because she had no experience. She has learned of cases where men with felony convictions got good-paying union jobs as laborers because of their physical strength — opportunities that were closed to her, as a woman. The job at Eastern State has been a lifesaver, she says. “If I didn’t have this job, I don’t know where I’d be working.”