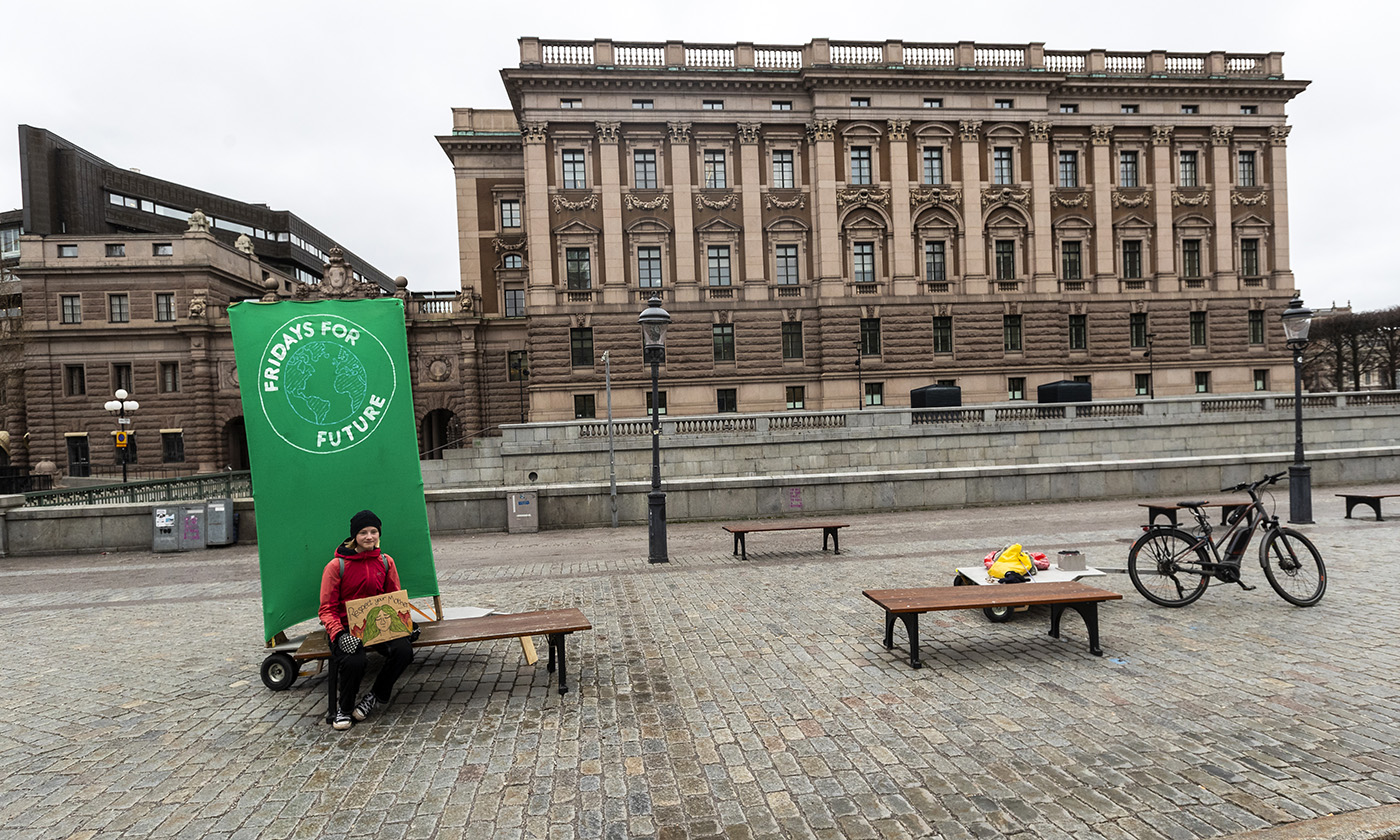 A lone climate change protester sits outside of the Swedish parliament building as Stockholm closes down because of the ongoing Covid-19 outbreak on March 20, 2020 in Stockholm, Sweden.
Photo by Michael Campanella/Getty Images
“This is a moment when we can implement measures to help boost the economy, create jobs, and build climate resilience.”
By Jessica Corbett
5 MIN READ

“This is a moment when we can implement measures to help boost the economy, create jobs, and build climate resilience.”

A burgeoning chorus of climate campaigners and experts is urging political leaders to learn from how governments handle the coronavirus outbreak and, as the pandemic subsides, to seize the opportunity to both revive the world’s economy and battle the climate emergency by implementing a global Green New Deal.

As the number of global COVID-19 cases soared past 200,000 and the death toll topped 8,700 on Wednesday, governments scrambled to continue managing the public health and economic crises while many offices, restaurants, schools, stores, and transportation services around the world remained closed.

Evan Weber, political director of the youth-led Sunrise Movement, responded to Trump’s move on Twitter by pointing out that the president could do the same to tackle the climate crisis, which scientists warn requires “rapid, far-reaching, and unprecedented” societal changes, including a swift transition to renewable energy.

Weber noted that ambitious action by the government and private sector on a scale often reserved for wartime is “part of the vision behind” the Green New Deal, which aims to dramatically curb climate-heating emissions. “The second part,” he said, “is doing it in a way that is just and equitable.”

✅Providing, good, well paying jobs
✅Getting Medicare for All &
✅Implementing the GND for Public Housing Act

all while reinvesting in sustainable infrastructure for our country. https://t.co/w8ON0l3Oba

Arn Menconi, an environmental activist and Democratic candidate for Colorado state Senate, tweeted Wednesday that “coronavirus has proved we can afford the Green New Deal and Medicare for All.”

As the virus has spread across the United States—shutting schools and businesses, spurring economic uncertainty, and sickening and killing people—critics of the country’s for-profit health care system, including Democratic presidential candidate U.S. Sen. Bernie Sanders (I-Vt.), have doubled down on calls for a nationwide single-payer program.

Faced with a health care system system that limits access and an “outrageous” and “ineffective” response to the pandemic from the government and employers, author and historian Jeremy Brecher, who co-founded the Labor Network for Sustainability, wrote for Common Dreams on Wednesday that workers and communities can lead the way with a “do-it-yourself Green New Deal” that puts people to work meeting the most urgent needs of this moment.

“So far the GND has been aimed primarily at challenging climate destruction and inequality. But our most urgent need right now is to protect against COVID-19 and the devastating impacts it will have on our communities and our jobs,” Brecher explained.

After detailing some key needs—from ensuring access to health care and food to establishing shelters and providing relief to healthcare workers—and efforts in various localities to treat the ill and contain the virus, Brecher noted that “a ‘do-it-yourself’ emergency program today could serve in a different political climate as the basis for the ‘green jobs for all’ program that is a central part of the Green New Deal.”

Some Green New Deal advocates see the COVID-19 outbreak as a signal to the international community that it is necessary to reform humanity’s relationship with nature, pointing to concerns that “as habitat and biodiversity loss increase globally, the coronavirus outbreak may be just the beginning of mass pandemics.”

Sharing a Guardian report warning that the new virus could be just “the very tip of the iceberg” in terms of animal-borne diseases infecting humans, the Democratic Socialists of America (DSA) tweeted Wednesday that “the coronavirus pandemic makes what we’ve already known clear: we need a Green New Deal to stop climate change, provide desperately needed jobs, and halt future mass pandemics.”

Are pandemics Gaia’s immune system fighting back? Are we the virus?https://t.co/qkljoeM58u

Economic experts have also suggested that economic recovery from the virus should involve investments in transitioning the global energy system. Helen Mountford, vice president for climate and economics at the World Resources Institute and a former Organization for Economic Cooperation and Development official, told Bloomberg Green on Wednesday that “we have a great opportunity now to transition more quickly.”

“This is a moment when we can implement measures to help boost the economy, create jobs, and build climate resilience,” Mountford said. She also warned that returning to fossil fuel projects that were recently halted over environmental concerns would be a “huge risk.” As she put it: “That’s coming out of one health crisis and trying to boost the economy by leading us into another health crisis in terms of air pollution and climate change.”

Ocasio-Cortez, the driving force behind a Green New Deal in the United States, discussed the creation and goals of the 14-page resolution she sponsors in an interview with Rolling Stone on Wednesday. “The Green New Deal [was] worded very deliberately,” she said, “because what was very important for us is that we had to put out a comprehensive vision with underlying principles.”

“No matter what kind of policy we’re talking about, it had to be bound by three things,” Ocasio-Cortez continued. “The first is a drawdown of carbon emissions on a 10-year timeline. The second is the creation of jobs—having this be industrial policy to create millions of jobs and provide an economic stimulus for working people, not for Wall Street. And the third was to center front-line communities, to make sure that this policy was not just prosperous and scientifically sound but that it was just.”

In the short term, we need emergency measures to get people through.

The GND was written as a stimulus for people+planet. https://t.co/Bsd2J8BZAm

Support for a Green New Deal has taken off around the world, spurring similar proposals in other countries and regions. Laurie Macfarlane, economics editor at openDemocracy and a research associate at the UCL Institute for Innovation and Public Purpose, argued last week that “restoring the status quo” after the COVID-19 pandemic “would be an active decision to deepen our environmental crisis.”

“Governments could forge a different path by unleashing a vast program of investment to decarbonize the global economy as fast as is feasibly possible, and bring our environmental footprint within fair and sustainable limits,” Macfarlane wrote. “The effect would be to mobilize resources to transform our energy, transport, housing, and agriculture sectors, decarbonize production and consumption, and restore our natural ecosystems.”

“Countries that have contributed the most to environmental breakdown have a moral obligation to lead by example, and support other countries as part of a global just transition. As well as placing the global economy on a more sustainable path, this would create a new wave of high-skilled, low-carbon jobs,” he added. “This plan has a name: a Global Green New Deal. In the face of a growing environmental emergency, it’s the only game in town. We simply cannot afford a return to business as usual.”

That call was echoed in a series of statements from author and sustainability educator Daniel Christian Wahl tweeted Tuesday by Extinction Rebellion:

Time to switch to GameB – a globally cooperative humanity worth its name … united in the commitment to create conditions conducive to life and redesign the human impact on the planet from exploitative and degenerative to healing and regenerative.

We are now pushed to a global mobilisation of resources and civic participation that the planet has not seen before. Let us not waste time by pretending that what we had before was working or is worth returning to."
— @DrDCWahl #RegenerativeCultures #Regenerate2020 4/4

This article was originally published by Common Dreams. It has been published here with permission.