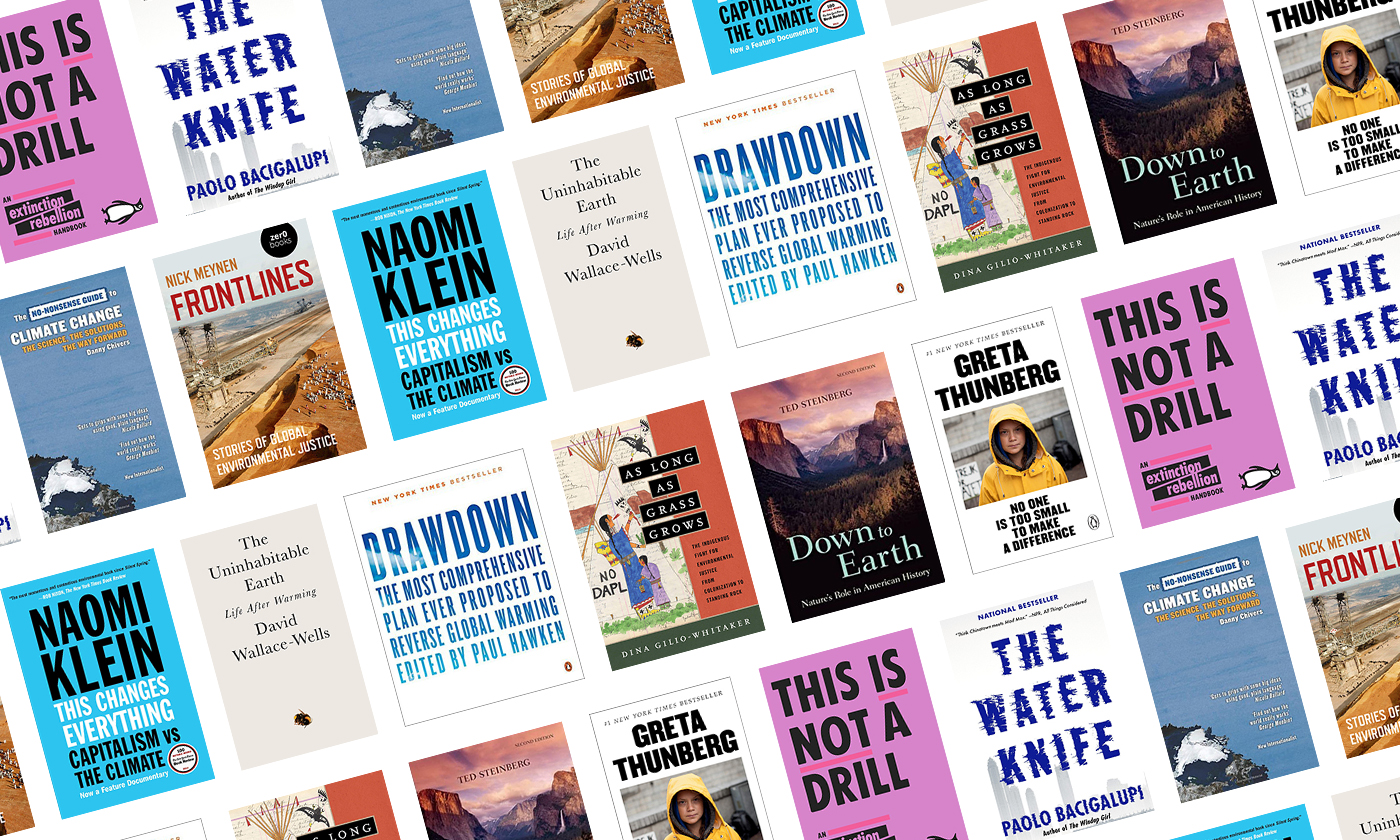 PHOTO ILLUSTRATION BY YES! MAGAZINE
Prepare to be informed and inspired!
By Julia Fine
6 MIN READ

This story is part of Covering Climate Now, a global journalism collaboration strengthening coverage of the climate story.

A record number of Americans are concerned about climate change, a recent study by the Yale Program on Climate Change Communication and George Mason University’s Center for Climate Change Communication found. If you’re among them, you may be interested in learning more about the climate crisis and what you can do about it. Luckily, you don’t have to comb through scientific papers to educate yourself (unless you’d like to): More and more books on climate change and climate action are published every year, ranging from grimly realistic takes on the severity of the crisis to optimistic visions of social and technological solutions. To find out which ones are worth a read, Teen Vogue reached out to 11 climate activists for their recommendations. Here are the books they said were most informative and inspiring.

1. Down to Earth: Nature’s Role in American History by Ted Steinberg

“Down to Earth is a history of North America from an environmental perspective. It’s an easy read and very interesting. One chapter explains how we used to know where our food came from, but eventually we pushed agriculture out to the sidelines of our cities, causing many other problems. Down to Earth made me realize that this country was founded on exploitation and that everything we do has an impact.”
—Natalie Blackwelder, commissioner of sustainability, Santa Barbara City College

2. Drawdown: The Most Comprehensive Plan Ever Proposed to Reverse Global Warming by Paul Hawken

“Drawdown is a handbook for how to stop and then reverse climate change. It lists dozens of actions to not just avoid putting carbon dioxide into the atmosphere, but to draw carbon dioxide down out of the atmosphere. When you combine ‘family planning’ and ‘educating girls’ from the top 10 actions list, they draw down more CO2 from the atmosphere than anything else on the list. Feminism literally saves humanity from climate catastrophe.” —Cassian Lodge, LGBTQ+ and environmental activist, U.K.

“When I felt overwhelmed at the big challenge of stopping climate change, this book broke things down to something manageable. It’s like a playbook of climate solutions. I was fascinated to learn about marine permaculture, which is one of the proposed solutions. It’s a method of growing seaweed on floating platforms that not only removes carbon from the atmosphere, but can also restore life to the oceans and provide an economic boon to coastal communities. I’ve since learned a lot about it, and I even helped lead a fundraiser that will help build some platforms off the coast of Tasmania.”
—Mark Abersold, software developer and Citizens’ Climate Lobby member; moderator for Reddit’s Climate Offensive forum

“Nick Meynen’s storytelling is personal, powerful, and inspiring. Every unpacked frontline is one cutting edge of an economic system and political ideology that is destroying life on earth. Revealing our ecosystems to be under a sustained attack, Meynen finds causes for hope in unconventional places. He reminds us that it is up to each and every one of us to play our role in the fight to achieve the radical changes necessary to save the planet.”
—Paola Hernández Olivan, food project and policy officer, Health Care Without Harm, Brussels

4. No One Is Too Small to Make a Difference by Greta Thunberg

“No One Is Too Small to Make a Difference contains the speeches made by the Swedish environmental activist Greta Thunberg—in climate rallies across Europe, to audiences at the U.N., the World Economic Forum, and the British Parliament. Greta inspires me because she says it like it is. She doesn’t wrap the truth up in pretty paper to make it easier to take. Among millions of activists, Greta has one of the most powerful voices because she occupies the moral and ethical high ground of someone from the next generation whose life is being destroyed.”
—Christine Essex, coordinator, Extinction Rebellion Newbury

5. The No-Nonsense Guide to Climate Change by Danny Chivers

“This is the clearest and most succinct book I have ever read about the nature of climate change, the forces that are blocking action on it, and the forces that have arisen to confront it. I teach classes on this subject, and this book works year after year to bring everyone up to speed on the problem and potential actions we can take. It’s funny, readable, engaging, and powerful.”
—John Foran, professor of sociology and environmental studies at the University of California, Santa Barbara

Favorite passage: This is going to be the most amazing, inspiring, and unifying social movement that the world has ever seen. It’s going to be difficult, and frustrating at times, but it’s also going to massively enrich the lives of everyone who’s a part of it. This includes you.… [You can] be part of the most exciting and important social uprising of our lifetimes.

6. The Water Knife by Paolo Bacigalupi

“By the author of The Windup Girl, The Water Knife is a fictional portrayal of the effects of climate change on the western United States. It includes scenes of trying to get by in Phoenix when it’s basically a desert. It’s a powerful, well-written story that emphasizes the impacts of climate-induced social collapse on women.”
—D. Kempton, Climate Reality Canada, Drawdown Newmarket-Aurora

7. As Long as Grass Grows: The Indigenous Fight for Environmental Justice, From Colonization to Standing Rock by Dina Gilio-Whitaker

“This book covers the 500-year history of Native American resistance to colonialism and ecocide. It contextualized my environmental work as part of a struggle that has been taking place in the Americas since European contact, and it made me feel more connected to the larger Native American environmental movement as a cohesive whole both over time and across cultures and places. For Native people, this book is a reminder of how connected and similar our environmental justice struggles have been. This is especially important because the climate crisis requires cooperation across cultures and locations in an unprecedented way.”
—Shaylon Stolk, Indigenous (Scottish/Wayúu) renewable energy scientist and organizer with Extinction Rebellion justice; based in occupied Duwamish land (Seattle)

8. The Uninhabitable Earth: Life After Warming by David Wallace-Wells

“This book offers specific, science-based predictions about the effects of unchecked global warming. It scared me silly, and it inspired me to reflect and act.”
—Gregg Long, high school English teacher, Illinois

Favorite quote: It is worse, much worse, than you think.

9. This Changes Everything: Capitalism vs. the Climate by Naomi Klein

“This Changes Everything makes the case that the climate crisis is a consequence of capitalism, but it is a crisis that offers an opportunity to organize a new political system. It convinced me that we won’t invent or grow our way out of this problem, but that it can be solved by political organizing. It’s sobering and empowering, which is a difficult tightrope to walk.”
—Evan, Climate Justice committee coordinator, Democratic Socialists of America, Los Angeles chapter

Favorite passage: And that is what is behind the abrupt rise in climate change denial among hardcore conservatives: They have come to understand that as soon as they admit that climate change is real, they will lose the central ideological battle of our time—whether we need to plan and manage our societies to reflect our goals and values, or whether that task can be left to the magic of the market.

“This Is Not a Drill is a handbook on nonviolent civil disobedience for the challenges of the 21st century. Only a mass social movement will save us. This book provides the tools for that.”
—George, youth climate activist, U.K.

Favorite passage: We may or may not escape a breakdown. But we can escape the toxicity of the mindset that has brought us here. And in doing so we can recover a humanity that is capable of real resilience.

This story originally appeared in Teen Vogue and is republished here as part of Covering Climate Now, a global journalism collaboration strengthening coverage of the climate story.