The Gig Economy Issue: From The Editors

#IamtheGigEconomy: Love Being Your Own Boss or Desperate for a Traditional Job?

The Gig Economy Issue: From The Editors 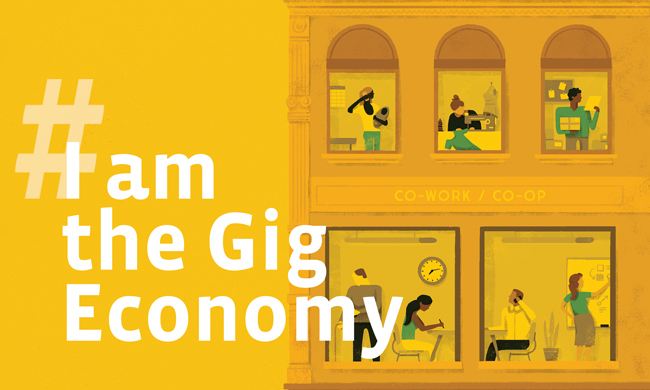 #IamtheGigEconomy: Love Being Your Own Boss or Desperate for a Traditional Job?

Tell us about your gig life by using #IamtheGigEconomy.

We know a bit about the gig economy from experience.

Sometimes you want a regular job, but you can’t get one. Senior editor Stephen Miller arrived in Seattle during the recession. Initially unable to land a steady job, he cobbled together rent by picking up gig work as a musician, freelancing as a writer and editor, and cleaning boats on Lake Union.

Other times, you want your freedom. In the years before James Trimarco became an editor at YES!, he did everything he could to avoid having a traditional job. He worked for temp agencies doing factory and warehouse jobs. He took seasonal jobs on political campaigns or fundraising efforts, edited people’s Ph.D. dissertations, and refinished the floors in their homes. He says it was all about staying as free as possible so that he could focus on his activism during those years: the peace movement and local struggles for affordable housing in New York City.

Without knowing it at the time, people like us have been part of the mass migration of Americans out of traditional employment. Some of that migration has come from people trying to break free and focus their time on things that matter—their children, art, health, or community. For others the move has been less voluntary, as businesses ramp up profits by replacing traditional jobs with contracts with no benefits and no guarantee of work tomorrow.

All told, we’re at the point where roughly 40 percent of American workers are in some part of the vast, complex world of the gig economy. They’re contractors, freelancers, temps. They’re seasonal. They’re paid under the table. Only a tiny minority work for the app-based companies like Uber that get so much of the gig economy press these days. But that sector is growing fast.

As people who love creativity, we can see the appeal of freedom from old work models that rarely worked for women and families. And because we love community, we also see how this gigs-not-jobs model threatens the financial security of workers and their families. Most of this issue looks at how we might resolve these two things by creating something new, keeping the empowerment without the exploitation.

Part of the solution is to resist the temptation to think of the gig economy as new. Millions of workers — many immigrants and low-income people of color — have always dealt with the problems of precarious employment. We can learn from them. We’re already seeing Uber drivers organizing around labor centers like day laborers and domestic workers do, requiring codes of conduct for companies that hire contractors. Those are exciting responses from the grassroots.

Other workers are using the very technologies that allow companies to hire hundreds of thousands of contractors as organizing tools. Responses like these shine a light on the creativity and solidarity emerging from even the most precarious spaces of the gig economy.

Tell us about your gig life in the comment section below or use #IamtheGigEconomy.