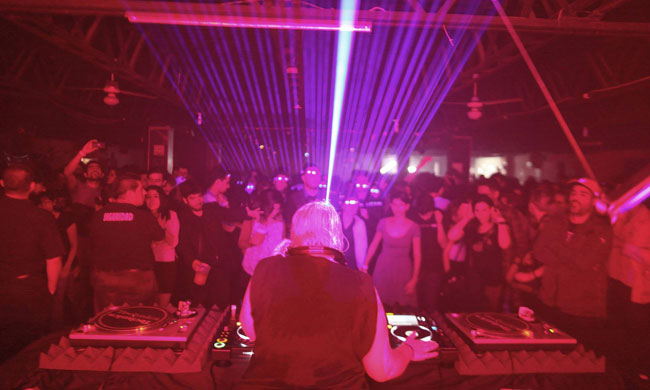 As the multibillion-dollar electronic music industry grows, artists and organizers are taking back the spaces and sounds of the marginalized people who started the genre.
By Keith Barbalato
6 MIN READ

A 2015 Forbes list of the highest paid Electronic Dance Music DJs celebrates 12 multimillion-dollar earners, all of whom are male and, with the exception of two, are also Caucasian. The same demographic shows up on major-festival main stages, where virtually no female DJs get booked, and where mostly white men are worshipped like gods by a largely homogenous crowd of fist-pumping fans.

“This music was taken from the people who grew up with it, created it, and had it as part of their subculture.”

But in small venues, like a hazy, laser-lit punk bar in Cleveland, a much more diverse crowd gathers to listen to experimental electronic, techno, house, and industrial music—on this occasion, for a party called “In Training.” The event is one of many like it cropping up across the country, representing a movement to take back spaces and sounds for the marginalized people who started this music. Aaron Vilk, one of the night’s organizers, describes In Training as a way of “establishing queer autonomy within a music scene that is otherwise being whitewashed.”

The popularity of Electronic Dance Music (EDM) is peaking; the genre is gaining fans faster than most others. According to a 2015 International Music Summit (IMS) Business Report, there was a 90 percent increase in EDM festival capacity in the United States between 2007 and 2014, helping to make EDM an approximately $2 billion-a-year industry in North America alone. EDM digital track sales increased by 8 percent in 2013, while sales in all other major genres like rock and hip-hop decreased.

When French EDM super duo Daft Punk’s famous 2006 Coachella performance outscaled and outproduced anything anyone had seen at an electronic music concert before, major corporations took notice of the market potential. Companies including HBO, FIFA, DISNEY, T-Mobile, and MasterCard partnered with EDM entertainment agencies and the focus turned to mainstream audiences.

In Chicago, in the late 1970s, a disco scene met with racial and homophobic tension was morphing into house—a style named after The Warehouse, the gay nightclub where the genre originated. House is distinguished from disco by its more aggressive rhythms and textures, which often feature anthemic female vocals emphasizing tolerance, freedom, sex, and the frustrations of oppression that clubgoers sought to transcend.

In the 1980s, techno music was sweeping across dance floors in Detroit, pioneered by the Black community that remained in this emptying metropolis. Jaun Atkins, Derrick May, and Kevin Saunderson, Detroit natives who made up the Belleville Three, are credited as the genre’s originators. Their up-tempo electronic pulses were influenced by the futurism of writers like Alvin Toffler, creating a soundtrack for, and an escape from, industrial collapse.

“It’s important to us to understand those roots, and understand how this music was taken from the people who grew up with it, created it, and had it as part of their subculture,” Vilk says.

She describes the political aims behind In Training as understated. Theories of mutual aid, queerness, spatial autonomy, and collectivism aren’t front and center, but influence how the event was conceived and is organized. The organizers actively work to maintain the highest standards of safety and openness for attendees, and appeal to an audience of varied ethnic and sexual identities. The unifying factor between these groups, in a segregated city like Cleveland, is simply the desire to have a good time. Here, people can unapologetically be themselves.

Shane James and Brian Bohan helped Vilk found In Training. As musicians and organizers who identify as queer—James and Vilk are trans—they have a unique perspective on marginalization. “In my experience, it’s knowing that I had to keep parts of myself behind or unarticulated so that I could feel accepted, so that I could carry an amount of social capital that I wouldn’t be afforded as someone among peers of mine who were very much more the status quo of straight white dudes making extreme music,” Vilk says.

In Training is playing a small part in the effort to reclaim the music’s roots, and its founders feel that they are chipping away at how dominant male, white culture has become the target demographic of this music. Similar groups are also influencing a new wave of producers in the electronic industry today. Perhaps nobody represents this more than Venezuelan artist and producer Alejandro Ghersi, better known by his stage name Arca.

In an interview with Pitchfork, he says that frequenting a New York City party called GHE20G0TH1k had a major impact on his life as a producer. “Meeting all these individuals who were so free and comfortable with themselves was an important part of my musical journey,” he says. That journey flickered between states of femininity and masculinity, a grey area where he found poetry.

“One thought can be really impactful. Someone like you doing something makes it a possibility for you to do it, too,” says Frankie Hutchinson, one of the founders of Discwoman—a New York-based collective that organizes electronic music festivals with all-female lineups.

Their aim is to represent and showcase cis women, trans women and genderqueer talent in electronic music. And what started out as a small weekend event in Brooklyn has spiraled into a booking agency, educational and networking resource, and international party.

The festivals are celebratory, Hutchinson says, but the bigger mission of Discwoman is to find a unique way to address broader problems, such as domestic violence and gender inequality. Female DJs find it difficult to book shows, and audiences have sometimes never seen a woman commanding the dance floor. Hutchinson says that a lot of male DJs have never even shared the stage with a female DJ, a realization that can help shift their awareness of gender issues.

The organizers also use the brand to address gender issues by hosting panel discussions, organizing educational seminars, and supporting women by connecting those with an interest in this music with those who want to teach it to them.

The founders of Discwoman plan on taking the festival and these conversations worldwide, organizing local talent in major cities abroad. So far, they have already taken Discwoman to Canada, Mexico City, Puerto Rico, and they have their sights on Europe and Asia as they gain more momentum.

Electronic music imagines a malleable future, one that is beyond our default view and unconstrained by the instrumental limitations faced by other genres.

“There is something nonconforming about electronic sound itself,” says Tara Rodgers, musician and author of Pink Noises. Alterity has always been strongly associated with this music in the cultural imagination, which might be rooted in its contrast to the “natural” tones of acoustic instruments. Artists have embraced this to “express their own radical visions or even mythologies of difference,” she says, making it “a fairly hospitable realm for artists who wish to challenge conventions.”

Just as DJs in Detroit and Chicago invented this music as a way to address the social and political challenges they faced, people like Vilk, Hutchinson, and Kevin Kauer, DJ, producer, and Seattle club promoter, are using it to address our own. To Kauer, electronic club music’s relevance today is in creating something unique in spite of corporate-fueled sameness; something he saw as a threat to the LGBTQ community in his neighborhood.

“We’ve become casualties of casual living,” he says. “Every app, every service, every tech company’s big new idea that comes out brings the standard of living closer and closer to that of instantly delivered satisfaction.”

Working to get people out of their homes, and giving them a more exciting option than Netflix on a Friday night is one part of Kauer’s idea of social justice. “It’s the fight to get people to continually break out of their shells and learn about things that happen outside of their living room.” This socialization process is a way to combat prejudice, he says. “Getting people out of familiarity, and into a tribal collective trance is part of creating a context for a kind of freedom.”

Rapper Brother Ali on Privilege, Hope, and Other People’s Stories