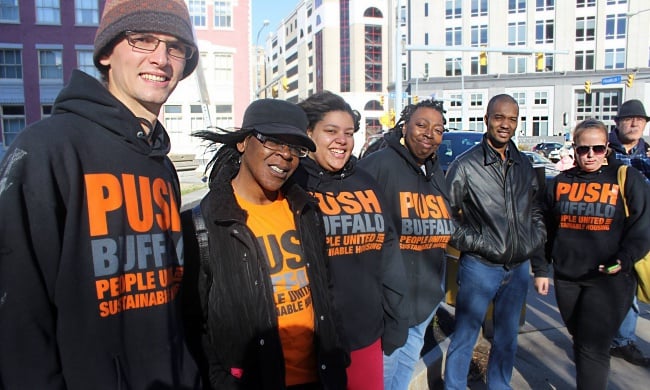 PUSH Buffalo is working to transform a 25-block area of the city into the beginning of a new community-driven sustainable economy.

Three places showing how to make the transition from domination and resource extraction to regeneration and interdependence.
By Rosa González &
Taj James
5 MIN READ

Think of it as a silver lining to the gathering dark clouds. We live in an era of extraordinary disruption, from the serial crises of a changing climate to the wrenching shifts of a globalized economy. But in that disruption lies the potential for positive transformation.

Addressing climate change requires adapting to the impacts that are already here—heat waves, droughts, superstorms and more—while preventing and mitigating future impacts. Taking these challenges seriously calls for radical changes in the way we live. It calls us to zero out our carbon emissions, and to rethink the systems that shape our lives, including the economy, food and power. It calls us to fundamentally transition from a world of domination and extraction to a world of regeneration, resilience, and interdependence.

It’s a tall order, no doubt, but that transition is already underway. In our work with movement builders on the front lines of the transition, we’ve identified two key guideposts—connectedness and equity—that point us toward the world we want.

Connectedness is the recognition that our well-being is inextricably tied to that of other people and the planet itself. It means there are no throwaway people, no throwaway places, no throwaway anything. In fact, there’s no “away”; there’s just here. In practice, connectedness is about lifting up the voices of the marginalized, and it means regenerating forgotten places, from industrial brownfields to hollowed-out rural towns and Rust Belt cities. The second guidepost, equity, is about recognizing and repairing the harm generated by situations of extreme power imbalance. Equity is about building power from the bottom up.

When communities are fully engaged in problem-solving, they come up with holistic solutions that address complex, interlocking challenges. Here are three.

When Superstorm Sandy ripped through the Eastern Seaboard in 2012, the waterfront neighborhood of Sunset Park was hit hard. Power lines toppled and businesses were shuttered. The neighborhood’s industrial district flooded, washing toxic residue into nearby residential areas.

But as the people of Sunset Park worked together to rebuild, a hopeful possibility emerged. What if the neighborhood rebuilt in ways that made the local economy more resilient and equitable, while limiting the impact of climate change? That’s the vision of UPROSE, a grassroots environmental justice group that took root in Sunset Park 50 years ago.

“Superstorm Sandy was a real wakeup call for our community.”

“Superstorm Sandy was a real wakeup call for our community,” says UPROSE director Elizabeth Yeampierre. “Climate change is here now, and waterfront communities like ours are extremely vulnerable.” The neighborhood’s low-income, immigrant residents were especially at risk, so in the aftermath of Superstorm Sandy, they turned to UPROSE for a community organizing effort to prepare for a wetter, more uncertain future.

The plan they came up with builds climate resilience while protecting the environment, health, and—crucially—jobs.

The point is not simply to rebuild what was there before; UPROSE members don’t want more jobs in the same dirty industries that had polluted the neighborhood for decades. “We have a lot of businesses on the waterfront, and we want to keep them here because people need places to work,” Yeampierre says. “But we want safe places to work.” To that end, UPROSE has joined forces with labor unions, the Center for Working Families, and business owners to transform Sunset Park’s industrial space into a manufacturing hub that produces environmentally friendly building and construction materials, powered by renewable energy. And they are encouraging these industries to hire locally.

The process of developing the plan was as transformational as the plan itself.

It’s a plan that addresses many problems at once. In a city with skyrocketing inequality and rampant gentrification, it could help preserve the blue-collar jobs that once anchored the middle class. At the same time, it could reduce toxic hazards and make Sunset Park a safer, healthier place to live. And it could reduce the carbon emissions that are driving that change.

The process of developing the plan was as transformational as the plan itself. UPROSE consults with residents on the future they want, then arms them with the tools they need to make that vision a reality. Some residents take on the role of block captains and gather input and educate their neighbors on city planning processes. Through partnerships with researchers, residents conduct participatory action research on issues of concern. It’s a deeply democratic, holistic approach that builds local power and increases community control over resources—key elements of community resilience.

Left behind by the globalized economy, Buffalo has lost more than half its population since 1950. By 2005, when the community group People United for Sustainable Housing (PUSH) Buffalo was founded, residents of the West Side neighborhood were struggling with unemployment, rampant blight, and high energy costs.

At that time, there were an estimated 23,000 vacant homes in Buffalo. PUSH took on a state housing agency that was using vacant buildings to speculate on Wall Street, and got the buildings turned over to the community—with funding to fix them up.

PUSH has cultivated a growing network of contractors who are committed to hiring locally.

Next, PUSH brought together hundreds of community residents to craft a plan for a large, blighted area. The result is a 25-square-block Green Development Zone (GDZ), which is now a model of energy-efficient, affordable housing. PUSH and its nonprofit development company rehabilitate homes in the GDZ, installing efficiency upgrades, like insulation and geothermal heating, that dramatically lower residents’ utility bills. The organization won a New York state grant to build 46 new homes, including a net zero house, which produces as much energy as it consumes.

The GDZ doubles as a jobs program. Through its construction projects, PUSH has cultivated a growing network of contractors who are committed to hiring locally. And PUSH successfully advocated for New York’s Green Jobs-Green New York program, which seeks to create 35,000 jobs while providing energy upgrades and retrofits for 1 million homes across the state.

A predominantly low-income community of color is challenging the oil giant that has long dominated their city.

In Richmond, the 3,000-acre Chevron refinery looms over the city with towering smokestacks and tangled pipes going in every direction. The largest of its kind in California, the Chevron refinery showers Richmond with unpronounceable toxic chemicals and periodic fiery explosions that put residents at risk. As a major source of jobs and tax revenue, Chevron has long held outsized influence on the city’s politics. But, fed up with their toxic neighbor, residents are working to counterbalance the company’s political muscle.

A predominantly low-income community of color is challenging the oil giant.

The first step was to activate community power. A coalition of local nonprofits including the Asian Pacific Environmental Network (APEN), Communities for a Better Environment (CBE), the Alliance of Californians for Community Empowerment (ACCE), the Richmond Progressive Alliance, and Faith-Works brought residents together to devise solutions to community problems.

At the same time, the Our Power campaign in Richmond is working to build community control over essential resources, such as food, land, water, and energy. Our Power partners with Cooperation Richmond, a local co-op incubator and loan fund that helps low-income residents create their own cooperatively owned businesses. The group holds the annual Our Power Festival, which brings together residents, small businesses, and the public sector to envision a transition to local energy management.

Despite this groundswell of community organizing, Chevron continued to hold sway on the City Council. So the organizers switched to electoral tactics to supporting progressive candidates who would stand up to the oil giant. And it worked. In 2014, despite millions of dollars invested in the election by Chevron, residents voted in candidates aligned with community values and renewable energy.

“Winning political power, especially in this political moment, is critical for communities at the intersection of poverty and pollution,” says APEN Action executive director Miya Yoshitani. “If we are going to win back our democracy from the hands of corporations, and win the powerful vision we have for living local economies, we need to invest in organizing the power of the people and the polls in all our neighborhoods.”

Arctic Waters Have Been Rescued From Drilling, But What About the Land?