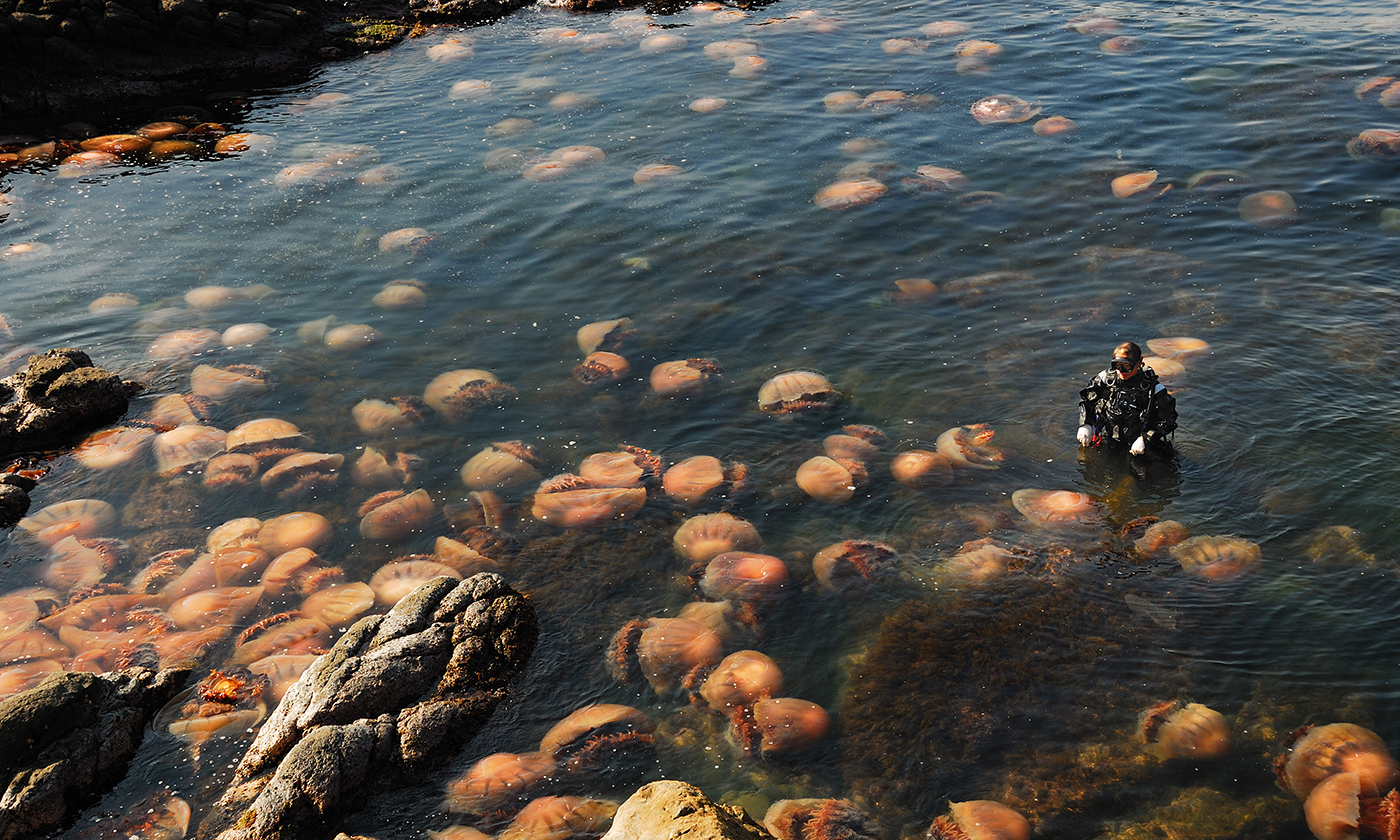 An invasion of giant jellyfish off the coast of Japan.
Photo by Lucia Terui/Getty Images
There’s the octopus in the parking garage, and 26,500 other signs that climate change is here.

In 2016, an octopus splayed out inside a Miami Beach parking garage went viral on the internet. Climate reporter Brian Kahn has kept a running log of these Dali-like moments on Twitter, labeling them “Postcards from the Anthropocene.” Recent features include: a man fly-fishing next to the Washington Monument (who ended up catching a carp); two men playing golf while a raging wildfire burns in the background; a man mowing his lawn while a tornado churns near his backyard; sunbathers during a heat wave in northern Finland sharing the water with a caribou; a police boat cruising down the center of a flooded interstate in North Carolina; servers and patrons carrying on with their dinner in ankle-deep water at a restaurant in Italy; and a firebomber airplane scooping up water just offshore from a surfing beach in California.

That Miami Beach octopus became famous because of a king tide, a phenomenon that occurs during the twice-monthly gravitational alignment of the Earth, the sun, and the moon, and is exacerbated by the rise in sea levels. It’s this kind of gradually escalating flooding that will likely force Floridians to permanently retreat from the coastline, not a devastating hurricane. By the 2040s, within the time span of most homeowners’ mortgages, the Union of Concerned Scientists predicts that chronic coastal flooding—defined as flooding that happens 26 or more times a year—could envelop 300,000 coastal homes now worth a combined total of more than $100 billion. And that’s just in the United States. By the end of the century, that figure could balloon to hundreds of trillions of dollars worldwide in the worst-case sea level-rise scenarios, a truly daunting prospect that climate scientist James Hansen has characterized as “the loss of all coastal cities, most of the world’s largest cities, and all of their history.”

Changes like these, at once pervasive and insidious, define our new planetary era. The simultaneous disturbance of nearly every ecosystem on Earth is helping opportunistic, weedy species flourish while specialized plants and animals race to adapt. There’s no better example of this than the worldwide boom in jellyfish, which have become a danger to swimming and power plants, and are newly dominating ecosystems all over the planet. …

The same thing that’s happening in the ocean is happening on land. Warming temperatures are increasing the metabolism rate of soil microbes like bacteria and fungi. As the tiny organisms break down decaying plant and animal matter at a faster rate, they release more highly potent greenhouse gases, like methane, which escalate global warming. Since microbial activity underlies literally all life on Earth, the fact that the behavior patterns of these organisms are rapidly changing is worrying.

A new era of urgently paying attention to nature has arrived.

Of course, there are more visible changes on land too. Many of the plants and animals that dazzle us, that we sing songs and write poetry about, are being profoundly disturbed. Fireflies, a staple of childhood summer evenings, are shifting to earlier emergence as springtime warms and rainfall patterns become more erratic. Rhododendrons, whose flowers are turned into juice in the Himalayas, now bloom an astonishing three months earlier in India. The iconic bluebell woods in Britain may not survive because the fragile flowers aren’t resilient enough to keep up with the shifting seasons. At the current rate of warming, the Douglas fir, a favorite for Christmas trees and the anchor of Pacific Northwest forests, may disappear entirely from the coastlines there by the end of the century.

In nearly every culture, in nearly every country around the world, people have always kept closely attentive to subtle changes in their surroundings and relied on input from the natural world to make sense of the orderly passage of time. Using records of everything from birdsong to flowers, there are now more than 26,500 independent signs of climate change. For more than a thousand years, the people of Kyoto, Japan, have kept track of the date of the appearance of cherry blossoms. The pink and white blooms now appear in April on average 10 to 15 days earlier than they did in the past millennium. In Micronesia, the greatest sailors who ever lived navigated thousands of miles over open ocean by watching the stars, the waves, the clouds, and the birds. Their descendants are now watching those same waves encroach on their homelands with increasing alarm. In Australia, more than 40,000 years of weather watching has long guided Aboriginal understanding of the seasons, and a 10,000-year oral history tradition is now helping them prepare for climate change by recalling and learning from a long-standing connection to the land.

A new era of urgently paying attention to nature has arrived. Lately, the behavior scientists are seeing is so unusual that it’s starting to seem more like tipping points are here.

This edited excerpt from The Future Earth: A Radical Vision for What’s Possible in the Age of Warming by Eric Holthaus (Harper Collins, 2020) appears with permission of the publisher.

Read an interview with author Eric Holthaus on just how hopeful the next 30 years could be here.

Anti-Fascism Versus the Police, 1980s-Style

Why Pessimism About the Pandemic Is a Good Thing

Why Pessimism About the Pandemic Is a Good Thing