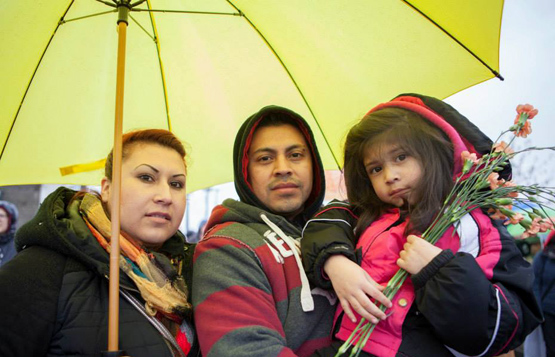 Supporters of detainees on hunger strike the Northwest Detention Center gather during a demonstration on April 5. Photo by Alex Garland Photography.

A look at the growing influence of undocumented voices in the movement for immigrant rights.
By Ray Stoeve
6 MIN READ

At 6:30 in the morning on February 24, Maru Mora Villalpando and eight other people locked their arms together and formed a human chain across the driveway of the Northwest Detention Center in Tacoma, Wash. A cold rain drizzled down as they stood in the path of a bus departing the facility, which held immigrants being considered for deportation, asylum, or residency. Through the tinted windows of the bus, Maru could just make out the silhouettes of people inside waving, straining to reach their shackled hands above the windowsill.

The movement has apparently gotten the Obama administration’s attention.

Both Maru and one of the other activists were undocumented, so by participating they risked not only arrest but also detention and deportation. But they carried out the action anyway, hoping it would make a strong statement against the policies of the Obama Administration, which has deported more than 2 million immigrants—more than any previous government.

As it turned out, their blockade did much more than make a statement. It helped set off a cascade of mobilizations led by undocumented immigrants themselves, who are increasingly going public about their status and taking the lead in the fight for immigrant rights. Their primary concern is the separation of families—for example, between July 2010 and September 2012, more than 200,000 parents were separated from their U.S.-born children through deportation, according to government data obtained by the online magazine Colorlines in December 2012.

On March 7, less than two weeks later, 750 out of the 1,300 detainees held at the Tacoma facility began a hunger strike, directly inspired by the bus blockade, in protest of detention conditions and the Obama Administration’s immigration policies.

Next, detainees held at the Joe Corley Detention Center in Conroe, Texas, began their own hunger strike inspired by the one in Tacoma. Both strikes are still underway, although detainees at both facilities say they have faced retaliation by GEO Group, the private prison corporation contracted by U.S. Immigration and Customs Enforcement to run the two detention centers.

The protests didn’t end there. On March 24, one month after activists locked down in Tacoma, seven members of the Alabama Coalition for Immigrant Justice chained themselves to the doors of the Etowah County Detention Facility in Gadsden. As in the Tacoma action, two of the Alabama activists were undocumented. All seven were arrested that day—and then, a few hours later, released.

“Ironically, being open about not having papers seems to make activists less likely, not more likely, to be targeted by immigration officials and deported,” says Ruth Gomberg-Munoz, an anthropology professor at Loyola University of Chicago who specializes in studying immigration.

She says the newfound political influence of undocumented immigrants “shows how even the most disempowered people can struggle for rights and recognition.”

Supporters of increased immigration enforcement, along with President Obama himself, often claim that most of those affected by detention and deportation are criminals. But since the 1990s, several amendments to the Immigration and Naturalization Act have greatly expanded the list of deportable offenses to include nonviolent minor crimes. And a recent New York Times analysis of internal government records found that under the Obama administration, “two-thirds of the nearly two million deportation cases involve people who had committed minor infractions, including traffic violations, or had no criminal record at all.” Only 20 percent of those deported had committed serious crimes.

And it’s not just undocumented immigrants who can be detained and deported—so can legal permanent residents and refugees seeking asylum.

“We want our mothers to see their parents, to be able to hug them and not arrive to visit their grave.”

A number of national campaigns are calling attention to these policies, from Not 1 More Deportation, started by the National Day Laborer Organizing Network, to #BringThemHome, an effort spearheaded by the National Immigrant Youth Alliance. The former organizes protests in the United States aimed at pressuring President Obama to end deportations, while the latter challenges the policy through events in which groups of formerly deported immigrants seek re-entry while supporters gather at the border. Most recently, the week of March 10 saw more than 100 people attempt to return from Mexico to the United States.

Most visible in the immigrant rights movement in recent years have been undocumented youth. Many call themselves “DREAMers” after the DREAM Act, a legislative proposal that has been introduced in various forms in Congress since 2001 but has never been passed. The act would give certain immigrants brought to the United States as children a path to citizenship. But DREAMers have also added their voices to the call for ending deportations.

“As undocumented advocates, we do want citizenship rights,” wrote DREAM activists around the country in an open letter published January 15, 2014. “We believe that this is our country, and our family’s home. We do want to be able to vote and voice our opinions. We cannot, however, wait for that to happen while our families are being persecuted.”

Their letter echoes a refrain common among undocumented activists: they are tired of waiting, tired of living in fear. “We want our mothers to see their parents, to be able to hug them and not arrive to visit their grave,” the letter continues. “We want to be able to drive without the panic of seeing a police officer in our rearview mirror. We want to be able to live knowing that we will come home and see our children at the end of the day.”

The movement has apparently gotten the Obama administration’s attention. On March 13, after months of claiming a legal inability to halt deportations, the president announced a review of current immigration enforcement policies.

Jose Moreno was one of the passengers on the bus that Maru and her fellow activists blocked back in February. At 25 years old, he has been living in the United States for almost seven and a half years. He is from Matamoros, a town on the Gulf Coast of Mexico just a stone’s throw across the Rio Grande from Brownsville, Texas. He decided to come to the United States, he says, because he is gay and this was not well accepted in his hometown. He came first to Florida, then made his way to Seattle, where he worked, studied for his GED, and sent money back to his family in Matamoros.

The organizers say the citizenship process should not involve private prison corporations such as GEO Group.

But in November 2013, he was arrested for driving under the influence—and because he is undocumented, he was transferred from the county jail to the detention center.

Inside the center, he discovered that detainees could work—but for only $1 a day. The meals provided by GEO Group were far from nutritious, yet the low wages made it hard to afford extra food from the facility’s commissary, let alone telephone calls to family members or lawyers—if a detainee was able to get a lawyer in the first place.

On February 24, Jose boarded a bus that would take him out of the facility to the Seattle suburb of Tukwila, where he would be fingerprinted for his visa application. Others were bound for deportation. But because of the blockade, none of them left the facility that day. After seeing what happened, Jose returned and told the other detainees about the support they had received from outside. Inspired, the detainees decided to organize a hunger strike.

“There were a lot of rumors that people always wanted to do it but they had never done it,” Jose says.

Shortly after the strike began, Jose was released on bond—and the wife of fellow hunger striker Ramon Mendoza connected him with Maru. Today, they are friends, working together to support the Tacoma strikers. Echoing the sentiments of activists around the country, they say the citizenship process should take place through civil court, without detentions, criminalization of immigrants, or the involvement of private prison corporations such as GEO Group. And they both dream of immigration reform.

“So we can have a legal status in the country,” Jose says, “because we practically belong to this country, we live here almost forever.”

There is a long pause as he searches for the words, starting and then stopping, Maru translating the pieces. “It’s hard to explain,” he says finally. “We’re not seen. Everybody that’s inside there, they have a regular normal life here, the only difference is they are not a U.S. citizen or were not born here.”

The invisibility experienced by Jose and many other undocumented immigrants may be changing. The strike he helped organize has garnered local and national media attention. Most recently, U.S. Representative Adam Smith toured the Northwest Detention Center, spoke with the strikers, and subsequently announced his plan for legislation that will address conditions in the detention center.

And activists are keeping the pressure on: April 5 saw more than 80 actions across the country in support of the Not 1 More Deportation campaign, including several hundred people who gathered outside of the Northwest Detention Center.

For Maru, who has lived in the United States for 18 years, supporting the hunger strikers is her first priority.

“I just want them out with their families,” she says of the detainees. “And I hope when they’re out they become activists. I hope our children see that when you do something, things change, and when you stop being afraid, when you start questioning why—Why is this right? Why should I comply?—things change.”