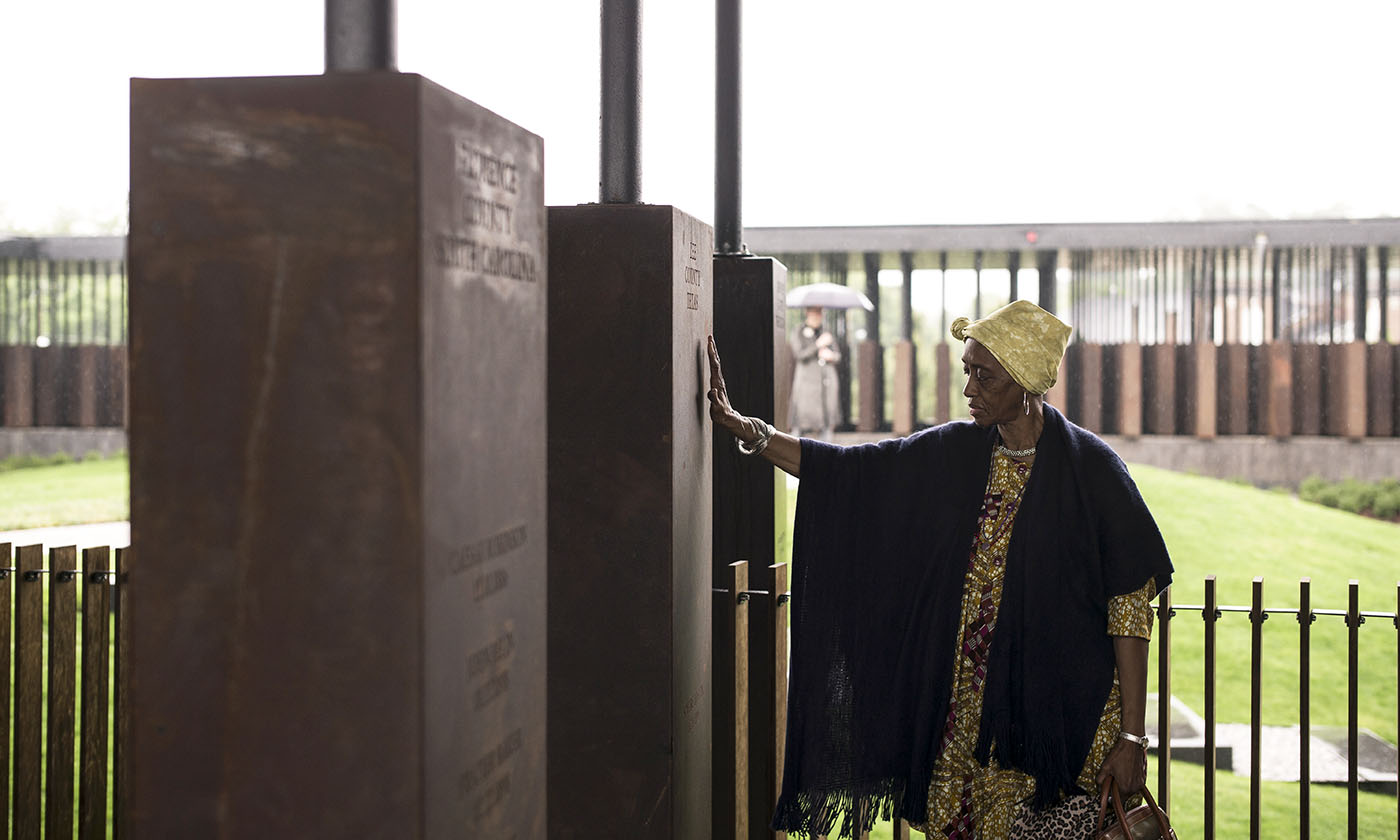 Wretha Hudson, 73, discovers a marker commemorating lynchings in Lee County, Texas, while visiting the National Memorial For Peace And Justice on April 26, 2018, in Montgomery, Alabama. Hudson, whose father's family came to Alabama from Lee County decades earlier, said the experience was overwhelming. "It's a combination of pride and strength, for my people. In our culture, rain is a sign of acceptance from our ancestors. So the rain is a sign of their acceptance for this day."
Photo by Bob Miller/Getty Images
Truth commissions and reparations programs can effectively involve all perspectives in a conflict about longstanding political and economic grievances.
By Benjamin Appel &
Cyanne E. Loyle
5 MIN READ

As the U.S. prepares to celebrate another year of its independence, the country is paying renewed attention to the founders, and how their legacy of slavery is linked to systemic racism.

Calls for reform to policing across the nation can help to directly reduce police violence against civilians but don’t address the centuries-old underlying problems in American society. Our research indicates that the country is not likely to escape its historic cycles of violence and racial oppression without addressing this painful and troubled history.

Sparked by the killing of George Floyd at the hands of the Minneapolis police, protests have emerged across the United States demanding police and criminal justice reform. Reform efforts abound—including Minneapolis city councilors declaring they will dismantle the police department, school districts cutting ties with local police, and states banning the police use of chokeholds.

Those efforts can make meaningful differences in individuals’ lives, but they do not address the systemic injustices perpetrated throughout the nation’s history. Our research into how war-torn and fractured nations find peace, justice, and societal reconciliation offers one possible approach. Truth commissions and reparations programs can effectively involve all perspectives in a conflict in a national-level discussion about longstanding political and economic grievances. In other countries, those efforts have led to sustainable and lasting peace in divided societies.

How do truth commissions work?

Typically, truth commissions create a forum where wrongs can be disclosed, examined, and confronted through education, prosecution, compensation, or other forms of redress.

Perhaps the most recognized example was South Africa’s Truth and Reconciliation Commission, established in 1995 at the end of apartheid. The commission collected personal statements from 21,000 victims of gross human rights violations at the hands of South Africa’s government and police. Much of this testimony was broadcast on national television. The commission later compiled and published a seven-volume report into the abuses suffered under apartheid, which included recommending reparation payments to victims and prosecutions for those denied amnesty.

Other countries have had similar processes aimed at righting wrongs. For instance, a Canadian truth commission documented the legacy of physical and sexual abuse inflicted on thousands of Indigenous Canadians in a program of forced assimilation and education. The findings led to a formal government apology, saying “Today, we recognize that this policy of assimilation was wrong, has caused great harm, and has no place in our country.” Its work also sparked reforms to the national education curriculum.

Truth commissions promote reconciliation when they help victims heal from the wounds of the past by publicly acknowledging those wrongs. Commissions also educate other members of society about the suffering incurred by victims through the publication of summary reports, public dissemination of findings, and education campaigns.

In the wake of Floyd’s death and the resulting protests, California’s U.S. Rep. Barbara Lee, a Democrat, has introduced legislation calling for the establishment of a national Truth, Racial Healing, and Transformation Commission to “fully acknowledge and understand how our history of inequality continues today.”

In recent years, others have suggested similar efforts to address anti-Semitism, racism, and other social injustices.

When are truth commissions effective?

Our work provides specific guidance about making these processes most effective.

First, they must include all parties to the dispute.

In a U.S. discussion of racial injustice, that means White and Black Americans must participate together. The commission’s hearings would be an important opportunity for Black Americans to heal through discussing their shared experiences.

But it is at least as important, or possibly more so, for White Americans to hear this information, which is likely to be unfamiliar to many of them—and acknowledge the long-term effects of slavery and systemic racism in U.S. society.

In South Africa, for instance, research found that the commission was most effective at changing the racial attitudes of White South Africans by teaching them about the abuses Black South Africans suffered. This facilitated reconciliation because once the truth was shared, people could apportion blame and responsibility.

Second, our research suggests that national-level processes are an important component of durable peace, as measured by the lack of a return to violence after civil conflict. Structural injustice is a nationwide problem in the U.S. Larger social change therefore requires an approach at the national scale.

Those processes can often lead to wider public understanding of how and why reparations, financial compensation payments to victims of wrongdoings, can be a vital part of national healing. These programs directly address the material and personal losses inflicted on the victims of prejudice and injustice. Some notable leaders such as author Ta-Nehisi Coates and media magnate and BET founder Robert Johnson have made the case for financial payments to Black Americans. That is one way to approach the wrongdoings.

Our work, however, finds that community reparations, such as funding for community development programs such as public spaces and hospitals and educational scholarships can also be effective when they are adopted as part of an effort that reveals truth and acknowledges grievances. Reparations can bring about social healing because they send a strong signal to the population that the government is committed to righting historical wrongs.

But a word of caution is also in order. Our work has found that reconciliation efforts can be susceptible to political manipulation and hijacking. Truth commissions and reparations can fail to bring about reconciliation when they do not incorporate diverse perspectives and experiences. Overcoming these challenges requires a national process with widespread participation across communities as well as strong community organizations and a free press to monitor its progress.

The killing of George Floyd has once again revealed the racism and racial oppression that continue to plague America. The protesters and their broad-based group of supporters also make clear that many in the country are ready for leaders to finally adopt a fundamentally new approach to racial equality.

It may be tempting for people to work locally to address these injustices, and those efforts can indeed make changes. But our research shows that a national solution would be the best way to heal from America’s “original sin” of slavery and longstanding institutional racism, and achieve lasting peace and justice.

This article was originally published by The Conversation and has been published here with permission.