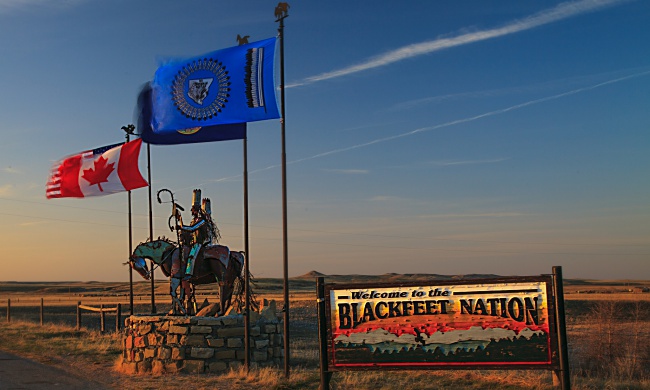 After 35 years of fighting for the cancellation of nearly 50 oil and gas leases, Montana’s Blackfeet tribe scored an unexpected victory when Devon Energy voluntarily backed out of their claims.
By Michael J. Dax
4 MIN READ

From atop the ancient buffalo jump, above the Montana land his family has occupied for generations, Terry Tatsey braced himself against the wind.

“I have to start teaching them to be responsible for this place.”

As Badger Creek’s oxbows meandered below, Tatsey, who sits on the Blackfeet Tribal Business Council, soaked in the gentle undulations of the green foothills and silhouetted peaks that stretched across the horizon as he described the responsibility he feels for the land.

“Blackfeet think of time in seven-generation increments, and my grandfather was the first generation,” he began. With his daughter beside him and the afternoon sun lowering behind the mountains, he gestured toward his grandkids running wildly around the hill, adding proudly, “Their grandkids will be the seventh generation. I have to start teaching them to be responsible for this place.”

Tatsey was just a teenager when the Reagan administration issued 47 oil and gas leases in the Badger-Two Medicine, a 130,000-acre region named for the Badger Creek and South Fork Two Medicine River drainages that is sandwiched between Glacier National Park, the Bob Marshall Wilderness Complex, and the Blackfeet Nation. Like the Standing Rock Sioux, the Blackfeet protested the leases because of the area’s cultural value and because it was not consulted before the leases were issued.

For 30 years the tribe fought for their cancellation, but as of 2013, 18 leases remained. That year, Solenex, LLC, a Louisiana-based company, sued the Interior Department for preventing it from developing its lease due to a moratorium established in 1997. With the fight reignited, the tribe partnered with several local, regional, and national environmental organizations. The goodwill fostered by this collaboration garnered national media attention as well as support from state and federal politicians and convinced the Interior Department to cancel Solenex’s lease earlier this spring.

“This is the right thing to do. It is truly a win-win situation.”

As the Blackfeet’s saga has progressed, the fight over the Dakota Access pipeline, which also stemmed from a failed consultation process, escalated over the course of the summer and fall. In spite of the Army Corps of Engineers’ recent decision to deny the final permit allowing the pipeline to cross the Missouri River and reopen the environmental review process, the election of the likely pro-development Trump administration has emboldened the pipeline’s proponents. Solenex, meanwhile, has said it will lobby the new administration to reinstate its lease, but when Devon Energy, the largest lease holder in the Badger, voluntarily relinquished its remaining 15 claims in mid-November, the Blackfeet and its partners scored an unexpected victory.

For many involved in the ongoing campaign, Devon’s announcement came as a surprise. Shortly after the election, an attorney for the Mountain States Legal Foundation, which represents Solenex, told The New York Times, “All it would take is for the Justice Department to enter the case and say, ‘We’ve reevaluated. We will lift the suspension, and we’ll permit the drilling to go forward.’”

Under this new political atmosphere, proponents of the Badger were preparing for a renewed fight, but at the Nov. 16 signing ceremony in Washington, D.C., Devon’s CEO, David Hager, appeared sincere. “We do appreciate how important this is to the Blackfeet people,” said Hager. “This is the right thing to do. It truly is a win-win situation.”

Leaders from the Blackfeet tribe and environmental organizations involved with the campaign had been in Washington to screen for federal legislators Our Last Refuge, a documentary that tells the story of the Blackfeet’s struggle over the past 35 years. With so many people close to the issue in town, Hager, Interior Secretary Sally Jewell, and Blackfeet leaders who had been working behind the scenes took advantage of the opportunity.

Casey Perkins, Rocky Mountain Front field director for the Montana Wilderness Association, has been working on the Badger issue for the past three years and was as surprised as anyone. She, along with others, had predicted that Devon would wait to see how Solenex’s challenge played out, but in light of the recent announcement, she said, “People are gratefully scratching their heads.” Tatsey also was surprised. “They never really pushed the issue, so they may have decided to pursue other options and respect the place and people,” he said. “Whatever helped in their decision, I’m grateful to Devon for that decision.”

In contrast to the Blackfeet, the Standing Rock Sioux face a much different reality.

The delegation of Blackfeet attending the Washington ceremony recognized the larger context that led to the announcement. In September, following a court decision that ruled against the Standing Rock Sioux, the Corps of Engineers, along with a number of other federal agencies, organized a series of meetings throughout the country to address how it could improve the tribal consultation process. Alluding to that move, the Blackfeet’s chairman, Harry Barnes, declared in his remarks, “I think this is a result of the Dakota Access pipeline.” He continued, “This directive today is a movement toward putting trust back into the ‘trust responsibility,’” he said.

Jewell also noted the importance of meaningful consultation with the tribes. “Respecting and honoring tribal cultures and traditions is paramount,” she said during the press conference. “That’s why there is a consultation process. We are in the process of making sure every federal land management agency understands that as we look to the future.”

In contrast to the Blackfeet, the Standing Rock Sioux face a much different reality. Despite the Army Corps of Engineers’ recent decision to deny the Dakota Access pipeline its final permit to cross the Missouri River and reopen the environmental review process, the Trump administration has not only promised to promote fossil fuel development, but also has explicitly supported the completion of the pipeline. With the pipeline’s main proponent, Energy Transfer Partners, in which Trump reportedly holds investments, refusing to relent, the water protectors’ temporary victory may very well turn into an uphill battle once again.

And even with their recent good news, the Blackfeet will have to stay vigilant. The Mountain States Legal Foundation has called the basis of the Interior Department’s decision to cancel its lease “absolute nonsense.” The foundation is challenging the move in federal court and has said it will request that the incoming administration reinstate the lease.

Whatever decision the courts and the incoming administration may hand down, Tatsey’s commitment will endure. For him and the Blackfeet, the obligation they feel toward the Badger cannot be thwarted. “Our identity comes from the land,” says Tatsey. “We have a responsibility.”

How Standing Rock Has Changed Us

Winona LaDuke on the Dakota Access Pipeline: What Would Sitting Bull Do?