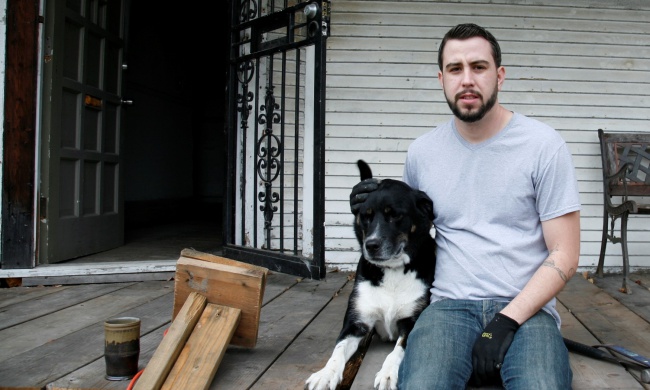 Drew Philp on the porch of his $500 house in Detroit. Photo by Garrett MacLean.

A young white man moved into a black neighborhood to fix a crumbling house and discovered what really transcends differences.
By Colin Beavan
4 MIN READ

How can a young white man with no faith in politics find a path to meaningfully assist in the struggle for race and class justice and also in the healing of what divides the people of these United States? In many ways, that is the subject of Drew Philp’s memoir about being a white millennial who dedicates his life to buying, fixing up, and living in a derelict house in a poor, black neighborhood in soon-to-be bankrupt Detroit.

The most poignant scene from A $500 House In Detroit begins when a neighbor and friend of Philp’s pulls up in a pickup truck and asks him to hop in. “The Terrys’ house is going to be up for auction,” says his friend Woods, another white guy, but one who has the bona fides of having moved to the neighborhood 20 years or so earlier.

The Terrys are black neighbors who live behind Philp. Mrs. Terry is one of the first in the neighborhood to extend the hand of friendship to Philp. Now, Woods tells Philp, her elderly husband has dementia and, without her knowing, fell behind on mortgage payments. Mrs. Terry doesn’t even know her family’s house is about to be sold by the bank (1 in 4 homes in Detroit have been subject to foreclosure).

There, in the cab of the pickup truck, Philp asks, “When are you going to tell her?” Readers are left wondering for a moment if Philp might simply shrug away his neighbor’s problem.

1 in 4 homes in Detroit have been subject to foreclosure.

Woods replies, “I wanted to talk to you first. I have an idea. You have any money?” Woods is softening the ground to put Philp’s sincerity to the test. Is Philp just rebuilding a house or is he really a committed part of the community of people hoping to rebuild and heal Detroit? Because if it’s the latter, shrugging away a neighbor’s troubles isn’t an option.

The friendship between Philp and the grandmotherly Mrs. Terry, whose family has lived in the neighborhood for generations, is an important theme in Philp’s story. The relationship began when Mrs. Terry, after watching Philp sweat over his rebuilding efforts, waved him over and offered him a bottle of cold Gatorade. She invites Philp to a family barbecue, but he doesn’t go because he is sheepish about the perception of him as a white intruder in a black neighborhood, and she dresses him down for not coming. In a way, she becomes his neighborhood welcoming committee, and Philp soon becomes the only white person at her family gatherings.

Up until Philp learns about the foreclosure, his relationship with Mrs. Terry is simply a heartwarming story of the slow breaking-down of interpersonal obstacles of race and class between neighbors. Now, however, the question for Philp becomes whether he is really a neighbor in the “treat your neighbor as yourself” sense of the word or is just a white, liberal, do-gooder (more or less) poverty tourist?

To make the quandary worse, Philp is pretty cash-poor himself. He lives in the abandoned house he bought for $500. It was filled with squatters’ trash when he moved in, and, for a couple of years, he has survived without heat and running water as he worked odd jobs to make the money he needed to fix up the house.

What was he doing there? To be part of “the seed of something brand-new and revolutionary for urban areas,” he writes. He reminds us of the decimation of Detroit, the loss of its democracy to state-appointed administrators, the draining away of its wealth from black residents and straight to white bankers.

Philp writes about how millennials had had their victory in the election of their man—Obama—“and he had let us down” (because, Philp writes, no one on the planet could undo what we had collectively done over the decades). “Politics wasn’t going to fix things any longer. We’d have to do it ourselves.”

There is potential for all of us to meaningfully transform ourselves.

There are, of course, many books by black writers that are much more important and deserving of attention when it comes to the stories of lifting up black communities. But I don’t think that’s what Philp’s book is about. It is about a white man trying to find a useful place in the interracial and inter-class and inter-ethnic and inter-gender and inter-sexuality struggle for justice, equity, and—yes—love.

It is the suggestion that there is potential for all of us to meaningfully transform ourselves that makes the moment of Woods pulling up to Philp’s house and challenging him to forget about using his meager savings to fix his house and instead to use them to help Mrs. Terry so moving.

I won’t spoil the ending for you. But I will tell you the why of what happens. What Philp does isn’t because Philp is an idealistic young white guy who wants to work off his privilege-shame by helping black people. It is because after all those unheated winter days and all that work and all those barbecues and all that navigating of difference and finding of commonality, Philp and Mrs. Terry had become friends.

Philp’s book gives us a glimpse of a world saved not by trying to do the right thing. But of doing the right thing because we have worked to transcend our differences and to know and care for each other across all the lines—including the lines between our backyards. It isn’t the whole solution, surely, but I know it is part of it.

For Women Like Charleena Lyles, Trauma Has Trickled Down for Generations

Why Philly’s New Pride Flag Has Black and Brown Stripes