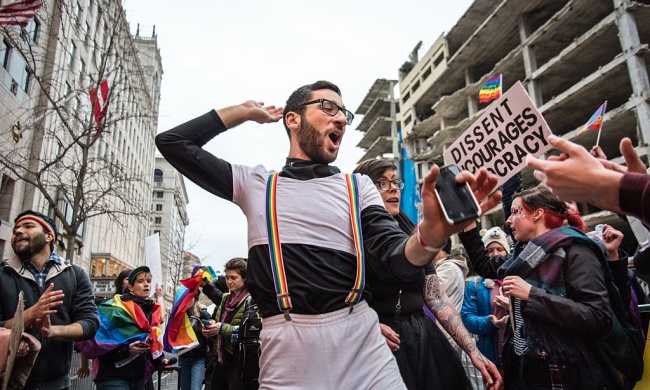 Dance is both a way to reclaim public space and a way to let go. Firas Nasr, 23, who is affiliated with the group Werk for Peace, gets his groove on at a dance party that blocked the 13th Street checkpoint to Freedom Plaza on the day of Donald Trump’s inauguration.

Photo by Andre Chung for The Washington Post/Getty Images.

Where fascism aims to instill fear, joy is the perfect resistance.
By Janey Stephenson
5 MIN READ

When you hear the words “anti-fascist rally,” what do you visualize? An angry crowd with placards, old hippies holding banners with clichés about love, or maybe those rowdy anarchists in black balaclavas?

What about young women and non-binary people gleefully dancing to grime music  that’s blasting out of portable speakers? Well, that’s precisely what a  recent anti-fascist rally in south London looked like. It’s a perfect example of how collective joy can become powerfully subversive.

When the far-right “pro-British”  South East  Alliance  came to Croydon in south London to hold an “anti-immigrant, anti-Islam” rally, they were interrupted with an unexpected weapon: joy. A big crowd of young activists, predominantly from direct action groups like  Sisters Uncut  and  Black Lives  Matter UK,  danced joyfully right in front of them, guarded by a line of police. It might seem like an unexpected tactic, but logically it makes perfect sense, both to the individuals involved and to the political goals of these groups.

Where fascism aims to instill fear, joy is the perfect resistance. To laugh in the face of fear is possibly the bravest act, which is why  Saffiyah Khan  became an instant hero in the UK when she smiled at fascist thugs from the far-right, racist movement  English Defence League—who began harassing Muslim women in her hometown. Two core tenets of fascism are fierce racism and rampant sexism, and with that in mind, anti-fascist resistance doesn’t get more powerful than women and non-binary people of color collectively, loudly, and happily dancing together in the streets.

Dance as protest is not unique to Croydon. In April, LGBTQ activists in the United States held a  queer dance party  outside Vice President Mike Pence’s home to protest his homophobic policy positions. The global One Billion Rising movement, which aims to end violence against women, is centered on  women dancing together  on the same day in countries throughout the world. Sisters Uncut are renowned for collective dancing at their demonstrations against cuts to domestic violence services proposed or enacted by the UK government.

Their spontaneous, collective dancing  is described by activist Sur Este as “a fuck you to the powers that be.” She says that dance is both a way to reclaim public space and a way to let go: “When I dance surrounded by cops, or fascists, or when I am trying to make a point about something horrible that is happening, I feel powerful. … We are still here and we are still dancing.”

Dance is both a way to reclaim public space and a way to let go.

Naatasha Mumbi, who also attended the Croydon protest, recalls the inspirational  student protests that took place in South Africa  in 2016 as part of the “Rhodes Must Fall” movement:

“The front lines were bringing full-on coordinated dance moves, and what a disarming and radical act it was in the face of state violence. It made my heart pound. Facing up to fascists with the full force of bangin’ grime beats, and putting our bodies on the line together in rhythm, is how I channeled what I saw from South African protests.”

Liberation movements have a long history of communal dance. The writer Barbara Ehrenreich has documented the history of collective joy in her book Dancing in the Streets. She argues that collective and ecstatic dancing is a nearly universal “biotechnology” for binding groups together. Physical movement—a powerful escalation of typical protest chanting—not only releases emotion, it also creates bonding, trust, and equality, dissolving hierarchy and increasing a sense of community.

What’s more, it’s actually essential to our survival. Our species, Homo sapiens, has outlived all other human species because of our ability to coordinate with others in groups. Historically, groups who could hold themselves together through dance and other methods would have enjoyed an advantage over more weakly bonded groups.

It’s actually essential to our survival.

In his book The Righteous Mind, social psychologist Jonathan Haidt describes the innate craving that people have to belong to a greater whole: to “transcend self-interest and lose ourselves (temporarily and ecstatically) in something larger than ourselves.” Haidt calls the ability to do this the “hive switch,” which makes groups more cohesive and more successful in relation to others.

This switch can be activated at football matches and raves, through the use of hallucinogens like LSD, and even in choral singing or military drills. It has its roots in biology, since all of these activities release the “hug hormone” oxytocin  which promotes social bonding. On an undeniably physical level, collective dancing has the power to generate a deep sense of elation, but at what point does collective joy become subversive?

Within the context of capitalism, collective joy through dancing and other forms of expression is already subversive. Back in 1905, the German sociologist Max Weber warned of an “unprecedented inner loneliness of the single individual” that accompanied the “spirit” of modern capitalism. In a capitalist society founded on competition, privatization, and small family units, collective joy—as opposed to individual happiness—signals both personal resilience and political rebellion. The very act of relishing in a shared connection is a triumph in a society that seeks to divide us.

The subversive power of collective joy is maximized when it occurs in public, politicized spaces as an affirmation of collective identity. Joy can score cultural and political goals in the name of liberation because it simultaneously serves an individual and a broader, political purpose. Many group activities are carried out in the pursuit of hedonist escapism or in order to forget ourselves. However, when collective joy erupts in pursuit of defiantly reinforcing your very existence—especially in the face of those who seek to erase you—it has the power to subvert authority and release suppressed rage while connecting us to each other and reinforcing a sense of group safety.

There’s no better example of this process in action than  Dabke dancing. Dabke is the traditional folkloric dance of Palestine, supposedly originating as a fertility rite where people stamped their feet on the ground. It is most commonly danced at wedding celebrations, but it can also be found in  flash mobs  on the streets of Gaza, as well as in BDS protests in New York.

Saeed Suliman, a Dabke teacher from the West Bank, told me that Dabke dancing is an “important weapon in the cultural resistance of Palestinians.” He continued:

“After the Zionists stole our land and named it Israel, our national identity was no longer recognized. We only had Palestinian culture to identify ourselves by, and Dabke dancing shows our roots to the land that has been stolen from us. Dabke is a way to fight against our extermination by reinforcing our identity, energy, and pride as a people.”

Right now we face a hostile world order that’s rapidly shifting to the right. The U.K. and the United States, supposedly bastions of democracy, both have leaders who ran for election with pledges to remove human rights and  build walls, and who  aggressively scapegoat migrants and valorize the military. Bearing in mind the  14 characteristics of fascism established by political scientist Lawrence Britt, these measures signal that there are even bigger battles to come.

The fight-back need not be joyless.

But the fight-back need not be joyless. Holding on to and centering joy is a vital tactic for personal and group resilience, as well as political resistance to an agenda that seeks to enforce hierarchy and division through mass fear. Authoritarianism is directly incompatible with collective joy; it demands fear, obedience, hierarchy, and an obsession with security and preparation for war. The unexpected, spontaneous, and pleasantly disruptive nature of collective joy takes people off guard and is one of the great equalizers of social and political struggle.

“If I can’t dance, I don’t want to be in your revolution” Emma Goldman, the Russian feminist anarchist, once famously  said. We’d do well to take her words literally. Movement builds movements.

This article was originally published by Open Democracy. It has been edited for YES! Magazine.

A Manual for the New Era of Activist