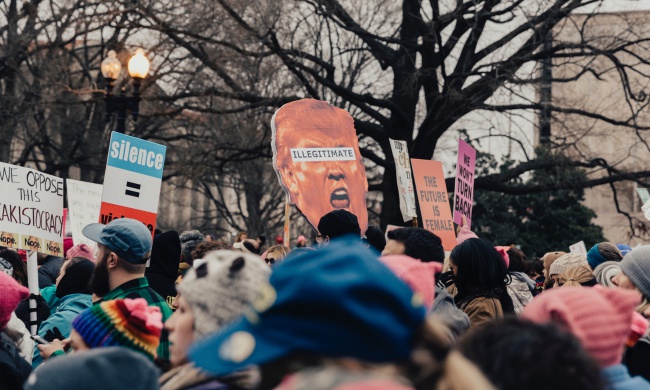 The biggest threat to democracy may be not that we are insufficiently attuned to our fellow citizens, but that we’re almost too social.

We need more than good-heartedness to save our democracy. We need the courage to act on it.
By Adam Eichen &
Frances Moore Lappé
4 MIN READ

On what human strengths does democracy depend? It’s a huge question and an urgent one, as many Americans fear their democracy is in free fall.

Sensitivity to fairness is critical to democracy.

Fortunately, in digging for answers, our constitution itself offers a useful starting point. The Preamble establishes the republic’s commitment to “promote the general Welfare,” which is possible only so long as citizens grasp that their well-being is tied to the well-being of others and also act on this awareness. Arguably, the effectiveness of their action would depend on key civic virtues, especially cooperation and fairness.

Trouble is, in today’s nasty, polarized political culture, these strengths can seem like a huge stretch. But maybe not.

During almost all of human evolution, we lived in tightly knit tribes and became the most social of primates. Our superior social skills, anthropologist Sarah Blaffer Hrdy theorizes, arose from our long period as hunter-gatherers during which humans—unlike Great Apes—depended on each other to care for our offspring, requiring cooperation and the utmost trust.

Cooperation was key not only to successful early-human child-rearing but also in hunting and gathering for our sustenance. In the process, we developed the capacity for “shared intentionality” lacking in other primates. Developmental psychologist Michael Tomasello describes “shared intentionality” as Homo sapiens’ unique capacity to set and carry out goals together, which seem essential to the democratic process.

Sensitivity to fairness also is critical to democracy, and here, too, our innate capacities run deep. Early on in our evolution as a species, we likely grasped that our own survival depended on the preservation of the tribe, and that unfairness could rip people apart. Even Adam Smith, whose Wealth of Nations is used to justify self-interest, noted that we are “in a peculiar manner tied, bound, and obliged, to the observation of justice.”

Of course, we humans vary widely in our enthusiasm for expressing these civic virtues—and they depend on active cultivation. But they do not run contrary to our nature. They are our nature.

So, with all this going for us, why isn’t it easier for humans to continue moving democracy forward? It is, after all, a never-ending journey.

One answer lies in an ironic twist.

The biggest threat to democracy may be not that we are insufficiently attuned to our fellow citizens, but that we’re almost too social. Our need for others’ approval can be overpowering. In fact, belonging is so important for most of us that it’s frightening to break with our tribe. Our need to fit in is so strong that in the infamous 1950s conformity experiments by Solomon Asch, most subjects went along with the group’s opinion, denying what their own eyes were telling them. Even on a trivial matter, presumably fear of being different and risking rejection triumphed.

We need to seek every opportunity to turn public attention to the very real common interests among most Americans.

Herein lies the edgy lesson for democracy. While capacity for cooperation and sensibility to fairness come fairly easily for most of us, another essential civic virtue requires more. In our current moment of extreme breakdown in common decency—brought on by a money-dominated political system and a brutal form of capitalism generating widespread distrust and fear—another essential virtue is calling out for attention: courage.

When, in August 2017, many in Charlottesville stood up in unity against racism and anti-Semitism, supported later by tens of thousands gathered in Boston, that was courage. When one student confronts friends taunting an “unpopular” classmate, that is courage. When a worker or public official blows the whistle on unethical practices, that is courage. When dozens of state leaders refuse to submit private voter information to Kris Kobach’s Presidential Advisory Commission on Election Integrity, knowing it would be used to suppress voting, that is courage. When athletes kneel during the national anthem to protest the betrayal of our nation’s commitment to justice, that is courage. And when any of us steps out in public to focus attention on the anti-democratic practices compromising American elections, that is courage.

All such actions orient us toward the common good, our nation’s founding promise.

They demonstrate what we call “civil courage,” a learned art on which all other civic virtues depend, and one that’s never been more needed.

Before the 2016 presidential election, the Electoral Integrity Project, an academic project based at Harvard University and the University of Sydney, ranked the U.S. last among western democracies and 52nd among 153 countries in its “perceptions of electoral integrity” index. Now, President Trump sets us back further, as he flouts social decency, political norms, and arguably the Constitution itself, undermining trust in government and degrading civic life.

So, while we evolved in egalitarian tribes that kept the domineering in check using counter dominance strategies —from ridicule to shunning—we now need to actively revive and hone this essential capacity in our species.

And in the process, we can recognize that once demagogues divide a people, as Trump has done so effectively, such strategies require nuance, because even some of those who have been damaged materially will still cling to a demagogue for protection. Courage demands standing up to the bully in the White House without disdain for those whose fear and anger make them blind to the demagogue’s harm, even as they are the victims of it.

At the same time, we need to seek every opportunity to turn public attention to the very real common interests among most Americans. A stunning 85 percent of us, for example, agree that the “political money system needs fundamental changes or a complete rebuild.”

Goodness without courageous action is not good enough.

Democracy depends on actively cultivating courage, confident that it is highly contagious. The Asch experiment found, for example, that even one truth-teller frees others to stay true to themselves. Our fellow Americans who are joining now with friends and strangers alike to take a public stand, many for the first time, are demonstrating and spreading courage.

In this ferment, what we’re calling a new Democracy Movement—new in our lifetimes—is emerging focused not on a single issue but on the norms and rules that democracy itself demands, challenging racist divisions, money-driven politics, voter suppression, and more.

Courage grows only as we do what before we’d believed we could not, and are willing, as needed, to break from our “tribe.” Certainly, our hearts will pound wildly in these moments. But instead of signaling weakness, why not choose to recognize that sensation as “inner applause” cheering us on to fulfill the republic’s promise?

Despite Setbacks, the Democracy Movement Is Gaining Power

The High Cost of Free Speech on College Campuses