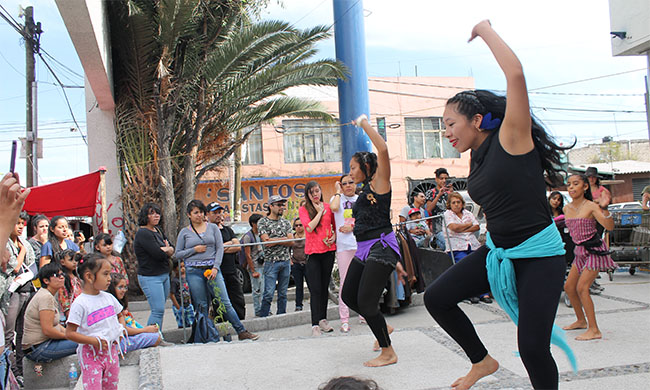 Dancers perform at El BANCO during a free fair.

The unique gathering space acts as a counterbalance to decades of government mismanagement and neglect in this sprawling suburb northeast of Mexico City.
By Martha Pskowski
6 MIN READ

It’s a cool Sunday afternoon in Ecatepec, Mexico, and a crowd is forming along the sidewalk. A slow drumbeat rises above the sound of honking taxis and chatter as four dancers step out and begin moving to the rhythm of an African beat.

Up and down nearby streets, small businesses selling everything from stationery to carnitas, or pork tacos, are interspersed with shuttered storefronts and abandoned businesses. At night, store owners pull down heavy metal curtains to keep out intruders.

The dancers are part of a free fair at El BANCO—or “The Bank” in Spanish—a unique and vibrant community hub sprouting up amid suburban blight. In this sprawling municipality northeast of Mexico City, neighborhood friends are turning abandoned commercial space—long forgotten by businesses and politicians—into a gathering spot for families and young people.

The bustling center acts as a counterbalance to the wave of murders, robberies and disappearances that have become all too common here. All around them, decades of government mismanagement and neglect are evident: poor roads, insufficient trash and water services, accusations of police corruption. Crime is common here and parents worry about their children going out at night.

“Our idea was to recuperate spaces that have been forgotten and abandoned.”

Jacqueline Celestino Ortega, 25, one of the El BANCO organizers, said the group wanted to provide a space where families and children can feel safe while engaging in cultural activities. “Our idea was to recuperate spaces that have been forgotten and abandoned,” she said.

She lives just a few blocks away and ticks off other vacant properties in the neighborhood—a pharmacy, another bank, a car dealership. Businesses have fled Ecatepec in response to the high levels of violent crime. The Bancomer National Bank branch that used to occupy the BANCO building closed in 2013. In the absence of an effective local police force, the remaining businesses invest in private security, with armed guards posted outside pawn shops, supermarkets, and electronics stores. Not so at El BANCO. Its doors remain open all day—to everyone.

The neighborhood friends had been organizing an annual cultural festival in a nearby park for years when they walked by the empty building one day in 2015 and started thinking they could use it for an upcoming festival.

Little by little, they began cleaning up the space. They pulled out mountains of trash, swept up piles of broken glass, and fashioning a gate at the entrance to the space. No one—not the government, building owners, or police—has objected. “We started having movie projections,” during the cleanup work, she said. “People would come to watch the projections while the other half of the space was still filled with trash.”

In two years, they have decorated the cavernous central hall with collages and graffiti. Where there were once tellers’ windows, there’s now a stage. An urban garden grows on the roof, filled with endemic species such as palo dulce (Kidneywood), mesquite and cempasuchil, one of the traditional flowers used on Day of the Dead.

Planting flowers or edible plants around the neighborhood is part of their mission. The members hand out small succulent plants at free fairs and encouraged attendees to transplant them on a median, along a sidewalk or in another public place.

Jacqueline Celestino Ortiz on the roof of El BANCO.

The rooftop garden has an expansive view out across Ecatepec, across endless rows of concrete houses. Shopping malls dot the horizon, and green spaces are few. The collective’s vision goes beyond the walls of El BANCO, and out into the neighborhood. In the future, they want Ecatepec to mean something different all together.

The four friends who began the collective two years ago now number 10. “More people kept joining,” Ortega says, sitting in the dappled afternoon sunlight that fills the central room of El BANCO. “And they began sharing their own skills and knowledge.”

All are from the Ecatepec, which developed as part of Mexico City’s eastern sprawl. While the first planned suburbs of Mexico’s capital city were built to the West, development in the East was haphazard. Families built their homes and the roads leading to them with little oversight, and the government arrived later to install utilities and other services.

El BANCO helps local young people understand their identity in a place that has transformed in a few generations from rural to densely urban. And it provides an important after-school or summertime outlet for children whose families are discouraged from using the local parks because of crime. Malls are often the only option for families to get out of the house.

“The idea of having this space, and making art here, is part of a process to understand our roots, and create a local identity,” Ortega says. “Growing up here, everything interesting, and all the cultural offerings, were always in Mexico City. You felt marginal being out here.”

Two neighborhood kids stand on the roof of El BANCO.

Ortega said she hopes El BANCO can help youth who might not thrive in a school setting find their passions. For her, a photography workshop as a teen sparked her creative interest, and she later earned an undergraduate degree in design.

“If you see other options outside of school—in the arts, or music, or alternative medicine—that help you find your talent,” she says. “And if you don’t have those opportunities nearby, you might never realize it.”

The collective members, most in their 20s or early 30s, also want to inspire local youth to take initiative in the neighborhood. On a fall afternoon, a 10-year-old is teaching a friend how to rollerblade, under Ortega’s watchful eye. The smooth concrete floor of the bank is the perfect stage for his tricks on wheels. He attended El BANCO’s summer camp and now comes by everyday after school.

Activities as simple as drawing can help children process the volatile atmosphere they live in.

Eduardo Brun, 26, another El BANCO member, said working with the collective has allowed him to reconnect with his neighborhood after years seeking out educational and cultural opportunities in Mexico City and elsewhere. After high school, he studied natural construction, alternative medicine, and yoga, and now practices those skills in Ecatepec.

El BANCO has maintained a distance from party politics. During the state governor’s race last year, right-wing candidate Josefina Vázquez Mota held an impromptu campaign rally on the sidewalk in front of El BANCO, perhaps because of the lack of public spaces in the neighborhood. El BANCO denounced the use of its space on its Facebook page.

Residents and local youth feel betrayed by politicians and feel as if their neighborhood has been abandoned by all sides. In recent years, femicide, the gender-based murder of women, has become the most urgent problem facing the municipality. San Agustín, where El BANCO is located, is one of five neighborhoods in Ecatepec where state telephone union members said they would not work unless accompanied by a police escort.

The BANCO collective held a protest after the slaying of a young woman in the nearby state of Puebla in September. They have hosted self-defense workshops for women to address the problem locally.

“We don’t want to make women even more scared, we don’t think that’s the solution,” Ortega says. “We prefer to counsel them, so they can be alert in case a situation arises. We talk about how to stay alert, or how to de-escalate.”

Brun adds that their workshops with children they emphasize non-violence and tolerance. With a lack of local after-school options for youth, activities at El BANCO create structure for those who might otherwise be pulled towards crime, the members say.

Activities as simple as drawing can help children process the volatile atmosphere they live in. “We believe that a different future is possible,” he says. “We want to educate kids that violence isn’t the solution to problems.”

It Was a Blighted City Block. But This Woman Is Turning It Into a Solar-Powered Ecovillage