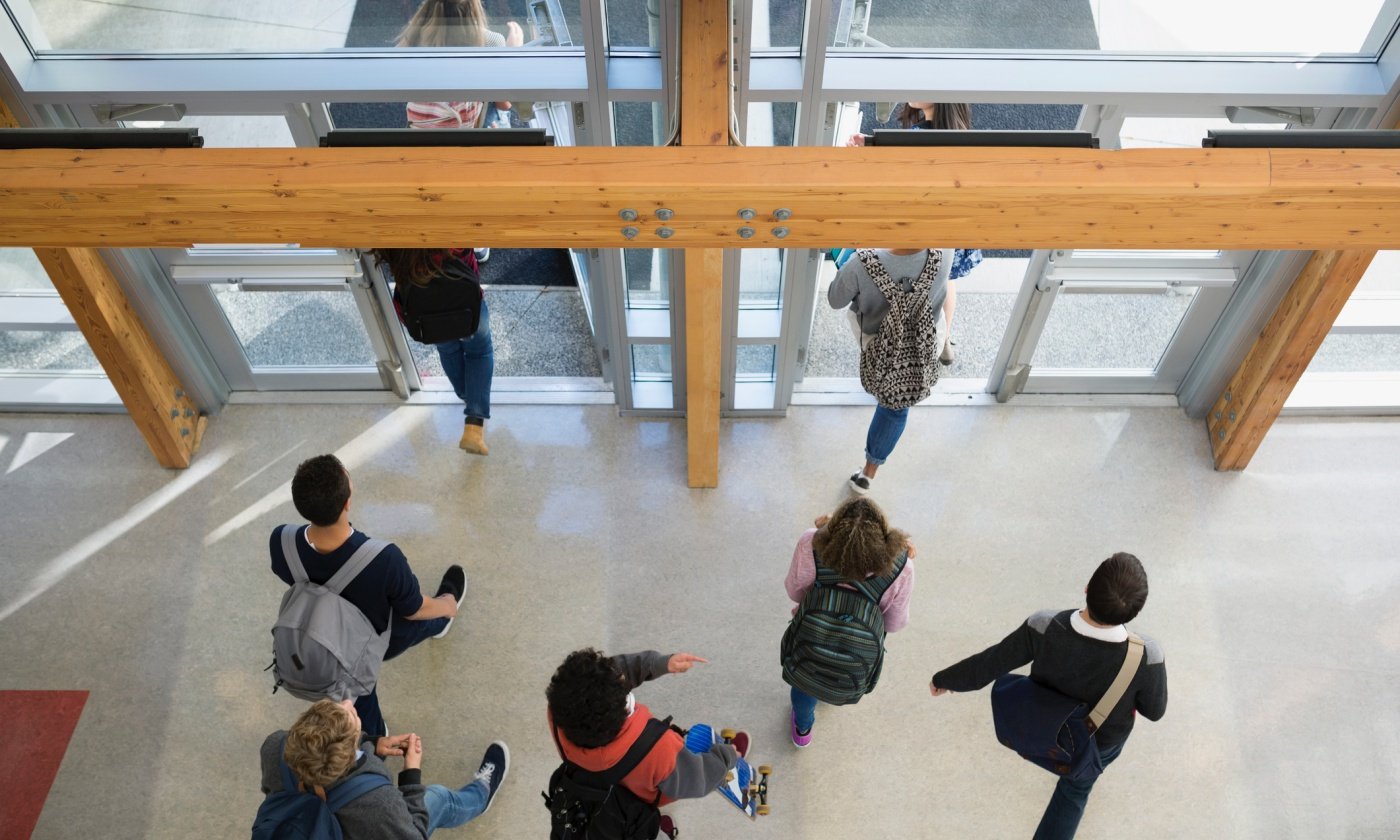 This pipeline is the phenomenon in which schools’ zero-tolerance policies have been found to disproportionately affect children of color and increase the likelihood of them being incarcerated.

Inspired by Ava DuVernay’s documentary ‘13th,’ and their own experiences, four female judges mentor youth to keep them out of the criminal justice system.
By J. Gabriel Ware
5 MIN READ

One hundred teenagers pack into a courtroom at a Dallas, Texas District Court. But the teens aren’t in legal trouble. They are participating in an after-school program aimed at keeping them out of the criminal justice system.

Some reluctant teens are unengaged, fiddling with their cellphones. One distracted student suspects his girlfriend is flirting with a guy in another group. He charges across the courtroom. “I’m going to kill you,” he yells before he puts her in a headlock. The bailiff intervenes, catching a punch to the face. The students watch transfixed as a fierce scuffle ensues between the bailiff and the teen before eventually the disruptive student is arrested and taken away.

“He just racked up four or five charges in a manner of seconds,” Judge Stephanie Mitchell announces. “It really happens that fast in real life.”

The students find out the courtroom brawl was an act, an opening-day skit carried out by the bailiff and two local actors. The skit was created by Mitchell and three other judges, Amber Givens-Davis, Lisa Green, and Shequitta Kelly to kick off this four-month-long youth mentoring program, Pipeline to Possibilities.

The judges in partnership with the Dallas Independent School District and local churches are giving middle and high school students living in neighborhoods with high incarceration rates a different view of the criminal justice system with the goal of breaking the school-to-prison pipeline.

This pipeline is the phenomenon in which schools’ zero-tolerance policies have been found to disproportionately affect children of color and increase the likelihood of them being incarcerated. In 2005, The Public Policy Research Institute at Texas A&M University concluded that Black and Hispanic males with a history of disciplinary involvement at school were most at risk of being incarcerated.

Most of the students recruited for Pipeline to Possibilities live or attend schools in South Dallas, a low-income section where residents are overrepresented in state prisons. In 2013, Stand for Children, a national nonprofit, found that the largest number of Texas prison inmates from Dallas County contained more than 3,100 prisoners from 10 ZIP codes—all except one of those ZIP codes are in South Dallas.

“I know 20 to 30 people who were either suspended or sent to an alternative school during my four years in high school,” Johnson says, who participated in the Possibilities program. “I know that [the school-to-prison pipeline] exists, but it’s also a two-way street.” The schools can’t be completely responsible for disciplining the students, she says.

Johnson’s mentor, Bernadette Nutall, a former representative of the Dallas Independent School District school board, says students have a lot of temptations to go down the wrong path, including poverty, crime, peer pressure and lack of resources and support at home and at school.

“Our students are smart, but they lack opportunity,” Nutall says. “And one little dumb mistake can cost you your whole life.”

The school-to-prison pipeline can start as early as preschool, stemming from teachers’ biased attitudes, according to a 2016 Yale University study. The study found that preschool teachers expect their Black students, especially Black boys, to misbehave more so than their White students. That same year, the U.S. Department of Education Office of Civil Rights reported that, from kindergarten through 12th grade, Black students are almost four times more likely to be suspended than White students.

Last year, legislation passed in Texas that bans public schools from suspending third graders or younger—with some exceptions for violent behavior, bringing a weapon onto school property or dealing drugs or alcohol.

Criminal justice is not the only focus of the program. The judges discuss making healthy life choices and maintaining a positive image.

But in the higher grades, Judges Mitchell, Givens-Davis, Green, and Kelly, who preside over a mix of misdemeanor and felony cases, have their work cut out for them.

Each was frustrated with the revolving door of young offenders in and out of their courtrooms. But the 2016 documentary 13th, which explores racial inequality and the mass incarceration of Black people, inspired them to create a prevention program instead of addressing the problem in their courtrooms case by case.

“Knowledge is power, and maybe if they knew more about the criminal justice system, they wouldn’t find themselves on that side of the bench,” Givens-Davis says. “Maybe they would be on the bench as a judge or an attorney in the courtroom or a probation officer or a sheriff’s officer.”

The judges wanted to create a program that would help youth navigate the roadblocks they similarly faced growing up. For Judge Kelly, whose father was killed when she was young, those barriers were compounded. She grew up with limited resources, and her family struggled with a history of substance abuse. She eventually became a teen mother.

“I got pregnant when I was a teen, and felt like a lot of people in society had turned their back on me,” Kelly says. “So, I decided long ago that whenever I get in the position where I can give back and help pave the way, I would do that.”

Pipeline to Possibilities launched in the winter 2017. Each season begins with a new cohort and coincides with the start of the school semester. The judges fund the program with their own money, including the provision of workbooks and supplemental materials. They meet with the students once a month over the course of four months.

The curriculum typically builds from the opening skit. Students are asked to name all the possible crimes committed by the jealous boyfriend: terroristic threats, assault, assault on a public official and resisting arrest. They are shown every step of the criminal justice process from arraignment and bail hearing to a mock trial where the students deliberate as jurors and decide the jealous boyfriend’s fate.

The best part for Givens-Davis is watching the students weigh the options of the “case.”

“We would throw in a few unrelated charges to see if they are paying attention,” she says. “And I’m wowed when I see them point out those irrelevant charges and cite penal codes and say, ‘Those charges don’t apply to this case.’”

But the decision was easy for Johnson.

“He choked his girlfriend, punched the bailiff—it was nothing I could do for him—Guilty,” she said.

Criminal justice is not the only focus of the program. The judges discuss making healthy life choices and maintaining a positive image with the students. They bring in professionals to talk with them about their health, their appearance, and about appropriate social media behavior. Johnson says that session was her favorite because she watched many of her male friends learn how to tie a tie for the first time.

The program ends with a college fair and celebration, which the judges call College Explosion.

Jamila Thomas, director of Dallas Independent School District’s Racial Equity Office, has been working with the judges since the project’s conception in 2016. Now Thomas and her team are prepping to research the success of the program.

“The program is still relatively new, so we can’t measure the success of [it] right now, like if these students would be less likely to go through the criminal justice system or if the program would drop the recidivism rate,” Thomas says. “But anecdotally, the information the students are receiving goes a long way.”

Johnson is now in her first semester at Clark Atlanta University, and though she considered going into criminal justice after going through Pipeline to Possibilities, she decided to stick with her first choice, Mass Media Arts. But she’s thankful for the judges.

“I think it’s amazing that [the judges] are coming into the schools,  Johnson says. “Like I said, it’s a two-way street, but no one [else] is really coming in to figure out what’s really going on in the schools—why aren’t they graduating as many kids as they should be and what is happening to [them] after high school.”

Beginning the 2018-19 school year, the program will be extended to six months. The judges are planning for an eventual expansion into a national nonprofit.

How to Help Inmates Heal After the Trauma of Prison