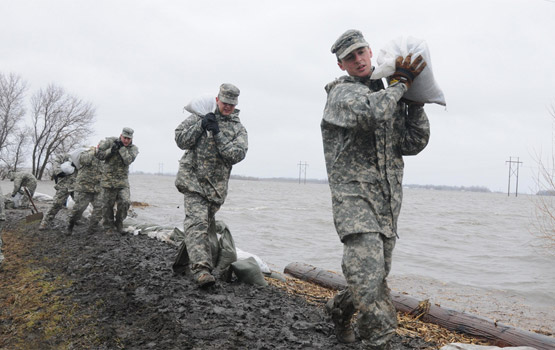 Members of the Coast Guard help construct a flood barrier in North Dakota. Photo by DVIDSHUB.

If we the people want the sort of security in emergencies that is available to the owners of Wall Street banks, we need to own some banks ourselves.
By Ellen Brown
6 MIN READ

Most people believe that they’ll be covered by their insurance policies or by the Federal Emergency Management Agency (FEMA), if a disaster hits their region. But many victims of Hurricane Sandy have found that their insurance policies included obscure provisions that excluded coverage, and the only aid that FEMA gives to individuals is the opportunity to take on more debt.

A demonstrated solution exists to this problem, in the form of state-owned banks like the one that exists in North Dakota. As climate change makes disasters like Hurricane Sandy more common in many parts of the United States, the fight to establish state banks in new places will become ever more urgent.

The focus on lending moves money from the victims of disaster into the hands of loan servicers, who make enormous profits off these loans.

In the coastal regions of New Jersey, New York, and Connecticut that got slammed by Sandy, homeowners were already strained by underwater mortgages prior to the storm. Many properties have now depreciated to the point of having no market value at all.

They have no choice but to try to rebuild, but how can they take on more debt? FEMA’s focus on lending moves money from the victims of disaster into the hands of loan servicers, who make enormous profits off these loans.

Those were the conclusions of a report by Strike Debt, an offshoot of Occupy Wall Street. The report was based on observations made at a community meeting in Midland Beach, Staten Island, on November 18, 2012, as well as on interviews with FEMA and Small Business Association (SBA) representatives, volunteer workers, local business owners, and residents throughout New York City. Among other findings of the report were that:

According to Strike Debt’s report, the vast majority of FEMA’s resources and efforts are spent on public assistance programs that provide infrastructure restoration. Individual victims of disaster are mostly offered personal loans to help them “get back on their feet.” Although these loans might seem good on the surface, they ultimately make long-term financial burden the precondition for “recovery.”

Disaster victims are now being expected to shoulder relief expenses that used to be shared publicly. It is a failing of our austerity-strapped federal disaster relief system that it offers little real help to individuals; and it is a failing of our private, for-profit insurance system that the legal duty of management is to extort as much money as possible from customers while returning as little as possible to them, in order to maximize shareholder profits.

There are three main sources of financial support being offered to Sandy victims: insurance, grants, and loans. Federal support is available only once private insurance has been exhausted.

In many cases, residents who believed they had insurance that would cover the Sandy disaster are finding out that, for a variety of reasons involving the fine print in the policies, their claims are being denied. Difficult-to-understand clauses allow insurers to deny coverage depending on such things as whether the storm was officially classified as a hurricane or a tropical storm.

Favorable interest rates are available from FEMA only if the applicant cannot get credit elsewhere.

Except for temporary living costs, FEMA program grants are accessible only after the homeowner, renter or business applies for a loan. If the applicant qualifies for a loan, he or she is not likely to be provided further FEMA aid. Disaster loans are made through FEMA on the basis of credit history, and favorable interest rates are available only if the applicant cannot get credit elsewhere. That means favorable interest rates are offered only if an applicant cannot qualify for credit through a commercial bank.

There is no FEMA money for small businesses other than SBA loans, and businesses have difficulty taking on debt when they don’t know when they will be able to reopen. The SBA application is reported to be at least 30 pages long, and is often difficult to complete because flooding has destroyed much of the required paperwork.

Except for temporary living costs, FEMA grants are accessible only after the homeowner, renter or business applies for an SBA loan.  If the applicant qualifies for a loan, he or she is not likely to be offered further FEMA aid. Disaster loans are made on the basis of credit history, and favorable interest rates are available only if the applicant does not have “credit available elsewhere.” That means favorable interest rates are offered only if an applicant cannot qualify for credit through a commercial bank.

Compare this to the disaster relief available in North Dakota, the only state in the union to have a state-owned bank. The Bank of North Dakota (BND) has a mandate to serve the public interest, and it has no shareholders other than the state itself. This gives it wide-reaching flexibility in emergencies, allowing it to act quickly to catalyze and coordinate resources.

The BND’s emergency capabilities were demonstrated in 1997, when record flooding and fires devastated Grand Forks, N.D. The town and its sister city, East Grand Forks, which is on the Minnesota side of the river, lay in ruins. Floodwaters covered virtually the entire city and took weeks to fully recede. Property losses topped $3.5 billion.

The response of the state-owned bank was immediate and comprehensive, demonstrating a financial flexibility and public generosity that no privately owned bank could match. Soon after the floodwaters swept through Grand Forks, the BND was helping families and businesses recover. Led by then-president and CEO John Hoeven—who went on to become the governor of North Dakota and a U.S. senator—the bank quickly established nearly $70 million in credit lines to the city, the state National Guard, the state Division of Emergency Management, the University of North Dakota in Grand Forks, and for individuals, businesses, and farms. It also launched a Grand Forks disaster relief loan program and allocated $5 million to help other areas affected by the floods. Local financial institutions matched these funds, making a total of more than $70 million available.

Besides property damage, flooding swept away many jobs, leaving families without livelihoods. The BND coordinated with the U.S. Department of Education to ensure forbearance on student loans; worked closely with the Federal Housing Administration and Veterans Administration to gain forbearance on federally backed home loans; established a center where people could apply for federal and state housing assistance; and worked with the North Dakota Community Foundation to coordinate a disaster relief fund, for which the bank served as the deposit base. The bank also reduced interest rates on existing family farm and farm operating programs. Families used these low-interest loans to restructure debt and cover operating losses caused by wet conditions in their fields.

To help finance the disaster recovery, the BND obtained funds at reduced rates from the Federal Home Loan Bank. These savings were then passed on to flood-affected borrowers in the form of lower interest rates.

The city was quickly rebuilt and restored. As a result, Grand Forks lost only 3 percent of its population between the 1997 floods and 2000, while East Grand Forks, right across the river in Minnesota, lost 17 percent of its people.

When the biggest private banks needed an emergency bailout, trillions of dollars in nearly interest-free money came flooding their way. Why? As Sen. Dick Durbin said of Congress in 2009, “Wall Street owns the place.” The private banking industry owns not only Congress but all twelve branches of the Federal Reserve. If we the people want the sort of security in emergencies that is available to Wall Street banks, we need to own some banks ourselves.

A publicly owned bank has both the tools and the mandate to bring real security to the community.

Unlike private insurers that are prone to withdraw coverage based on obscure technicalities, a publicly owned bank is not beholden to short-term shareholder profit-seeking and is free to act swiftly and generously in the public interest. And unlike federal disaster relief agencies, a public bank is not dependent on a penny-pinching Congress for funds. Like private banks, it has the ability to create money in the form of bank credit on its books, and it has access to low interest rates. A public bank can pass these low rates on to disaster victims and local governments.

A publicly owned bank has both the tools and the mandate to bring real security to the community. Twenty states have now introduced bills of various sorts to establish their own banks. For more information on the campaign in your state, see here.

Disasters, as Naomi Klein points out, are opportunities for capital to expand its grip on the necks of the people. But just as Occupy Sandy has pre-empted the official rescue agencies through community organizing, so a Public Bank of New York could pre-empt the vulture Wall Street banks and finance the rebuilding. What could be a more opportune time than now?