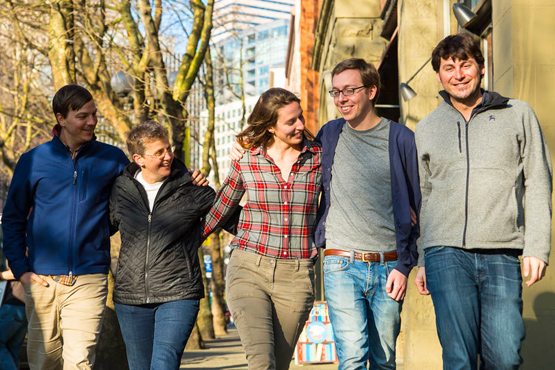 A newly formed company based in Seattle makes it easy to put your money to work in the local economy.
By David Rutherford
3 MIN READ

Community Sourced Capital is a newly formed lender that aims to apply the crowd-sourcing model to encourage the growth of locally owned businesses. The company’s founders—Rachel Maxwell, Casey Dilloway, Brent Cochran, and Meryl McDonald—say they were inspired by the growing desire to support local businesses among their friends and neighbors.

A balance between making a profit and building local businesses is essential to CSC’s business model.

“The hardest part is often not attracting shoppers once the project is off the ground,” Dilloway said, “but securing capital to get it started.”

All four founders are graduates of Bainbridge Graduate Institute, the brainchild of entrepreneur and conservationist Gifford Pinchot III and his wife Libba, and the first business school to offer an MBA in sustainable business. It was while searching for an entrepreneurship project that they noticed a gap in the thinking about how people can best support the local economy.

In 2012, the four decided to do something about that and founded Community Sourced Capital. They worked in a shared office space in a converted furniture store in the historic district of Pioneer Square, just south of downtown Seattle. Their idea was to harness the power of the connections that tie local people together—both on social media and in the physical world—to find people willing to loan money to small local businesses.

Lenders make funds available in $50 blocks, up to a maximum of $250 per project, and are acknowledged by the receipt of a pale-blue square card bearing the CSC logo, which identifies them as “Squareholders.” The funds are then made available to borrowers at zero interest, and loans are paid back at a rate based on the company’s revenue. CSC makes loans of up to $50,000.

After repayment, Squareholders can withdraw their funds or purchase a square in another project, allowing them to keep their money at work in their community.

In a number of ways, Community Sourced Capital’s business model departs sharply from that of traditional lenders. Because the staff of CSC aims to create a model that resembles the sharing of money between friends, borrowers are not required to provide collateral. By keeping capital within the local economy and basing their lending in personal trust, they hope to strengthen ties between businesses and their communities.

“The loans are simple enough that owners won’t get weighed down in complications,” Maxwell said, “which doesn’t make sense for a $50,000 loan anyway.”

And then there’s that part about zero interest. That may seem too good to be true, but president and director Casey Dilloway explains that CSC’s loans aren’t entirely free. Borrowers pay a campaign fee and a flat monthly membership fee when using the CSC platform, a system that Dilloway believes is more equitable than traditional lending schemes, as the fees allow CSC to make a profit without burdening their borrowers with interest payments.

That balance between making a profit and assisting its clients is essential to CSC’s business model. As a “social purpose corporation”—a company with social goals written into its articles of incorporation—CSC has a mission that goes beyond just making money. As the company’s mission statement puts it, “CSC provides a simple way for community members to lend money to the local businesses where they find the most value. Our unique take on crowd funding aggregates many small loans and turns them into one big loan for a business. We call those small loans Squares and the lenders Squareholders.”

In May 2013, CSC successfully funded two projects: Bainbridge Island-based Eleven Winery’s campaign for the planned automation of its bottling process, and Harmon Brewing Company’s new restaurant location at the Tacoma Narrows Airport. Both campaigns raised $20,000 from more than 60 squareholders.

As of mid July 2013, CSC has two active campaigns. For one, they hope to raise $15,000 to enable the Adrift Hotel on Washington state’s Long Beach Peninsula to add solar hot water and rainwater catchment systems and thereby lower their environmental impact. That campaign was less than $1,000 away from full funding at the time of this writing. The second campaign is for a Seattle deli called Delicatus, which aims to raise $9,000 to purchase new refrigeration units, beverage storage, and new hardware for their sales system. That campaign has already raised more than $6,000.

How Bicycling Is Transforming Business