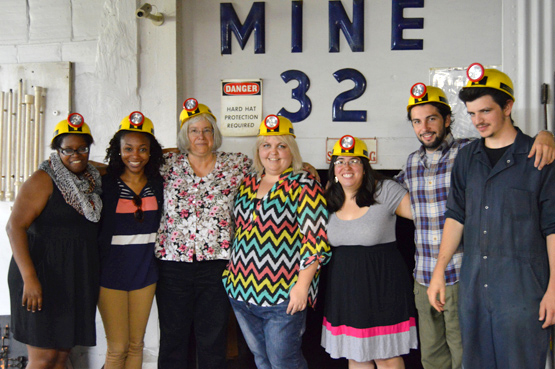 Highlander Center staff and Appalachian Transition Fellows don helmets in preparation for a trip into a mine at the Coal Mine Museum in Benham, Ky. Photo by Catherine Moore.

How do we transition to an economy powered by renewable energy without leaving the workers employed by fossil fuel companies behind?
By
2 MIN READ

This project was produced in partnership with the New Economy Coalition as part of the 2014 New Economy Week. Each day this week, YES! will publish articles responding to different topic prompts. Click here for more info.

Prompt 4: Combating climate change without leaving anyone behind.

Powerful interests divide communities by presenting a false choice between good jobs and a healthy environment. But the new economy rejects the idea that there isn’t enough to go around. The climate science is clear: we have to move quickly to a renewable energy economy. But we have to also move in the right direction by making sure that those people who have been employed and exploited by polluting industries are not left behind. How do we transition to an economy powered by renewable energy without leaving behind these workers, their families, and everyone who depends on them?

Our feature articles provide some insight:

Want more? Here’s a sampling of articles we’ve published at YES! related to this topic:

Back to the New Economy Week main page.

No items found
Reprints and reposts: YES! Magazine encourages you to make free use of this article by taking these easy steps.
Republish This Article