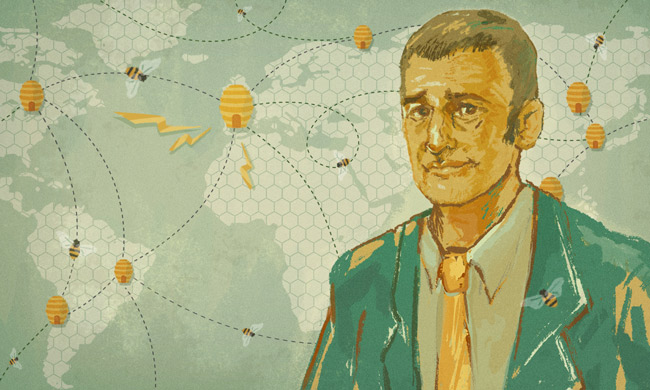 A conversation with Mondragon President Josu Ugarte on the future of the mega-cooperative.
By Mary Hansen
5 MIN READ

In early May, President Barack Obama visited Nike’s headquarters in Oregon to gather support for the Trans Pacific Partnership, a trade deal between the United States and 11 other Pacific Rim countries.

Critics of the deal have charged that it would increase income inequality, weaken labor and environmental protections, and encourage U.S. companies to offshore jobs. With its history of offshoring American jobs, Nike is an obvious ally for the deal, argues commentator Rose Aguilar at The Guardian.

But what if there were an alternative corporate model for the president and other world leaders to shape their thinking around? A model that was still globally competitive but empowered local workers and addresses income inequality?

Mondragon Corporation, a federation of 103 worker-owned cooperatives based in the Basque region of Spain, could provide an example. Unlike Nike, which is controlled by a small group of shareholders, ordinary workers are deeply involved in Mondragon’s decision-making process.

Mondragon made about €11.6 billion ($13.1 billion) in income in 2013. The corporation employs more than 74,000 people around the world. About 60,000 are worker-owners, or “associates,” who own assets in the company and can be elected to the General Assembly, the body that oversees the corporation.

With Mondragon, you won’t find the pay gap between executives and workers that are typical of multinational corporations. Managers at Mondragon cannot make more than six times the salary of their lowest paid workers.

Mondragon is not without its challenges. In 2013, it had to close Fagor Electrodomesticos, a member cooperative that manufactured domestic appliances and employed almost 2,000 people. But the way it handled that crisis shows how having workers in control makes a difference. Instead of sending the laid-off workers to seek unemployment benefits from the government, Mondragon retrained them and found new jobs for most of them at other member cooperatives.

YES! talked with Josu Ugarte, the president of Mondragon International, about cooperative values, how its member co-ops support one another, and how it interacts with its workers outside of Spain.

This interview has been edited.

Hansen: How is Mondragon different from other companies?

Ugarte: For us, people are the most important asset. For example, let’s say we have one business that makes a profit of 1 percent. We could move this business to China or Poland and have a profit margin of 7 percent. But we don’t do that. Social issues are important to us. It’s true that if we don’t have profits, we don’t have employment. But we combine economic issues with social ones.

And we created a different way, in my opinion, for co-ops to work together. Apart from sharing profits, ownership, and management, we have three key values: solidarity, inter-cooperation, and social transformation.

Hansen: When you talk about social transformation, what do you mean?

“The challenge is how to integrate our workers who are outside of Spain.”

Ugarte: Our solidarity in terms of salaries changes the distribution of wealth in society. If the Basque region in Spain were a country, it would have the second-lowest income inequality in the world. So for me, this is social transformation. And I think that instead of starting by asking the state for some things, you could transform the United States by creating cooperatives and then putting all of them together, with the principle “one worker, one voter.”

Hansen: Tell me about a challenge you’ve experienced with the cooperative model.

Ugarte: For me, the challenge is how to integrate our workers who are outside of Spain. Currently we have 71 percent of our sales in industrial activities abroad. And we think that in 2020 that number will reach 80 percent. So that means that a lot of our profits come from outside of Spain. We have 12,000 workers abroad. We should study how to integrate these people because they will become more and more important in Mondragon’s future. We need them to have a Mondragon mentality.

Hansen: And what is that mentality?

Ugarte: People come first in the Mondragon mentality. We’re transparent. And we want to have everybody participating in the company. But when we’ve tried to integrate workers in other countries, we couldn’t do that. For me this is the most important challenge.

Hansen: What do you think about international trade deals like the Trans Pacific Partnership?

“The argument is simple. It’s that you will be the owner of your future.”

Ugarte: Trade deals of that type tend to result in factories being moved overseas. Whereas Mondragon aims to keep existing businesses, while sometimes building new ones abroad. It’s the difference between delocalization and multilocalization.

Delocalization is moving businesses and destroying employment at home. For the United States, that’s normal. Mondragon cannot do that because we would need to vote in the general assembly. Our workers aren’t going to vote to eliminate their own jobs.

We see multilocalization as a winning strategy. In the end, if you have different factories in different parts of the world, the risk is reduced and performance is better.

For example, we have one company, Orkli, that has facilities in Spain, China, and Brazil. It’s a leading manufacturer of heating equipment, like water heaters and components for central heating systems.

Hansen: When did Mondragon first establish a plant outside of Spain?

Hansen: You mentioned that Mondragon’s workers outside of Spain are nervous about becoming worker-owners. Why do you think that is?

Ugarte: We’ve run into two different kinds of situations. For example, workers in Poland didn’t want to have to take on the additional responsibility. As I said before, if you are a member or associate, then you may be chosen to be part of the supervisory board, which is a serious responsibility. For example, you will help make decisions about things like changing salaries or work hours. The people in Poland did not want to take this kind of position. They prefer to work from 8 to 5 and forget everything.

Hansen: What are your arguments to try to convince them to become worker-owners or associates?

Hansen: What about closer to home? How do Mondragon cooperatives work together or support each other?

Ugarte: We help cooperatives negotiate with the banks. And we help when they have to relocate workers who’ve become unemployed. We contact the other co-ops and see if they can hire the people who are unemployed.

Hansen: Are there conflicts or challenges that arise with this kind of collaboration?

Ugarte: One thing I want to point out is that we’re a business, so we need to remain competitive. If we don’t do that, then we cannot create and share value. It comes up when one co-op needs to source supplies. If there’s another Mondragon company that makes those supplies, our manufacturer will ask them first. But if the price is not competitive, we’ll buy it from China.

The second point is that there are differences in the profitability of different companies within Mondragon. For example, if one company is turning a profit every year, then they are giving 30 percent of that profit to Mondragon. Then another company gives nothing because they are not making a profit. That can seem unfair. But the company that is successful today may have needed help 20 years ago. That is the best example of Mondragon and one of the keys of our success.

Is the Local Economy Too Local? Why Co-Ops and Credit Unions Need a Broader Strategy

What If Uber Were a Unionized, Worker-Owned Co-Op? These Denver Cabbies Are Making It Happen