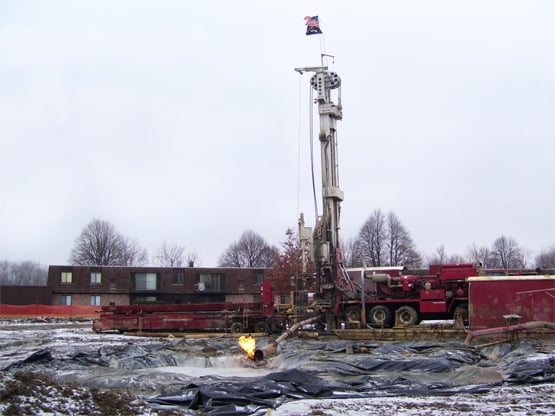 As oil and gas get harder to find, the industry is drilling in suburbia—and the neighbors aren’t pleased.
By Peter Pearsall
4 MIN READ

As rural deposits of fossil fuel grow fewer and farther between, extractive industries are increasingly siting their operations over the next best location: suburban neighborhoods. According to the U.S. Energy Information Agency, the Marcellus shale formation beneath parts of the Midwest and Appalachia contains literally trillions of cubic feet of natural gas—the most accessible of which often lies beneath residential neighborhoods.

Environmental injustice has come as a shock for many of Broadview Height’s mostly white, middle-class population.

Broadview Heights, population 19,400, is just south of Cleveland. The small town seems to typify Midwestern suburbia: tree-lined streets, vaguely familiar housing developments of recent vintage, and a median household income of over $70,000—significantly more than the state average of $45,000. Residents include former Clevelanders seeking a more peaceful place to live, where raccoons, deer, and wild turkey can be seen in their backyards.

But Broadview Heights is in the midst of a transformation. In 2004, the Ohio legislature passed a law effectively stripping local municipalities of their right to regulate the permitting, spacing, and location of oil and gas wells. This led to a spate of small fracking operations cropping up inside neighborhoods, which in turn has led to the flight of some residents. More than 70 gas wells have been drilled here since 2005—in some instances without the notification of residents living just 600 feet away, according to Truthout.

“I think this is a bold move for these companies, to drill in suburbs, but they feel empowered to do it,” says Elisa Young, founder of the anti-coal activist group MeigsCAN in Meigs County, Ohio. “The landmen quietly come in, get all their ducks in a row, and then they tell you, ‘This is a done deal. You can’t do anything about it.’”

Young notes that environmental injustice has come as a shock for many of Broadview Height’s mostly white, middle-class population. For many of them, she says, “It’s their first experience at seeing how these industries really operate.”

All of this means that Broadway Heights residents are now sharing an experience with the marginalized poor and with the residents of Indian reservations, where people have been dealing with similar situations for decades.

But, not least because the people of Broadway Heights have the means to leave, there are some important limitations to that comparison. “Most native communities really maintain a connection to their land, and there isn’t the ability or desire to just pick up and move when things change,” Young says.

“All it’s going to take is for the energy companies to pick on the wrong person.”

That’s not to say that a connection to the land is unheard-of among non-native people. As a “ninth generation Appalachian,” Young says she was raised with the idea that “every nook and cranny of our family’s land is our history, our heritage. It’s not so easy to walk away from that.”

It’s not just participants in Ohio’s anti-fracking movement who are talking about the new shared ground between indigenous people and middle-class whites. Anna Willow, an anthropologist at Ohio State University, is currently working on an ethnographic study that explores the social and cultural implications of fracking in suburban neighborhoods.

Based on a series of interviews conducted in 2012, the study focuses on how fracking affects Ohio residents’ feelings about their livelihood and community. While compiling her research, Willow—whose previous work was with Canadian tribal people familiar with industries like mining and logging on their ancestral land—noticed an interesting trend.

“A lot of the statements coming from these interviewees,” she said, “sounded similar to what we’ve been hearing from indigenous groups for hundreds of years now: expressions of fear, vulnerability, and disempowerment as the industries move in.”

The spread of fracking into suburbs might seem like a source of despair, but some are hoping that it could lead to bigger and better things by linking groups together into unusual alliances.

Geraldine Thomas-Flurer of the Yinke Dene Alliance, a coalition of tribes from British Columbia that formed in opposition to Enbridge’s proposed Northern Gateway Pipeline, says that the widespread push against exploitative resource extraction in North America— such as the Tar Sands Blockade, protests against the Keystone XL Pipeline, and movements to stop fracking—has forged collaborations unlike anything that had existed before.

“[The majority of] British Columbia is opposed to the pipeline—indigenous and non-indigenous together,” she said, citing a February poll by Insights West that found 61 percent of adults oppose the project. “It’s the first time in my history that I’ve seen these communities working side by side, and I’m happy about that—we’re not alone in this.”

What’s happening in British Columbia is unprecedented, she says, and bodes well for other parts of the world where similar clashes are taking place. “It’s clear that to fight these industries, everyone needs to speak up and support the movement. It’s not a First Nations issue. It’s a human issue.”

Kari Matsko, director of a grassroots initiative in Ohio called the People’s Oil and Gas Collaborative, agrees. The more people who are directly affected by fracking, she says, the stronger the resistance becomes.

“Regardless of status or demographic, people are experiencing firsthand the effects of this industry,” Matsko says. “All it’s going to take is for the energy companies to pick on the wrong person.”

Would Smokey the Bear Get Arrested to Stop Fracking?