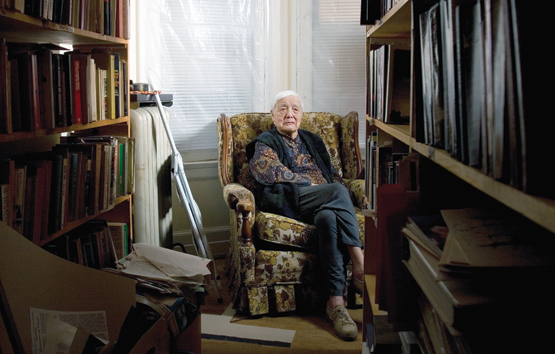 HOW TO BREAK THROUGH:
“We must be convinced that the power of ideas is greater than that of the Pentagon and political parties. We must embrace the conviction that each one of us has the power within us to create the world anew.”
Grace Boggs

Grace Lee Boggs died on Monday, October 5, 2015. We hope that this article, originally published in 2011, helps readers to remember her work.

Grace Boggs, 96, moves slowly with the help of a walker through her home packed with books, pamphlets, copies of articles, and things printed on paper. It’s a metaphor for her life. Moving slowly and thoughtfully through politics led her and her husband James Boggs to a philosophy of Marxist humanism focused on creativity, change, and social responsibility rather than a rigidity of ideas.

The long, unconventional life of activist-philosopher Grace Lee Boggs began in 1915 in Providence, Rhode Island. Born to Chinese immigrant restaurant owners, Boggs earned a Ph.D. at Bryn Mawr College in 1940 partly because anti-Oriental sentiments kept her out of work. She went to Chicago on a whim, got a job paying $10 a week in the philosophy library of the University of Chicago, and became involved with the Workers Party.

She married James Boggs, a divorced black auto worker, in 1953 after moving to Detroit to work at Correspondence, a socialist workers newsletter. Their lives together focused on the struggle for radical social change in Detroit and around the world. Since James’ death in 1993, Grace has moved away from confrontational politics and toward growing political consciousness through local community organization. Although she may struggle physically, her ideas still move comfortably among creative young people, black community groups, and leftist philosophers.

“Grace doesn’t talk down to you; she doesn’t come like that to young people,” says Invincible (aka Ilana Weaver), a spoken word artist and activist who was 21 when she met Boggs through Detroit Summer. “She comes to you with questions rather than lecture to find out what’s relevant to you and tries to relate to it. … My whole life has been transformed by my work with Detroit Summer. First of all as an artist I ground all my art in a larger purpose and vision for community change that’s led by the community.”

Boggs co-founded Detroit Summer as a way to help young people find meaningful activities when there is little work available, let alone positive influences in their lives. They paint murals, design T-shirts, teach digital media and other skills to create projects around social issues such as environmental justice, youth self-image, and school. One project, “Another Detroit is Happening,” used still photography and digital audio to document ground level community organizations working under the mass media radar.

“Here in Detroit the devastation of deindustrialization has made it possible for very ordinary people to grasp extraordinary ideas,” says Boggs, whose grassroots James and Grace Lee Boggs Center to Nurture Community Leadership is itself an extraordinary idea. “It isn’t often that an industrial empire collapses. The collapse of industrialization is the collapse of an idea that for 200 years has seemed to most people to be the epitome of civilization.”

Transformation and change are the essence of Boggs’ life. Part of this focus is the difference between rebellion and revolution. Rebellion involves physically seizing power over politics and economic vehicles, but revolution involves changing how you think and act based on those changes. These ideas came from involvement in the local community, activism on a global scale, and searching discussions with political activists of all stripes. Boggs has rubbed elbows with the likes of former Ghanaian leader Kwame Nkrumah but she is just as likely to take inspiration from a discussion with a local disabled teenager.

Over the course of her lifetime she’s had working relationships with the likes of black activist Malcolm X, social theorists C.L.R. James and Immanuel Wallerstein, singer Harry Belafonte, and actors Ossie Davis, Ruby Dee, and Danny Glover. Davis wrote the foreword to her 1998 biography Living for Change; Glover did the same for her 2011 book with co-author Scott Kuroshige, The Next American Revolution, Sustainable Activism for the 21st Century.

“Grace thinks,” says longtime friend Shea Howell, a professor of communication and journalism at Oakland University near Detroit. “Grace changes. She’s not the same person she was a day ago. She’s constantly reevaluating, thinking. She’s always open to new ideas. There aren’t a lot of people like that.”

Boggs’ influence now is wider than ever before. She has seeded or influenced projects from the Detroit Agricultural Network to the Beloved Communities Initiative, a network of creative communities across the country such as Barrios Unidos in Santa Cruz, Calif., Milwaukee’s Growing Power, New Mexico’s Tewa women, the Truth and Reconciliation commission of Greensboro, S.C., and others.

The words Detroit and agriculture might seem contradictory, but such is the visionary approach Boggs brings to any subject. Why not agriculture in a city with tens of thousands of vacant lots and a lack of access to fresh, healthy food? The image of Detroit is that of a rusting, post-industrial wasteland with a dim future. Most political and business leaders have been loath to try anything other than propping up the failing system. Boggs is far beyond that. She’s thinking about how the city is on the vanguard of the entire world going through its post-industrial trauma.

“She’s thinking about reshaping our city and how people on the local level can essentially transform their neighborhoods and create a new construct on the urban environment,” says Ron Scott, president of the Detroit Coalition Against Police Brutality and a member of the Boggs Center board of directors. “On the international level, she’s talking about the impact of the Arab Spring, what does that mean in terms of the shift of thinking about relationships and power on an international level.”

Although Boggs sees herself now as more of a resource person than an organizer, she stays in the middle of the action, participating in the ReImagining Work conference in Detroit this October. As the nation’s economic discussion anemically revolves around the concept of job creation, Boggs is less concerned with jobs than with exploring work that is meaningful to us as human beings.

“Unless we make a distinction between jobs and work we are going to be like Charlie Chaplin in Modern Times, appendages to a machine,” Boggs says. “How do we do the kind of daily activity that grows our souls so that we don’t have to make up for the indignities of our labor? Jobs are not the answer; jobs are the problem. Now we’ve reached a stage where creating things can be done by robots. So what we have to do is create ourselves. That’s what The Next American Revolution is all about, creating better selves.”

As Boggs nears 100 years she has probably seen more go down in the world than was possible in any other epoch. The temptation to look back over the years is inevitable, but Boggs is always open to exploring even the most painful issues.

“I don’t have that much longer to live so I have to think about what it is I have to do before I go gently into that dark night,” she says. “And what I’d like to do, I think, is help people understand that ideas and thinking historically and philosophically is as important to rebuilding a country and a community and making a revolution as activism. Most people
think of revolution as taking power from somebody else. And I think of revolution as transformation of ourselves.”

It isn’t such a big leap to move from growing food to growing souls. If that is the missing ingredient then there is a good chance that it will be added to the recipe for recreating the world. Boggs, through the wonders of electronic communications, is in contact with people around the world on a weekly basis. She hopes to have many, many people who are familiar with her style of philosophical thinking committed
to seeing the Boggs Center and the community into the future. Almost anyone who speaks about her says that Grace has changed their lives.

“I think Grace is a gift to the city,” says Howell. “She, perhaps more than anybody I know, thinks about Detroit as a place where the future is being created every day. At a time when all the old solutions are gone, she has enormous faith in the capacity of people to create something new. And that’s a gift.”