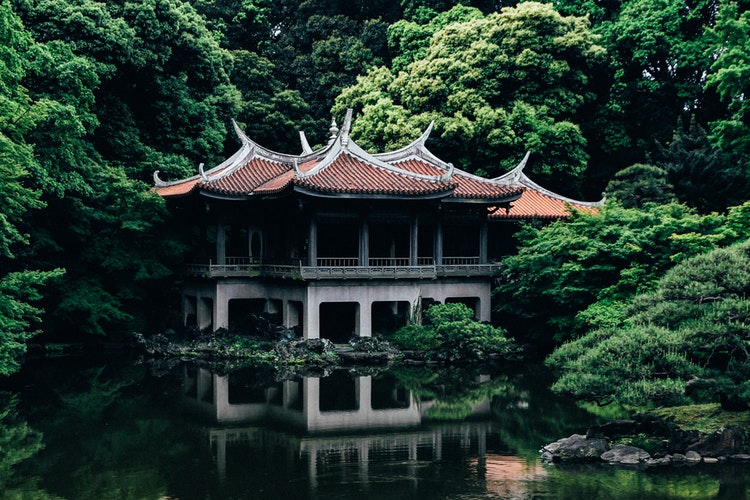 A polluted river in China becomes the site of a water park that provides a safe place for children's play, a celebration of water's beauty, and a cleansing of the water itself.

Betsy founded Keepers of the Waters in 1990, a project that brings together art and science to promote new ways of understanding water’s place in the global ecosystem. The biggest venture so far has been The Living Water Garden, a 5.9 acre park on the Funan River, which encircles the center of Chengdu, China, a city of nine million. Not only is the park a fully functioning water treatment plant, but it is also a giant sculpture in the shape of a fish that contains a multitude of smaller sculptures, a living environmental education center, a refuge for wildlife and plants, and a wonderful place for people.

Since it opened in April 1998, it has become the most popular park in the whole city. Betsy attributes this success to the fact that nature – and water in particular – is dynamic and always changing.

Keepers of the Waters

Betsy initially brought “Keepers of the Waters” to China in 1995. She invited Chinese, Tibetan, and American artists to collaborate on a public art project designed to raise awareness of the pollution in the Funan River. The artists staged public displays and performances that were televised nightly.

One performance image that was reproduced over and over in the media was of a group of women standing in the river washing long strips of white silk that became dirtier and dirtier the longer they were washed.

On the strength of that collaboration, the Director of the Funan River’s Comprehensive Revitalization Project, Zhang Ji Hai, later consulted Betsy on their five-year flood control and waste treatment plan, which included building walls and dams along the river and a 19 kilometer-long park system called the Green Necklace. Betsy suggested instead they build a park to give people access to the river and educate them about water quality. They invited her to return and help design that park.

In February 1996, Betsy returned to China with Margie Ruddick, a landscape architect who specializes in water remediation. Betsy and Margie spent the next month touring the riverfront with Chinese landscape architects and hydrologists, looking for an appropriate site for the park. The group chose the largest available piece of land, which happened to resemble the shape of a fish. Margie drew it with all the elements that the group came up with – pumps, settling ponds, reconstructed wetlands, and steps going down to the river to provide public access.

As design director, Betsy lived in China for much of the two years it took to build the water garden and worked together with a whole team of artists, scientists, engineers, and government officials. “The park is not mine,” she says. “That is a really important truth. We did it together.”

Although parks like this should and can be built everywhere, there is a good reason why the Chinese were able to grasp the idea so quickly. “Dependence on nature for well-being is integral to Chinese culture, their art, philosophy, teaching, and medicine,” says Betsy. In the last 30 years, China has also gone through an intense modernization; pollution of the air, land, and water is a major problem. Those older than 35 have clear memories of being able to swim and fish in rivers, so they are highly motivated to clean their environment. They also have a pride and deep love of China, which makes them want to have real solutions to the problem, not false ones.

A dead river comes to life

The Living Water Garden cleans only 250 square meters of water a day, not enough to affect the river water quality. Its purpose is to teach and inspire. People can walk everywhere in the park, delighting in the many birds, butterflies, and dragonflies that have taken up residence there and observing how the once dead river water becomes alive again. The water’s journey starts when it is pumped up a hill into the eye of the fish (the settling pond.) In the center of the eye (the iris) sits a living water drop fountain – a 13-foot wide, green granite sculpture of a living water drop, as viewed through a microscope. Betsy’s goal was to make it reveal the essence of water.

“It was very hard to make it,” she says. “Every single part of it had to be alive.”

The water then burbles through an aeration system, which is actually a series of sculptures called “flow forms.” They make the water move like a mountain stream, efficiently aerating it.

After that, it reaches a reconstructed wetland, which people can enjoy by walking on the nearby boardwalks. The wetland is a series of ponds containing specific plants that clean water, modeled on sacred mountain pools, where the water tumbles from pond to pond. The water then enters the fish ponds where it is further filtered and where the fish serve as living monitors of the health of the water. The water then meanders through the park past an open amphitheater. Before it returns to the river, there is a splash pond which draws children like a magnet. All through the park are forested areas, made up of over a hundred different plant species, some rare, to represent the biodiversity on Mt. Emei, a sacred Buddhist mountain located 160 kilometers outside of Chengdu. Still to be fully realized is the Environmental Education Center, which remains empty.

“If I had my dream,” Betsy says, “I’d like to raise money to be able to fund a bilingual environmental education director for two years to develop a model program.”

The Living Water Garden, successful as it is, contains only a fraction of the ideas that Betsy and the Chinese artists came up with. Her bigger vision is to create a dynamic visual language that reveals the human connection to nature and “brings it to our urban dwellers, who are the mass consumers,” she says. “The final stage of waste treatment can be an addition to every community instead of a hidden strange thing. If you make it into a wetland, you can make a park that will attract wildlife and can be a place for study. There can be so many things you can do that could make a city thrilling on a human scale.”

Since Betsy’s return from China in 1998, she has been busy spreading her ideas in the US. There are currently active Keepers of the Waters groups in Duluth, Minnesota, and Portland, Oregon. The Portland group sponsored a successful city wide workshop led by Betsy in September, 1999. They plan to design a series of living water parks to treat stormwater runoff and address such issues as the endangered salmon species, wildlife habitats, and brownfield treatment.