Restoring the Range: Can Beef Be Earth-Friendly? 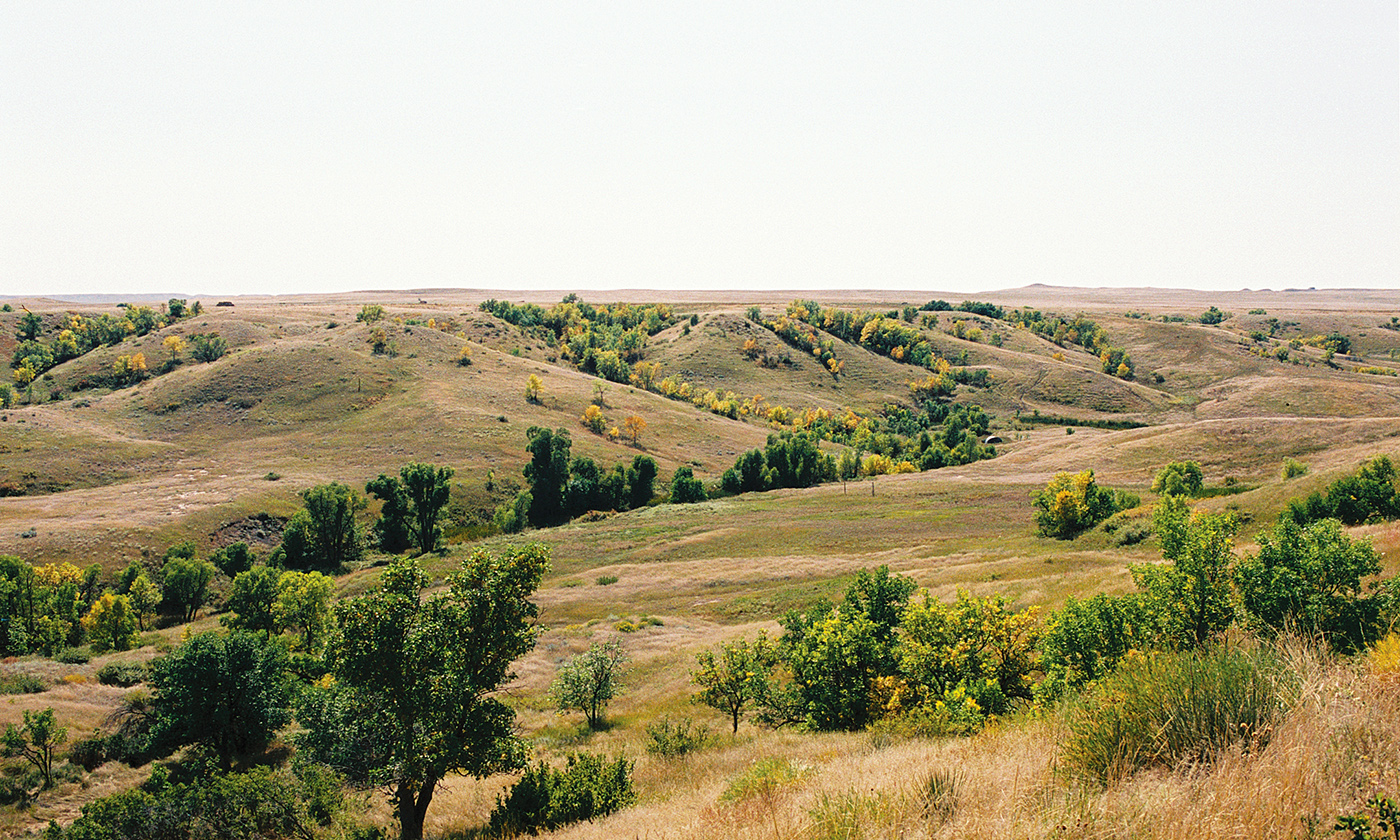 Healthy woodlands form habitat for wildlife on the Mortenson ranch, a landscape brought back to life by sustainable grazing.

Restoring the Range: Can Beef Be Earth-Friendly?

Here’s how one cattle ranching family in South Dakota restored a prairie, wildlife habitat, and a creek.

This article from the YES! Media archives was originally published in the Spring 2009 issue of YES! Magazine.

I first met Jeff Mortenson several years ago while working on a tiny reservation on the Big Sioux River in South Dakota.

The tribe I worked for wanted to protect some traditional food plants that grew along the river. An ecologist at South Dakota State University, Carter Johnson, told me about a family in the middle of the state, the Mortensons, who had restored large areas of grasslands and creeks on their land, and were running both a profitable ranch and a small native seed business.

When I phoned Jeff Mortenson and began asking questions, he said, “Well, I guess I better come out there.” Two days later he showed up and walked through tribal land with the tribe’s natural resources director and me. We stopped at an area of low ground along the river, thick with weeds, and he looked startled, “Oh, this place is very disturbed,” he said.

The word “disturbed” for a biologist means ecologically disrupted. But its colloquial usage often means crazy, and both meanings are apt for a farming system that’s taking a hard toll on the environment of the area. The Big Sioux collects water that runs off feedlots and fields. It’s full of sediment and has high concentrations of E. coli, the bacteria found in feces. When I lived there, sections of the river stank in the summer, smelling like urine, or rot.

The Mortenson family has found another way of working with watersheds. They are among a growing number of farmers and ranchers across the country who acknowledge that their food production is part of an ecosystem, shared with other plants, animals, and insects. As the country looks to clean up its act, its climate, and its waterways, their work may be a first step toward a saner model of animal agriculture for the future.

The Mortenson Ranch lies in the big rangelands and wheat fields of central South Dakota—a dry, undulating, and vast place. Jeff Mortenson’s father, Clarence Mortenson, a Lakota from the Cheyenne River Sioux Tribe and a fifth-generation rancher, was born in the 1930s, when harsh droughts ravaged the crops that homesteaders had planted in the area. When he was a child, the landscape he lived in was denuded, with barely a tree in sight. But an elderly neighbor told him that things had looked different decades before, with belly-deep grass dotted with waterholes and tree-lined creeks. In college, Clarence studied engineering, learned how water moved across landscapes, and understood it might be possible to recreate the central South Dakota grasslands that his neighbor remembered.

Clarence went into the cattle business with his stepfather. In the beginning, whenever it rained or spring snows melted, water used to flash across the ranch, sometimes carving out deep gullies. Clarence built small dams and dikes to slow water flow and stop erosion. He fenced to control where cattle moved and avoid overgrazing. As water collected behind the dams, it replenished the groundwater, and springs appeared on the property.

Over the years, they have continued to rotate cattle, scatter native grass seed, and plant thousands of trees. Now more than 90 percent of the 19,000-acre ranch is back in native vegetation.

Clarence’s sons stayed on the ranch, taking on parts of the business. In the 1980s, Todd Mortenson, Jeff’s younger brother, learned about “ holistic range management ” from a friend who managed cattle for the Cheyenne River Sioux Tribe, and decided to try it out on the ranch. Holistic management moves cattle across a range to mimic buffalo herds. In the spring, the herds graze on lush grasses along streambeds. While there, they stamp seeds into the ground with their hooves, speeding the establishment of trees and grasses and stimulating root growth. In summer, the Mortensons move the animals upland, which gives the stream vegetation time to resprout and flourish.

Proponents of holistic management say it dramatically increases soil health and vegetation cover. The Mortensons have seen such results on their own property. Over the years, they have continued to rotate cattle, scatter native grass and wildflower seed, and plant thousands of trees. Now they say more than 90 percent of the 19,000-acre ranch is back in native vegetation.

In the 1990s, researchers became interested in what the Mortensons were doing. Carter Johnson and his colleague Susan Boettcher studied the woodlands along the streams and documented an explosion of native tree and shrub species. A regional rural development organization found that the Mortensons had substantially reduced the amount of sediment flowing through the creeks on their land. The ranch also teems with wildlife and migratory birds.

See: A Farmer Rounds Up Monsanto

In 2001, Clarence Mortenson won awards from the Environmental Protection Agency and the Society for Ecological Restoration for restoring wildlife habitat.

The land management strategy is at least as much sound business as it is ecology. The Mortensons have been able to run twice as many head of cattle per acre as land in their area typically supports. During recent drought years, the Mortensons’ cattle fared better than their neighbors’, because the grasses were healthier.

Both Jeff and Todd Mortenson speak with reverence about “healing” the land. “Our Lakota grandmother taught us to think a different way about land,” says Jeff Mortenson, “to see it as a whole.”

But neither holds environmental views that are easily pigeonholed. Todd Mortenson is pragmatic about conservation: “It only makes sense to work with nature rather than against her, because it’s a hell of a lot cheaper to do things right than to do things wrong. You might get short term gain by abusing things, but it’ll come back and bite you. It’ll break you.”

He now runs the ranch operations and recently became president of the state’s ranchers’ lobby, the South Dakota Cattlemen’s Association, which has spoken out against regulating greenhouse gas emissions under the Clean Air Act, over concerns about how it might economically impact family-run ranches.

This brings us to an inconvenient truth about beef.

Like most ranchers, the Mortensons send their cattle to a feedlot to be fattened. The average diet of feedlot cattle is 70 percent corn, mostly grown in row-crop operations using large amounts of fossil fuel to make fertilizer, run farm equipment, and transport feed to cattle and cattle to feedlots. More than half of the nation’s corn crop is produced to feed animals.

The alternative to feedlots is to let cattle do as the bison did for millenia—just eat grass. Grass-fed cattle have a much lower carbon footprint than their feedlot-raised counterparts, because their food, for the most part, doesn’t need to be fertilized, sprayed, or trucked from place to place. According to one analysis by the Institute for Environmental Research and Education, a grass-fed cattle operation can actually be carbon-neutral when combined with holistic management. The carbon that gets stored in soils and plant roots balances out the methane, a powerful greenhouse gas that cattle naturally produce in large quantities. The Chicago Climate Exchange even sells carbon credits for ranches that use holistic management.

As the country responds to climate change, many environmental groups suggest that the cattle industry as a whole will need to convert to a grass-fed model.

But feeding grass to cows is not so simple in a modern agricultural market. For one thing, the feedlot system is cheap. Federal subsidies keep feed corn prices down, lowering operating costs of feedlots and giving the industry a $500-million break every year, according to researchers at Tufts University. For another, a great deal of private and government research money has poured into refining the industrial feedlot system, while only a small group of pioneering ranchers and researchers has been sorting out the nitty-gritty of how to effectively run a grass-fed business.

Todd Mortenson is thinking of joining that group. “The key to grass-fed beef is to make sure they’re always gaining [weight],” he says. “I haven’t figured out how to put pounds on cattle in this harsh environment. I think it can be done. It’s something that I’m not going to quit working on.”

As the country responds to climate change, many environmental groups suggest that the cattle industry as a whole will need to convert to a grass-fed model. However, some insist this transition will necessarily lower meat production because there is simply not enough land to support as much beef as Americans consume. “We’ve got to stop eating so much meat and realize that it’s expensive no matter what way you produce it ,” says Danielle Nierenberg of Worldwatch Institute. Holistic Management International, a group that promotes sustainable grazing, disagrees, claiming grass-fed ranching is more efficient and inherently more productive.

Perhaps the most valuable lesson from the Mortenson Ranch is that sustainable agriculture works better when it integrates all parts of the ecosystem, instead of trying to isolate the crop or the animal.

“You don’t operate in a vacuum,” says Todd Mortenson. “In Mother Nature, everything is interconnected . You want a diverse landscape, because it can support more wildlife, more plants, and more native bees and pollinators. That benefits my livestock because there’s always something that’s palatable, during any season.”

Diversity beyond the field edge is valuable in crop systems too. California farms that have restored wetlands and established hedgerows of native plants at the edges of fields have documented increases in native pollinators and beneficial insects and higher yields of crops like tomatoes, according to the Wild Farm Alliance. And they’ve seen dramatic reductions in water pollution.

Animals and plants, wild and domestic, evolved as part of a system. One of the jobs of sustainable agriculture is to put that system back together.