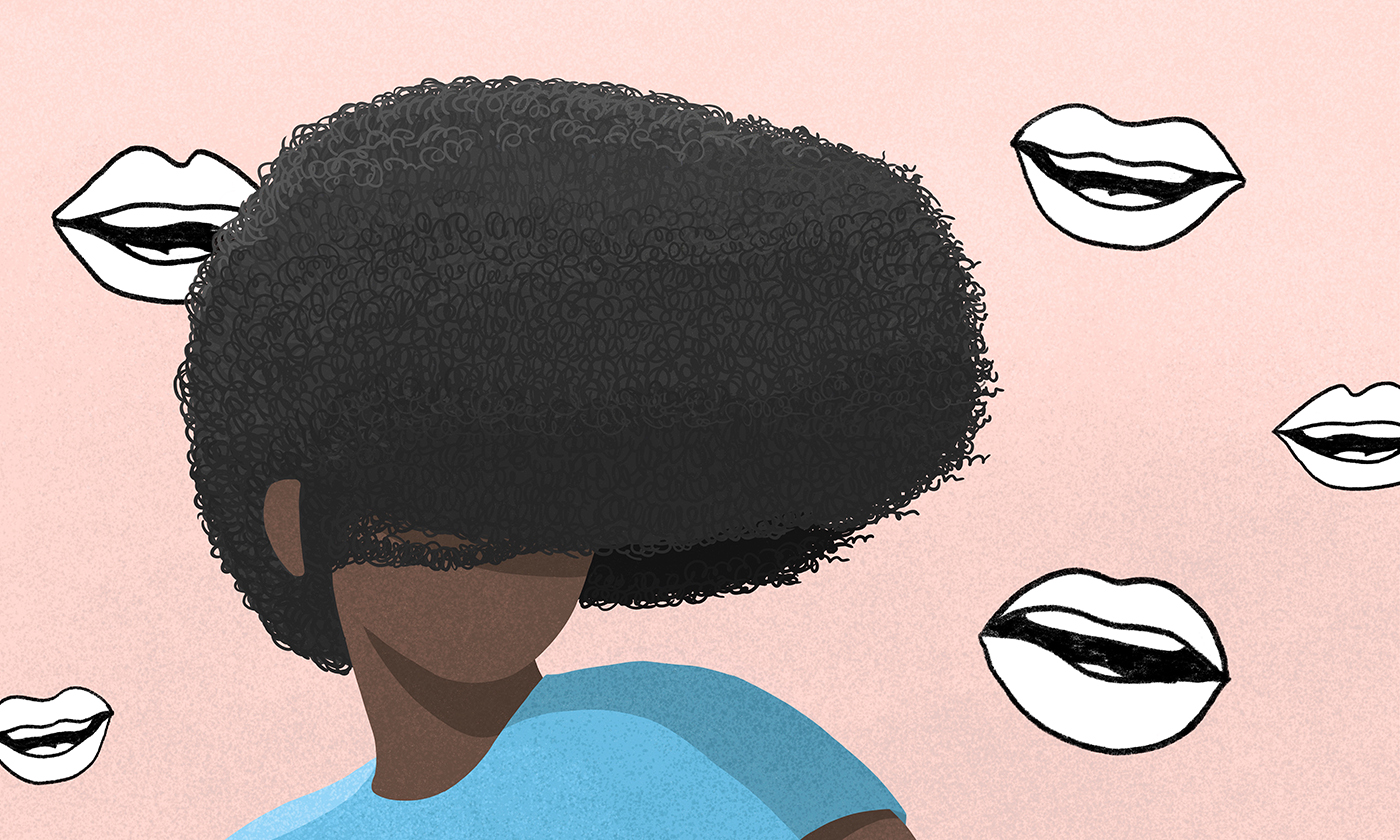 White people find my halo of gravity-defying hair irresistible to the touch. I don’t mind as long as they ask before they cop a feel, but they usually don’t. So after years of enduring this overfamiliarity from everyone from the stranger behind me in the checkout lane to a middle-aged male dental hygienist, I came up with a strategy.

Now when that unbidden White hand starts creeping toward my head, mine starts creeping toward theirs. I go as far as they go. They usually flinch back, and then resignedly lean into my touch, laughing with recognition as their faux pas—their microaggression—sinks in. I laugh along with them—because let’s keep it light, right?—and with a little thrill of victory. Teachable moment, for the win!

Unfortunately, unsanctioned hair touching is the only microaggression that I have an effective, emotionally non-burdensome response for. I’m not the only one with such a limited repertoire. I tried tapping my social network to see how other people effectively dealt with microaggressive interactions and got precisely zero feedback—though, admittedly, just tweeting about them seems to work for some people. Many of the ideas I found online seemed to be intended for use in a fantasyland, where White people are eager learners, unafraid of Black, Indigenous, and people of color (BIPOC), and need actual reasons to call the cops on us. Other tips violated a seminal rule of BIPOC-ness: thou shalt not waste emotional labor educating White people about stuff they should already know or can Google.

Finally, I turned to the experts.

Microaggression is classically defined as, “brief and commonplace daily verbal, behavioral, or environmental indignities, whether intentional or unintentional, that communicate hostile, derogatory, or negative racial slights and insults toward people of color.” The term was coined around the late 1960s, early 1970s, after the Civil Rights era, when visible and violent expressions of racism were eclipsed by subtler incarnations. Now broadened to include all marginalized groups and their many intersections, “microaggression” has become something of a buzzword within the social justice arena.

And as with most buzzwords, the meaning gets diluted at best and ignored at worse. But that doesn’t erase the harmful impact. In his new book, How to Be an Antiracist, Ibram X. Kendi stridently insists that microaggressions are nothing but “racial abuse” and should be called that.

Most experts agree on the frequency and continual fallout of microaggressions for the “astoundingly high number” of BIPOC who endure them.

Derald Wing Sue, Ph.D., a professor of psychology and education at Columbia University and scholar in the field, writes that microaggressions cause frustration, self-doubt, anxiety, and cumulative emotional, psychic, and spiritual burden. Unlike macroaggressions, large-scale, overt aggressions that mostly occur at the systems level, Sue writes, microaggressions are interpersonal, and often occur in academic and professional settings.

Joy Petway, a licensed social worker in Maryland, has witnessed these responses in some of her Black female clients.

It can be difficult to distinguish microaggressions from typical rudeness.

“And because of that, there is increased anxiety… over-trying to perfect what one is producing, being ‘on’ [and] internalizing negative messaging,” she says. “Untangling these messages while also trying to find motivation to go into places of work that often aren’t feeding mind, body, soul, becomes a very difficult thing to maneuver.”

Despite the evidence, there are nonbelievers who contend that the notion of microaggressions is simply out-of-control political correctness. This argument itself is a microinvalidation—one of three categories of microaggressions identified by Sue. Microinvalidation, basically ignores the lived experiences of historically marginalized groups. That perennial favorite, “I don’t see color”—something well-meaning White folks say, often defensively when they are called out on a prior microaggression—also falls into this category.

“What they’re in essence saying is that they don’t want to judge people on the color of their skin,” Sue says. “What they don’t realize [is] recognizing me as an Asian American is important, because it’s an intimate aspect of my racial, cultural identity.”

“The question therefore is, whose reality is the most accurate reality?” Sue says. “Social psychologists have provided research to indicate that the reality of people who are most marginalized or oppressed is most accurate as to the oppression that is going on.”

This makes sense, he continues, because people from marginalized communities are in a position where they must understand the people who “have the power and privilege” to succeed socially, academically, and professionally. White people—in particular cis-gendered, heterosexual White men—simply do not. “The implication is clear to me that people who most have their voices oppressed and silenced are the ones who have to be heard. … So it would be incumbent upon White individuals to really be nondefensive and listen and try to understand [the impact their behavior has on people of color].”

And this is where the influence of power, privilege, and oppression really works against individuals. So it would be incumbent upon White individuals to really be nondefensive and listen to try to understand what is going on. Because people of color know that microaggressions are occurring, but it’s completely invisible to those individuals who are what we call perpetrators.

“The power of racial microaggressions lies in their invisibility to the perpetrator.”

So how does one disarm microaggressions without exceeding their emotional bandwidth?

Denise Evans, a certified facilitator of implicit bias and cultural intelligence workshops in West Michigan, uses wittiness to disarm microaggressions, of which she has experienced many. For example, when a White person “compliments” Evans, who is Black, for being well-spoken or articulate, she responds in kind.

“I have said, ‘Thank you very much, so are you,’” says Evans. She then asks, with a smile, why they felt the need to say anything, including a list of possible reasons in her question: Is it because she’s a native New Yorker? A woman? Black?

“And I literally wait for [an] answer,” she says. “I give people their microaggression and their implicit biases back in a pretty box with a nice bow on it. I hand it to you, and I wait for you to open it and tell me what you see.”

Evans is at heart an educator and uses these teachable moments, she says, to expose the unconscious associations people have. For example, linking “African American” and “uneducated” or “women” and “assistant.” This is an approach rooted in the hidden-bias research of Harvard University psychologist, Mahzarin Rustum Banaji. Human brains may instinctively make associations for survival, Evans says, but we can choose to dismantle them.

“All the research tells us that our brains are malleable and that we can form new synapses. I feel like it’s my responsibility to help disrupt what’s happening in your amygdala,” Evans says, tongue in cheek. “Let me just help you separate some of these thoughts real quick.”

Her approach typically results in White bewilderment, not fragility or combativeness, she explains.

I know that I would feel uncomfortable responding to microaggressions so directly. Avoidance is a legit strategy in the case of possible physical harm, but my silence usually stems from my being too stunned to generate a snappy comeback or not being entirely convinced that I was actually “microaggressed.”

There’s no statute of limitations on addressing microaggressions.

And I’m not alone.

This is apparently common among targets of microaggressions, and this confusion is a significant part of why they are so damaging. “The power of racial microaggressions lies in their invisibility to the perpetrator and oftentimes to the recipient,” Sue, and colleagues, wrote in a 2007 article. And this is why a key strategy for dealing with microaggressions is “making the invisible visible.”

By “naming” a microaggression, a concept Sue borrows from Paulo Freire’s seminal work, Pedagogy of the Oppressed, we are able to undercut its power and expose metacommunication behind it.

For example, pointing out that “where are you from?” is really code for “you aren’t American enough” or “I have Black friends” really means “what I just said isn’t racist and neither am I” social worker Petaway says. And doing this doesn’t have to be educational or immediate, she adds.

Sometimes it’s as simple as saying, “your bias is showing” and walking away, a response Evans often has to microaggressions, especially those from women.

But the burden of responding shouldn’t solely rest with the target of the microagression.

Writer Leslie C. Aguilar’s suggests targets or bystanders can just say “Ouch!” Interrupting and redirecting conversations heading toward biased territory with, “Whoa! Let’s not go there!” can also do the trick, particularly when delivered by allies who share commonalities with the speaker.

Aguilar’s suggestion resonates most with me. Unlike Evans, who is an ordained minister and educator, I don’t feel a calling to educate perpetrators. I already manage depression and anxiety, and now they’ve just said something that hurts. Why should I have to sink more emotional labor into an already fraught situation?

But research indicates that avoidance, when there is no threat of bodily harm, may not be the best course of action and that eschewing resignation brings rewards, including feelings of bravery, dignity, and self-efficacy.

There’s also the bonus that I’m less likely to mull over the situation ad infinitum.

However, Petway assures me, I can respond when I want, how I want. There’s no statute of limitations on addressing microaggressions.

“It’s really taking back our time and focusing on our boundaries,” she explains.

If it’s not addressed in the moment, that doesn’t mean it can’t be addressed later.

“There is no one asking you to give beyond the wellspring that you have,” Petway says. “So if you don’t have it to give, then do not give [it].”

Why Irish Americans Should Embrace Their Culture of Colonial Resistance

SCOTUS: Trump Is Not Above the Law

When They Shot Terence Crutcher, This Time I Watched